Movie fans look ahead to 2022, and no surprise they're most looking forward to new superhero movies! 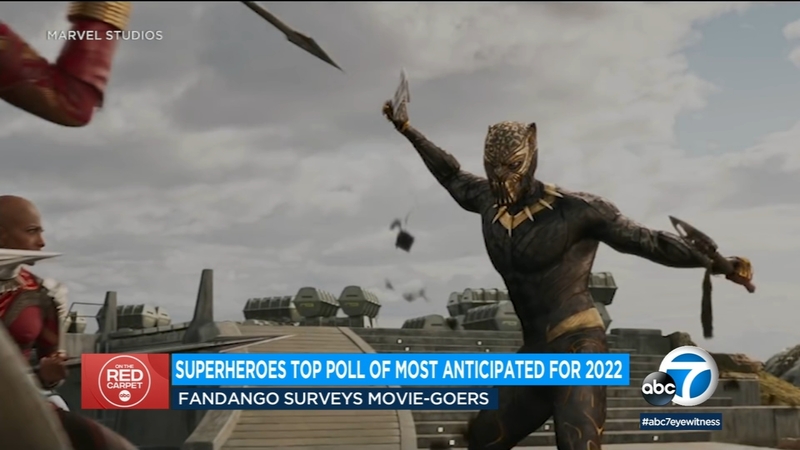 Here are the movies we're looking forward to in 2022

HOLLYWOOD -- Superheroes will dominate the big screen in 2022. The online ticket retailer Fandango surveyed more than 6,000 movie ticket-buyers to find out which films they can't wait to see in the New Year.

The film with the most "buzz" right now is the sequel "Black Panther: Wakanda Forever." Right now, it is set for release next November.

It's followed by another sequel, the animated version of the Spider-Man series: "Spider-Man: Across the Spider-Verse" which we'll see next October.

The anticipation is also strong for "The Batman." This time around, we'll see Robert Pattinson putting on the cape and cowl on March 4.

Another favorite from the Marvel Cinematic Universe is fourth on the list: "Thor: Love and Thunder" bolts into theaters in July.

And summer will also mark the return of everyone's favorite dinosaurs for another highly anticipated sequel, "Jurassic World: Dominion."

We saw Dr. Strange in "Spider-Man: No Way Home" but he returns again next May to topline "Doctor Strange in the Multiverse of Madness."

Rounding out the top 10 on Fandango's list: "Avatar 2," "Aquaman and the Lost Kingdom," "Top Gun: Maverick," and "Mission: Impossible 7."

Fandango also asked fans about the most anticipated returning performances for next year. The top five includes Chris Hemsworth as Thor and Natalie Portman as Dr. Jane Foster in "Thor: Love and Thunder;" Benedict Cumberbatch as Dr. Stephen Strange and also from "Multiverse of Madness" Elizabeth Olsen as Wanda Maximoff/Scarlet Witch. Plus, Zoe Saldana returning as Neytiri in "Avatar 2."

We will finally see that sequel in December of 2022. And one piece of good news for all movie studios: Fandango's poll showed 80% of those surveyed hope to see five or more movies on the big screen in 2022.