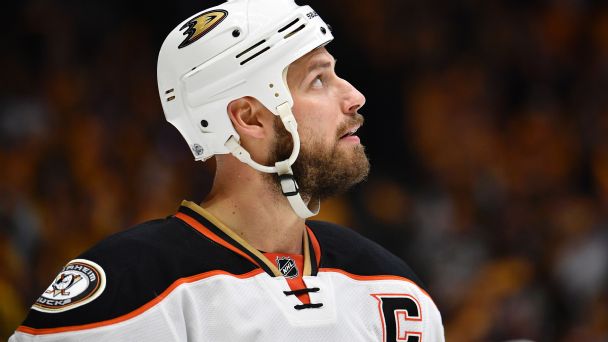 Biggest changes: The deepest club in the division returns with its roster mostly intact. Defensemen Shea Theodore and Clayton Stoner were traded to or chosen by the expansionVegas Golden Knights, but winger Patrick Eaves, an acquisition before the trade deadline, re-upped for three more seasons, ensuring Anaheim would bring back much of the roster that finished two wins shy of an appearance in the Stanley Cup Final. The club also upgraded its backup goaltending by signing veteran Ryan Miller.

Case for: Bringing back a core that might have advanced to the Cup Final had No. 1 goaltender John Gibson stayed healthy, the Ducks have their sights set on taking the next step. They cleared a big hurdle with their series-clinching win against the Edmonton Oilers in the second round, their first Game 7 win at home after losing four straight games in that situation. Last season's deep run has captain Ryan Getzlaf thinking about the 2006 playoff push, in which the Ducks lost in the conference finals but rebounded the following season to win the Stanley Cup. "We want to go into camp with that same mentality we had in '07," Getzlaf said. "We have something to prove and we want to take this thing all the way this year."

Case against: Anaheim will be far from healthy after the season kicks off. Defensemen Hampus Lindholm and Sami Vatanen will each miss the first few weeks after suffering shoulder injuries during the playoffs. But the biggest loss will be center Ryan Kesler, who could be out until Christmas at the earliest. Kesler is the engine behind one of the league's most reliable two-way lines alongsideAndrew Cogliano and Jakob Silfverberg. If the Ducks struggle out of the gate without these key players, it could be tough for them to find their footing. Once they get healthy, the Ducks will be among the favorites to advance in the West. But emerging from that conference won't be easy. The Central Division features some of the league's most battle-tested clubs in the Nashville Predators, Chicago Blackhawks and St. Louis Blues, and the Ducks will inevitably have to go through up-and-coming clubs in the Calgary Flames and Oilers. Each club holds a decided advantage over Anaheim when it comes to speed and quickness. Led by the league's most dynamic player in Connor McDavid, Edmonton took Anaheim to seven games in the second round last season and no doubt has revenge in mind. If they want to compete with the improving Oilers and Flames, the Ducks will need to improve their power play, which ranked 17th during the regular season before Anaheim posted a disappointing 13 percent success rate in the postseason.

Trade bait: Expected to be selected in the expansion draft, Vatanen has been the subject of trade speculation for months. Although general manager Bob Murray found a way to keep the Finnish blueliner away from Vegas, Vatanen could still be targeted in a potential trade, particularly with young defensemen Cam Fowler and Lindholm signed long-term and prized prospects Josh Manson and Brandon Montour entering restricted free agency next summer.

Goalie situation rating: 8. Gibson is on his way to truly establishing himself as a franchise goalie, and this could be the season he makes that leap. Signing Miller gives the Ducks greater stability in their backup role after Jonathan Bernier disappointed while starting in place of the injured Gibson in the conference finals.

Scout's take: "They have goaltending with Gibson, if he can stay healthy. I think their defense is really good. I'll tell you this about Ryan Getzlaf, and I think he's got lots in the tank: When the game is on the line and the game is most important, Ryan Getzlaf is able to raise his game to an unbelievable level. They've got a really good group of guys."