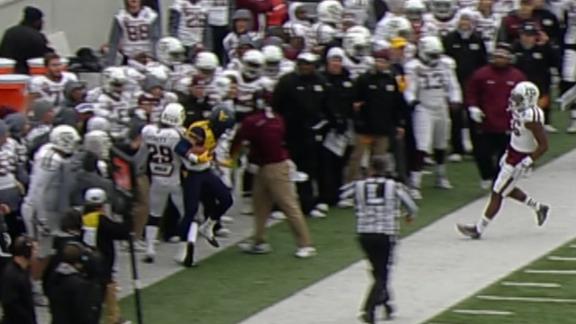 Cameras showed Richardson striking West Virginia players who ventured out of bounds during the first half on two separate occasions. He used his elbow to strike Mountaineers cornerback Daryl Worley in the back of the head and shoved running back Andrew Buie in another incident.

Sumlin was made aware of Richardson's actions at halftime and told Richardson to remain in the locker room for the second half of the game, according to school officials. After the game, Sumlin said Richardson was sent home and he'll decide on further action when the Aggies return to College Station, Texas.

A class of 2012 signee out of DeSoto (Texas) High, Richardson played linebacker as a true freshman for Texas A&M before suffering a career-ending neck injury in a Nov. 17, 2012, win over Sam Houston State. He had surgery shortly thereafter and has served as a student assistant coach for the Aggies since his playing days concluded.

Worley commented on Richardson's actions on Twitter after the game.