Angels release 3-time MVP, 10-time All Star Albert Pujols after nearly a decade with the team 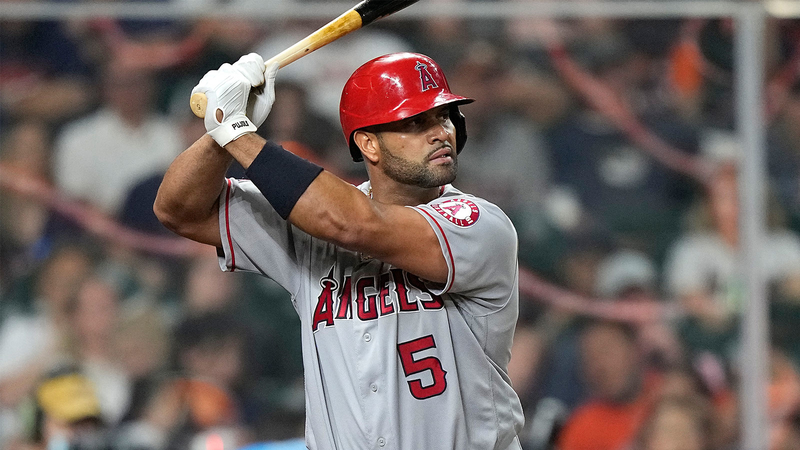 ANAHEIM, Calif. (KABC) -- Two-time World Series champion and 10-time All Star Albert Pujols was released by the Angels on Thursday, the team announced.

"The Angels Organization proudly signed Albert Pujols in 2011, and are honored that he has worn an Angels jersey for nearly half of his Hall-of-Fame Career," team owner Arte Moreno said in a statement.

Pujols himself did not immediately comment on his release, which came in the final year of his 10-year contract with the team.

Angels executives discussed the move at an afternoon press conference on Thursday.

"Albert is not a bench player," said general manager Perry Minasian, the club's first-year GM. "Him being on the bench would not do him any good, and would not do the team any good. He's as motivated as he's ever been. If the situation was different and there were at-bats for him to play here, it would be different."

Minasian said the decision to cut ties with Pujols was "really difficult. These are never easy, especially with a guy like this who loves the game as much as anybody I've ever met, who works as hard as anybody I've ever met. But since I've taken this job, to me it's about what's best for the organization moving forward. It really weighed on me. I think it weighed on all of us."

Late last month, Pujols said he'd felt stronger since completely cutting out meat a few years ago, though he has gradually reintroduced some meat back into his diet while relying more on a fish-based diet.

He may have missed the playoffs this year, but L.A. Angels star Albert Pujols and his wife, Diedre, kept busy by launching Open Gate Kitchen, a new cafe concept that offers vocational training, life coaching and job placement to those in need.

"I feel great," Pujols told MLB.com. "This is probably the best I've felt in a while. I think part of that is the training I put in this offseason. When you're breaking down or feeling injuries, you can be doing nothing at home and feel sore. But you know you're healthy when you're able to train in the gym and move weights. It's something that I continue to do."

At the time, Angels manager Joe Maddon said he had been impressed by Pujols and believed his underrated flexibility had helped him stay on the field in recent years. Pujols had essentially been injury free since a left knee injury ended his season on Aug. 28, 2018.