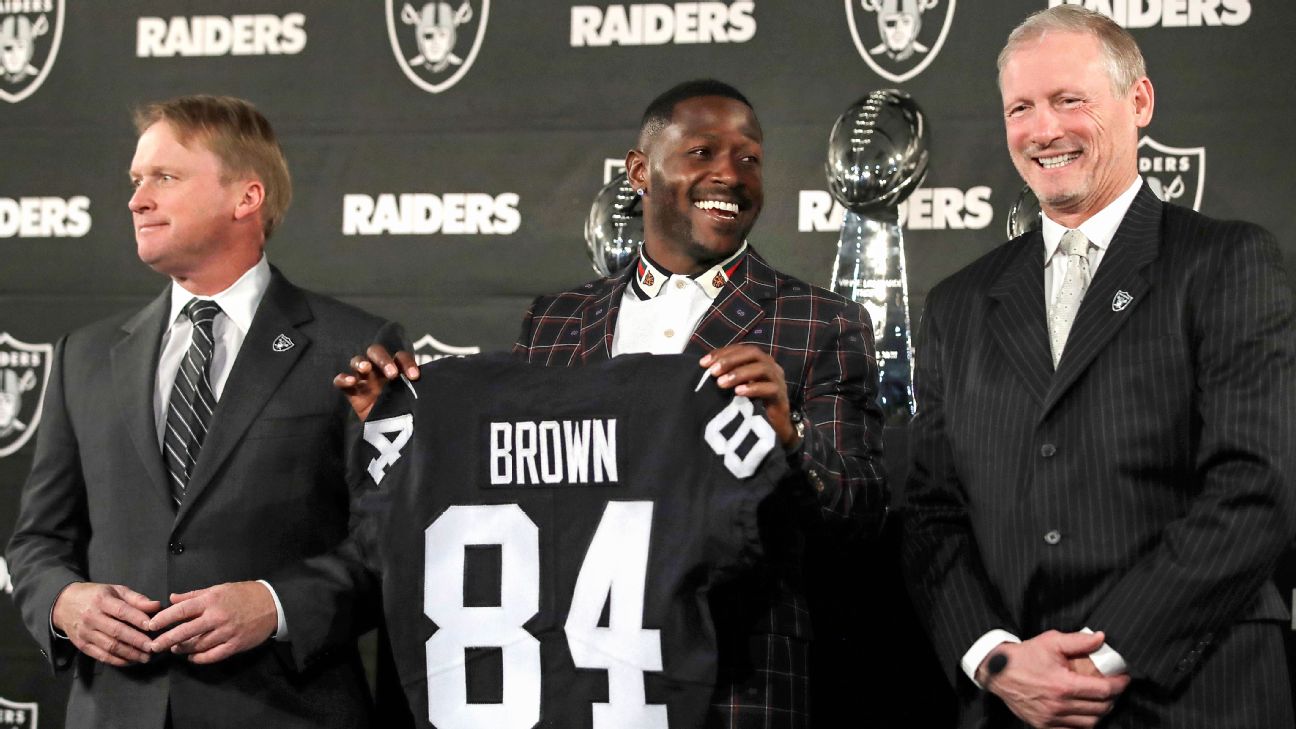 It was a short but exhausting run for Antonio Brownwith the Oakland Raiders.Just this week, the team went from being on the brink ofsuspending himto a Brown apology thathad himpoised to play on Mondayto his release on Saturday.Here is a timeline of Brown's high jinks and histrionics:

March 13: Antonio Brown introduced in Oakland after being acquired in a trade with the Pittsburgh Steelers for a third- and a fifth-round draft pick and given a three-year, $30.125 million extension. "I bring accountability," Brown said. "I bring actions. Not what I say, what I do. How I approach things."

May 28: Brown is impressing coaches and teammates alike in OTAs and says coach Jon Gruden has challenged him. "It's never a dull day with Coach," Brown said. "Always challenging, always high energy and always detailed and fundamental in regards to our assignment."

July 25: Brown shows up to Napa, California, for training camp with frostbite on the bottom of both feet due to a cryotherapy mishap earlier in the month in France due to Brown not wearing the proper footwear.

July 26: Brown takes a hot air balloon ride at dawn over wine country to kick off training camp but is later in the day placed on the non-football injury list.

July 28: Brown activated from the non-football injury list and participates in pre-practice walk-through.

July 30: Brown participates in the first half of practice and puts on a show before shutting it down and leaving the field and facility early. He will not return for two weeks as he seeks treatment for his feet and in protest of the NFL banning his 10-year-old Schutt Air Advantage helmet for safety reasons.

Aug. 13: Brown returns to Napa, saying it was good to hear of general manager Mike Mayock and coach Jon Gruden supporting him in his absence.

Aug. 15: Brown and QB Derek Carr put on a show in pregame warm-ups in Arizona, though Brown does not play in the game.

Aug. 18: In the wake of losing his first grievance to wear his preferred helmet, Brown takes off from Napa again and is fined $40,000 by Mayock for the unexcused absence. Mayock later tells reporters that it is time for Brown to either be "all-in, or all-out."

Aug. 19: Brown returns to Napa as the Raiders break camp and head to the team facility in Alameda.

Aug. 22: Brown and Carr put on another show in pregame warm-ups in Winnipeg, Canada, and ask Gruden if they can run one play in the game against the Green Bay Packers, a go-ball. Gruden quickly declines as neither plays in the game, which was held on an 80-yard field. Brown skipped a mandatory pregame walk-through.

Aug. 25: Brown loses his second grievance to wear his old helmet, but agent Drew Rosenhaus insists the receiver will find a new helmet, get an endorsement deal, and play on.

Sept. 4: Brown, who once shared on Facebook Livea postgame Steelers meeting with coach Mike Tomlin, posts to Instagram the letter sent to him from Mayock detailing his fines from Aug. 18 ($40,000) and Aug. 22 ($13,950). Brown tags the Raiders in his response, which reads, in part, "When your own team want to hate."

An agitated Brown, who usually stretches on his own during team stretch, skips the period entirely before emerging for individual drills. He goes through them halfheartedly, taking some plays off, barks at a strength and conditioning coach and fires a football into a fence after catching a pass from Carr and jogging to the end zone. Later, Brown reportedly gets into a confrontation with Mayock on the practice field. In the locker room, Brown tells two reporters he will speak on Thursday. Later, Brown announces he has reached a deal with Xenith to wear their helmet, posting, "Most calculated move by far."

Sept. 5: Reports break that the Raiders will suspend Brown for conduct detrimental to the team, setting the stage for a potential battle over his guaranteed money and putting in question whether Brown will ever play for the Raiders.

"Antonio Brown's not in the building today; he won't be practicing," Mayock said. "I don't have any more information for you right now, and when I have some and it becomes appropriate, you guys all get it. I promise you. But that's it for today."

Sept. 6: Brown is back in the building. The wide receiver issued "an emotional apology" at a team meeting Friday morning, a source told ESPN. Gruden issued a statement later in the day, saying in part: "Antonio is back today. We're excited about that. Ready to move on."

Gruden said "the plan" was to have Brown in the lineup for the season opener against the Broncos on Monday night.

Later in the day Brown posts a youtube video featuring a phone call between Brown and Gruden.

Sept. 7:The Raiders fine Brown more than $215,000for conduct detrimental to the team.By fining Brown, the Raiders voided the $29.125 million worth of guaranteed money in his deal, sources said. Brown says there is "no way" he plays after losing guarantees. Brown asks for his release via Instagram. At noon ET, the Raiders released Brown.

After the move becomes official with the league shortlyafter 4:01 p.m. ET, Brown comes to an agreement in New England, agent Drew Rosenhaus confirms to Adam Schefter at 5:19 p.m. The one-year deal is worth up to $15 million, Rosenhaus said. It includes a $9 million signing bonus, $10 million guaranteed and $5 million in incentives. 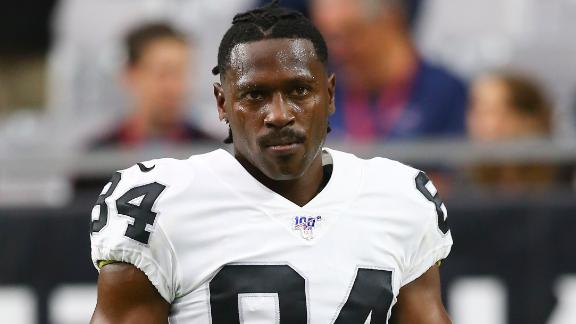