Art of college football trolling: Arkansas, Fresno State, others get spicy with their social medi... 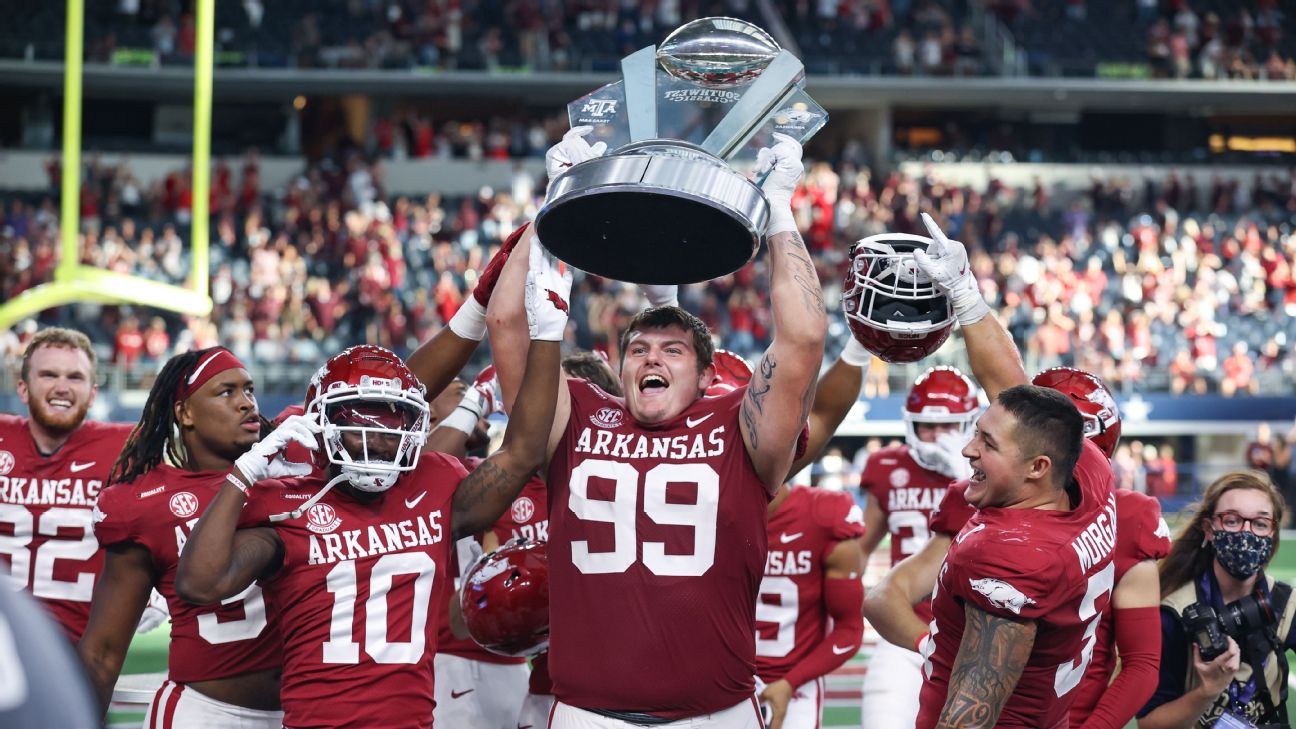 When the clock ran out in the Arkansas-Texas A&M college football game on Sept. 25, Rachael Harris hit the send tweet button and watched the likes roll in.


This instance was one example of the innovative exhibition that is social media trolling in college football these days. The practice has become fine art crafted by athletic department creative teams and has been on the rise this season.

It's not just about posting a picture of the score or stats, or trying to craft a finely worded recap of the game anymore. Those are boring.

Creative teams have found a way to engage with the fans in an entertaining and unique way that has brought more eyeballs to their accounts and thus programs than ever before.

Harris is the director of digital strategy for Arkansas and runs the football social media accounts. Her team of six people whipped up a graphic showing Texas A&M's mascot, Reveille, lying on the turf, staring off in the distance with a hint of melancholy in her eye with the final score of the game plastered below.


That tweet was one of 10 fired off from the Arkansas football account trolling the Aggies after the Razorbacks' win. One included a photoshopped remake of an ESPN commercial with Texas A&M head coach Jimbo Fisher trying to change the radio station in a car playing the Arkansas fight song with Sam Pittman sitting next to him.


Another showed a photoshopped picture of Fisher on the ground in an old "Lassie" episode, implying Lassie was Reveille and that Fisher needed help against the Razorbacks.


For Harris and her team, it was first about dipping their toes in the water to figure out where the line was and how far was too far with new coach Sam Pittman. The accounts have to reflect the coach and athletic department, but not every coach is on board with causing a scene or poking fun at an opponent.

"There was a point in quarantine a year ago that 'Tiger King' was a thing and we posted a graphic of [Pittman] as Tiger King," Harris said. "I think we said Hog King, and [Pittman] was just like, 'Well, that's weird, but OK.' And once we posted that, we were all like, 'OK, we're good, we can post whatever we want.'"

That test has turned into an onslaught of hilarious posts from the Arkansas Twitter account, including a Thomas the Tank Engine edit after Arkansas beat Ole Miss in 2020. It featured Thomas with a bandanna wrapped around his face with Eli Manning's number on the front so people knew it was supposed to be Lane Kiffin, who had been referred to as the "Lane train."

The video showed Thomas going off a broken bridge and falling into a ditch. It got its point across quite clearly.

The trolling has only grown in strength and popularity this season, and it hasn't just been Arkansas that has gotten in on the fun.

Kentucky posted an edited video of a man trapping an alligator in a trash can after it beat Florida this season and added a chef's kiss by cropping the Kentucky mascot's head over the man's head in the video.

Maryland went straightforward against Howard, simply stating the Terps had 21 points and Howard did not.

Fresno State doesn't call what it does trolling; it calls it having sass. Andrew Worth and Savannah Stoeckle are in charge of the sass, and similar to Arkansas, they want to make sure their message fits with what their head coach wants.

They have a more traditional athletic director and coach who prefer not to be disrespectful to the opponent. They wanted to respect those wishes, which is why after Fresno State beat UCLA, they did not post a picture with "ucLa."

That would have been disrespectful and targeted directly at the opponent, so instead they went with a more creative post depicting the Hollywood sign in the background with only an uppercase L, and a caption that read, "See ya next time, Loss Angeles."

An important aspect of this pure art form is knowing the circumstance and understanding when to really go in on another team's loss. That was the case for Fresno State and this particular post, as the game went back and forth and ended up being a compelling contest that warranted a snarky, or sassy in their case, ending.

"Another piece of it was just our fans really react to the sass," Worth said. "When you see our Twitter, Instagram or whatever it is, there's a little bit of attitude behind the tweet. Whether it's snarky, fun, whatever it might be, we have turned the page into that, and our fans absolutely love it."

They love it so much that this particular tweet has become Fresno State's most interacted tweet in the history of its sports accounts. As of Sept. 28, the tweet had 3,879,867 impressions, 230,341 engagements and a 5.9% engagement rate, which is considered very high.

"It's a fan base that tried to storm the field at the Rose Bowl after the game," Worth said. "That sums it up. That's probably the best way to put it, is that there were a half dozen people that got taken down in the end zone."

The fans also loved it because their team won. That's one of the key aspects to all of this -- on social media, and life in general, you can't talk trash if you're losing.

"It's easy to run a social media account when your team is winning," Harris said. "Running the men's basketball account during March Madness, I always tell people, we could have posted a blurry picture of [Arkansas basketball coach Eric Musselman's] elbow and it probably would've gotten 5,000 retweets for no reason. It's easy at that point, but what's critical and what can't get lost in it is the amount of preparation that we put into each week to ensure that when the team wins, we're ready to fire on all cylinders."

There probably wasn't a better example of the digital team firing on all cylinders than the Texas game. Arkansas beat the Longhorns 40-21 on Sept. 11, and went all-in on social media after the game.

Arkansas used a popular meme featuring Jonathan Frakes repeatedly telling you "Not this time" from his 1990s television show "Beyond Belief: Fact or Fiction" dubbed-over voices telling us Texas is back.


They dug in and tweeted again, welcoming Texas to the league by making fun of the fact that Texas will soon join the SEC. This was their welcome gift.

Harris acknowledged that these posts probably came pretty close to what they would consider going over the line and attacking a school instead of the outcome. But it was funny, so they went with it.

Can you blame them?

"We definitely don't try to get to a point where it's like, someone sees it and says, 'Wow, that was mean,'" Harris said. "There is a line, and we've always tried to approach it with the thought that we're having fun, this is not serious, this is social media. We're talking about a football game, so let's have fun with it."

Sometimes a fan base can take posts too personally and get upset. That doesn't sound like the rational, willing-to-listen reasoning for college football fans -- but it does happen.

If a post gets close to the line, like when Arkansas posted "All hogs, no cattle," with the Texas logo upside-down and the caption, "Well done," that can trigger some reactions.

"Every post gets a little bit of something [from opposing fans]," Worth said. "That's just the keyboard warriors who can respond without anything going wrong. If we were in person, I doubt anybody would say anything, but we also probably wouldn't say anything in person, either."

There was an instance this season when a tweet was perceived as crossing the line when the SMU football account tweeted an edited version of TCU coach Gary Patterson's original song, "Take a Step Back."

SMU beat TCU 42-34, and Patterson was not happy about the tweet, which had the caption, "THEY TOOK A STEP BACK."

"They hate you 'cause they take a song that you wrote about COVID and getting back to families and they make fun of you," Patterson said after the game. "If I had the time, I'd go out and get all the copyright laws and I'd get after their ass, but I've got Longhorns on my mind right now. Not them. I'm glad they keep substantiating our existence of where we're at and how we do things."

This season, more than ever, the sass has been prominent from the social accounts of athletic programs. Whether that's from pent-up emotion from last year or just the evolution of social media and how we all interact, it has been a lot of fun to watch it evolve.

With the engagement numbers proving that snark and memes are what the people want, there's no end in sight for a new wave of trash talking coming in the form of edited videos and photoshopped creative pieces of sassy art.

As Frank Pucher, senior associate athletic director at Fresno State, said, it's a microcosm of the power of social media and the ability to reach millions of people all with a weird video of a man stuffing an alligator in a trash can or an edited Lassie clip.

"It has changed so much in the last 10 years and how you engage with people and how you communicate," Pucher said. "It's a good reminder that this platform, social media, is incredibly powerful if done well. And if you capture those moments and do it the right way, it's an incredibly powerful vehicle that we've poured a ton of resources into, because we understand how powerful it can be." 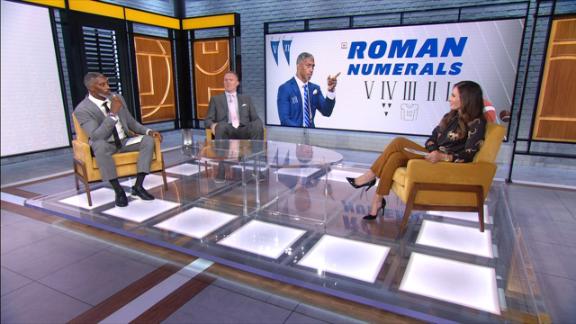