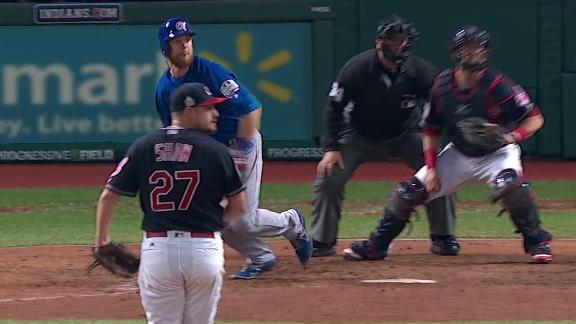 CLEVELAND -- This is why Ben Zobrist came home. And this is whyChicago Cubsmanager Joe Maddon wanted him so badly.

The Cubs needed a veteran in the clubhouse to teach their seemingly endless supply of budding stars, someone who'd been there. Who'd done that. Who cared little about curses or droughts. Who knew what Maddon wanted and how to translate it.

Zobrist, fresh off a World Series title with the Kansas City Royals, was searching for a place to spend the final years of his consistently fine career. He grew up in central Illinois, just two hours away from Wrigley Field, so playing for the Cubs seemed like a viable option.

And there he was, early Thursday morning, standing in the batter's box in the top of the 10th inning in Game 7 of the World Series and facing a two-strike count with the potential go-ahead run on second base. Then the 35-year-old switch-hitter did something that might have encapsulated everything Maddon loves about him.

Zobrist shortened his swing. He fouled off one pitch to stay alive. His next swing provided the final blow in Chicago's seasonlong bout with the weight of history: He hit a double inside third base that scored pinch runner Albert Almora Jr.with the decisive run in an 8-7 victory that gave the Cubs their first World Series championship since 1908.

Cleveland reliever Bryan Shaw intentionally walked Chicago slugger Anthony Rizzo to face Zobrist, who entered the game hitting .391 in the Series but had gone hitless in his past four at-bats. Shaw quickly got ahead 1-2, before Zobrist poked a foul ball down the third-base line past a diving Jose Ramirez. The next pitch was more of the same. In a situation where some of his teammates would have swung for the outer reaches of Progressive Field, Zobrist settled for making contact.

The normally understated Zobrist pointed toward the sky after his 10th and final hit of the Series. In response, the blue-clad Cubs fans in attendance roared once more.

"I know he threw a pretty hard cutter," Zobrist said of Shaw. "I just barely hung in there, and fortunately, he put one just close enough to the plate where I could slap it down the line."

When Zobrist returned to the dugout to fetch his glove and run back out to his spot in left field, the Cubs' lead was two runs. Barely 10 minutes later, Zobrist sprinted to join the dogpile in the infield, after Kris Bryant threw to Rizzo at first for the final out.

Last fall, Zobrist helped the Royals beat the New York Mets in five World Series games. When he went looking for a job, there was really only one place to go: Chicago.

When Zobrist signed a four-year, $56 million deal in December, Cubs president of baseball operations Theo Epstein said, "Ben is a winning baseball player. His offense, his defense, his baserunning -- he's been one of the more valuable players in the game for a long time."

Zobrist came to Wrigley Field without an ego. He played primarily at second base but also spent time in left field and right field. Always without complaint. Always with the greater goal in mind.

A goal that was realized after Cleveland's Rajai Davis tied the score with a stunning, two-run homer off Chicago closer Aroldis Chapman in the eighth inning. After the ninth inning ended, there was a 17-minute rain delay. And then the Indians dared Zobrist to be the difference.

He came through once more.