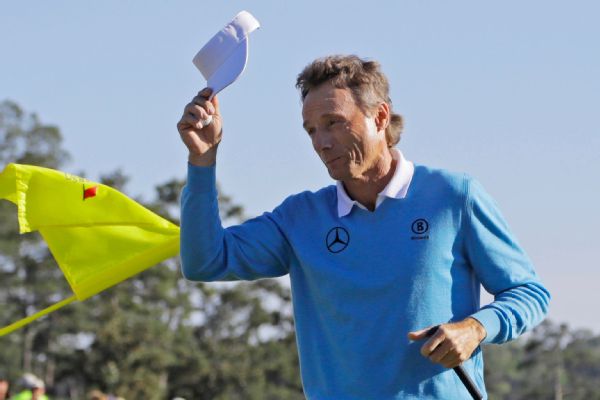 On Wednesday, the New York Times reported that President Trump, to substantiate his assertions that 3 million to 5 million people voted illegally in the 2016 elections, relayed a story that he said Langer told him. According to the Times, President Trump said Langer waited in line in Florida on Election Day before being told by an official he was not allowed to vote.

Trump went on to say that Langer stood next to people who did not look like they should be allowed to vote but who were able to cast provisional ballots, the Times reported, citing three staff members who were in the room for the meeting.

The Times story was picked up widely in social media, and Langer, a two-time Masters winner who now plays on the PGA Tour Champions, was trending on Twitter on Wednesday night.

Langer, a German citizen who cannot vote in the United States, said Thursday that "the report in the New York Times and other news outlets was a mischaracterization by the media."

In his statement Thursday, Langer said "The voting situation reported was not conveyed from me to President Trump, but rather was told to me by a friend. I then relayed the story in conversation with another friend, who shared it with a person with ties to the White House. From there, this was misconstrued."

White House officials told the Times that the president made it clear that the story about one of Mr. Langer's friends and was relayed to the golfer, who then passed it along.

"It's a privilege to live in the United States, and I am blessed to call America my home," Langer's statement went on to say. "I will have no further comment at this time."

All 50 states and the District of Columbia have finalized their election results with no reports of widespread voter fraud. Leaders on both sides of the aisle in Congress have challenged the president to further substantiate the allegations, and he is expected to sign an executive action as soon as this week to order an investigation into voter fraud.