Best battles of Round 2 include Sidney Crosby vs. Nicklas Backstrom, Subban vs. Tarasenko 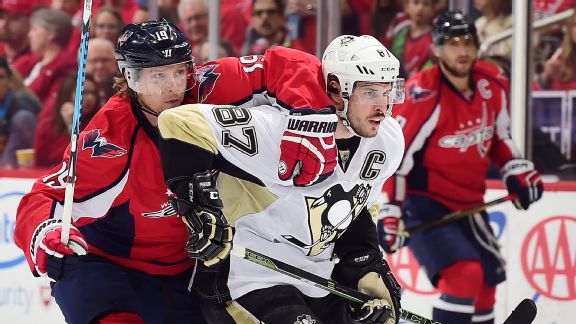 Perhaps you've heard that the Pittsburgh Penguins are playing the Washington Capitals in the second round of the Stanley Cup playoffs. It's Sidney Crosby vs. Alex Ovechkin. Sid vs. Ovi. Sid the Kid vs. Alexander the GR8. Are there other ways to put it? We'll certainly try!

Here's the thing, though: As much attention as the battle between those two superstars has received through the years, it's time to retire it. It was a good run.

The reason is simple: Another skater on the Capitals roster has eclipsed Ovechkin as Washington's top player.

So, as we break down the best battles we're going to see in Round 2 of the Stanley Cup playoffs, we absolutely have to start there.

The winner of the Capitals-Penguins series may hinge on which star center has the better production.

Backstrom has historically held his own against the best player in the world. The blog JapersRink.com broke down the even-strength ice time Backstrom and Crosby shared together from 2007-08 through 2015-16.

If Capitals coach Barry Trotz goes strength vs. strength in his matchups, Backstrom has proven he can hold his own against Crosby.

"He's so good on the puck," Ferraro said of Backstrom. "That's one of the reasons he's so good against Crosby. He can possess the puck and hold it away from Sid. [Crosby] is burning energy trying to get the puck back. That's a super intriguing matchup."

It's the best one-on-one battle of the second round, but here are a few others we can't wait to see:

There might not be two players more capable of changing the entire outcome of a game or series in one electrifying moment than these two.

Last spring, ice time was a bit of an issue between Tarasenko and former Blues coach Ken Hitchcock, but that hasn't been the case this year. Current coach Mike Yeo has given Tarasenko plenty of ice time, more than 20 minutes per game this season, and the Minnesota Wild did a nice job containing him. He was held to one goal, in part because the Blues controlled just 47 percent of the shot attempts when Tarasenko was on the ice at even strength.

The Blues are slow up the middle, so Subban and the strong-skating Predators defense will look to keep Tarasenko on his heels again in Round 2.

Granted, part of the appeal of this matchup is that these two were traded for each other in a deal last July that few anticipated would end up having a playoff impact nine months later.

They were dealt for one another -- and now they'll share ice time head-to-head in this series.

"For sure they will," Ferraro said. "Zibanejad was no good at the start of the [first-round] series [vs. theMontreal Canadiens] and was better late. Brassard had eight points."

Brassard has always been a strong playoff performer, with 20 goals and 52 points in 65 career playoff games.

The matchup between Ryan Kesler and Connor McDavid is going to be great. It will be a fantastic test of McDavid's strength and resolve at this point in his career.

But in the spirit of not making this all about centers, watching Lucic and Bieksa, two old warriors, try to impose their physical will on each other is equally enticing. In fact, it's already making us a little nostalgic for the great 2011 Stanley Cup finals that featured Lucic's Bruins vs. Bieksa's Canucks.

The Ducks will have decisions to make on defense, in terms of playing time, now thatCam Fowler and Sami Vatanen are healthy. But Bieksa put up four points in Round 1, making a case to stay on the ice.

As for Lucic, this is where his signing last offseason pays off. Oilers GM Peter Chiarelli brought him in precisely for a series like this.