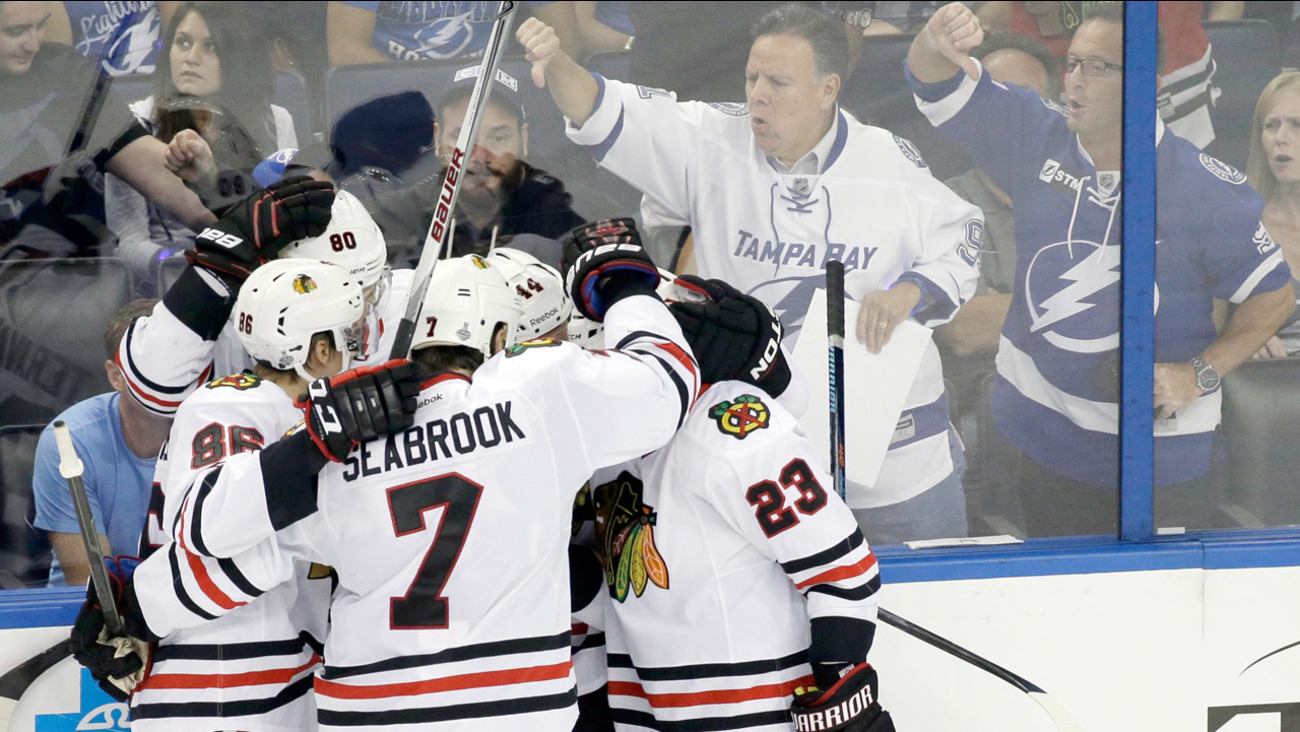 TAMPA, Fla. -- With another tenacious road victory in this agonizingly close Stanley Cup Final, the Chicago Blackhawks earned an opportunity to raise that silver trophy on their home ice.

Antoine Vermette scored the tiebreaking goal early in the third period, and the Blackhawks moved to the brink of their third NHL championship in six years with a 2-1 victory over the Tampa Bay Lightning in Game 5 on Saturday night.

Corey Crawford made 31 saves and Patrick Sharp scored an early goal into an accidentally unguarded net for the Blackhawks, who took a 3-2 series lead by surviving another tense game in this incredibly even series. The first five games all have been decided by one goal for just the second time in Stanley Cup Final history, and the first time since 1951.

Ben Bishop stopped 27 shots after missing Game 4 with an undisclosed injury, but the goalie's ill-advised venture outside the crease led to Sharp's goal.

Valtteri Filppula scored for the Lightning, who have scored just two goals while losing two straight games for only the second time in their 25-game postseason. Tampa Bay also lost second-leading scorer Nikita Kucherov to a first-period injury when he crashed into the Chicago net.

Game 6 is Monday night in Chicago, and seven remaining members of the Blackhawks' two-time champion core will have the chance to skate the Stanley Cup around the United Center for the first time after winning the other two Cups on the road. The Lightning must win two straight to claim the second Stanley Cup title in franchise history.

Game 5 was another chapter in what's shaping up as the tightest Final ever played. Neither team has even held a two-goal lead through five games, staying tied or one goal apart for all 300 minutes.

The clubs started the third period in a tie for the third straight game, but Vermette cashed in on a loose puck in the slot just two minutes in.

Bishop kicked the puck straight onto Vermette's tape after stopping a rush by Kris Versteeg. Vermette, the veteran forward acquired from Arizona near the trade deadline, also scored the third-period tiebreaker at Amelie Arena in the series opener 10 days ago.

While the Lightning didn't know their goalie's identity until earlier in the day, Crawford delivered another outstanding night in Chicago's crease right when he was most needed. He capped the performance with 16 saves in the third period, performing flawlessly down the stretch just as he did in the previous game.

Bishop decided to play after participating in the morning skate, and the 53-game winner appeared to be moving more fluidly than he did in Game 3. He still gave a goal to the Blackhawks in the first period with an ill-advised venture out of his crease

Bishop roamed almost halfway to the blue line to play a puck and collided with star defenseman Victor Hedman. Sharp ended his 13-game goal drought by skating around the pair and chipping in the open-net gift in front of Tampa Bay's stunned fans.

The Blackhawks had several other golden scoring chances before Filppula's goal, including Teuvo Teravainen missing the net on a clean breakaway. The Lightning evened it when Jason Garrison made a wicked cross-ice pass through Chicago's defense to the Finnish veteran, who ended his six-game goal drought.

The final Saturday night game of the NHL season got off to an ugly start for the Lightning when Kucherov then nearly scored on the play on which he was injured.

Crawford inexplicably passed the puck right at Kucherov, but the Russian forward charged at it and lost his feet when Crawford dived back to his crease. Kucherov hit the post hard with his shoulder or head, skating off hunched over and going straight to Tampa Bay's dressing room.