BPI vs. Bracketology: Which college basketball teams, leagues should we buy and sell?

Joe Lunardi tells us how it is in men's college basketball; the BPI Bracket Predictor tells us how it will be. We are about 50 days away from Selection Sunday, and a lot can change between now and then.

Let us take a dive into Lunardi's latest bracket and look at which teams and conferences will trend up or down between now and March 15.

One advantage of simulating out the season is that instead of assuming the conference tournaments do not result in stolen bids, we can account for likely stolen bids and how big the bubble will or will not be in a given season. Some mid-major conferences might appear thin now but will likely be in a better position come March.

Lunardi pegs the A-10 as a two-bid league, with Dayton as a No. 2 seed, VCU in the Last Four In and Richmond lurking in the Next Four Out. Richmond welcomes No. 7 Dayton to the Robins Center on Saturday, a game BPI gives Richmond a 36% chance to win. While certainly not a must-win game, should the Spiders pull off the upset at home, BPI Bracket Predictor gives the team an 87% chance to make the tournament.

VCU, on the other hand, is squarely on the bubble and is likely to stay there the rest of the season. The BPI favorite is a remarkable 18-1 in VCU games this season, and BPI projects the Rams to finish 8-4; their NCAA tournament fate will likely come down to the A-10 tournament. BPI currently would favor VCU against any A-10 team other than Dayton on a neutral court. If the Rams win one game in the A-10 tournament, they would have an 80% chance to go dancing.

BPI prediction: 75% chance the A-10 gets three or more teams into the tournament.

San Diego State is a No. 1 seed in the latest Bracketology, and the next Mountain West team is ... in the NIT? The good news for the Mountain West is that despite recent struggles, Utah State is still the second-best team in the conference. Aggies standouts Sam Merrill and Justin Bean are both in the top 35 in the nation in adjusted win shares; Duke, Maryland and Minnesota are the only other teams with two players in the top 35 in that category. BPI favors Utah State in each of its remaining games except when it travels to San Diego State.

Since we noted several advanced metrics' fondness for Duke last week, the Blue Devils lost to Louisville at home, trailing nearly the entire game. Duke followed that up by taking care of Miami. While Lunardi dropped the Blue Devils to a No. 2 seed, BPI's love for them remains unshaken. The race for a 1-seed is wide open this season, with 11 teams having a greater than 10% chance to get a No. 1 seed, per the BPI Bracket Predictor. The most likely of those 11? Duke.

The Pac-12 is having a resurgent season, finally back to major-conference status in the eyes of BPI. The latest Bracketology sends five Pac-12 teams to the NCAA tournament, the same number as the ACC. The BPI Bracket Predictor is not buying it.

Arizona, Colorado and Oregon are all 90% or better to reach the tournament. Getting five teams into the tournament for the Pac-12 will come down to the performance of USC and Stanford down the stretch.

Stanford is 38th in strength of record (SOR), a sign it currently deserves to be in the tournament. The problem is that the Cardinal have yet to play any of the top three teams from the Pac-12 and have five remaining against that contingent on the schedule, plus a likely loss in the Pac-12 tournament. Despite only three losses so far, BPI sees Stanford's final résumé with nine or 10 losses.

USC has the same record as Stanford against a harder schedule and just beat the Cardinal head to head, yet BPI gives the Trojans a slightly smaller chance of making the tournament. The reason? Stanford has a slightly easier scheduler remaining; i.e., nine or 10 losses is likely for USC as well.

In the Pac-12 tournament, the difference between a No. 4 seed and a No. 5 seed is an extra round. If Stanford edges out USC in seeding, it will be better rested entering a potential de facto NCAA tournament play-in game between the two schools.

Although Lunardi has the Sooners in the Last Four Byes category, Oklahoma fans shouldn't expect the team to stay in the field. With the No. 39 SOR, Oklahoma certainly deserves to be in the current bracket, but things likely won't stay that way. The Big 12 schedule has no "gimme" games, and the Sooners are BPI underdogs in nine of their final 13 games. Add it all up and Oklahoma has a projected conference record of 8-10. That mark means the Sooners will likely be on the wrong side of the committee's magical ".500 in conference" criteria in at-large selections. 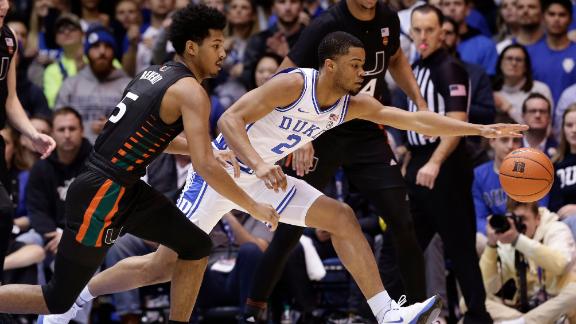