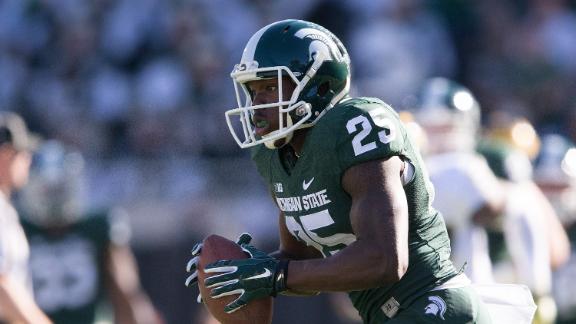 Michigan coach Brady Hoke has issued an apology to Michigan State for his players planting a stake in the Spartan Stadium turf before Saturday's 35-11 loss.

In a statement released by the school, Hoke said he spoke with Michigan State coach Mark Dantonio on Sunday morning to apologize for the display, calling it "poor sportsmanship."

Hoke said that during the Wolverines' Friday night meeting, the team was presented with a tent stake as part of a motivational speech about staying committed and together in a tough environment.

"The stake was brought into our locker room as a visual reminder," Hoke said, "and one of our team leaders chose to take it out on the field. As the leader of our football program, I take full responsibility for the actions of our team. We believe in displaying a high level of respect at the University of Michigan and unfortunately that was not reflected by this action prior to kickoff."

Michigan State noticed and took umbrage at the stake-planting. Rather than take a knee with a 17-point lead in the final minute, the Spartans tacked on another touchdown on a Jeremy Langford run.

"It just felt like we needed to put a stake in them at that point," Dantonio said in his postgame news conference.

The Spartans have often felt disrespected in this in-state rivalry, especially since then-Michigan tailback Mike Hart referred to them as "Little Brother" after a 2007 Wolverines win. Since then, Michigan State has won six of the past seven meetings.

"I can only be diplomatic for so long," Dantonio said Saturday evening. "The little brother stuff, all the disrespect, it didn't have to go in that direction.

"We try to handle ourselves with composure. That doesn't come from a coach. It comes from the program. Throwing the stake down in our backyard out here and coming out there like they're all that. That got shoved up ... It got shoved in the last minute and a half."

Hoke said Saturday that he wasn't sure exactly what happened with the stake-planting incident. In his Sunday statement, he said he told Dantonio that "we meant no disrespect to his team."