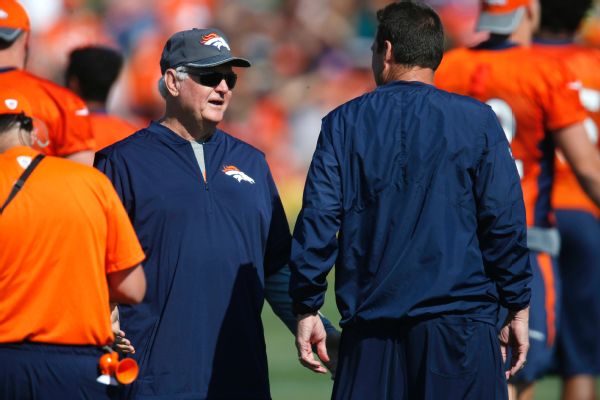 DENVER -- Denver Broncos defensive coordinator Wade Phillips was released from a Denver-area hospital Sunday night after being taken from the sideline on a backboard during the Broncos' 27-19 win over the San Diego Chargers.

Phillips was knocked to the ground during Broncos cornerback Bradley Roby's interception return for a touchdown in the second quarter. Phillips was strapped to a backboard following the play as a precaution and taken to a local hospital.

Phillips was responsive and alert following the play. After some tests at the hospital -- Phillips watched the end of the game on television -- Phillips was discharged early Sunday evening. Broncos coach Gary Kubiak said reports that Phillips had suffered a leg injury or a fractured leg were incorrect.

"Everything I've heard is he's great,'' Kubiak said. "He's fine, he's upbeat, he watched the end of the game. We've been in contact with Lori, his wife. He talked to me before he left the field.''

Linebackers coach Reggie Herring took over play-calling duties for the remainder of the game as the Broncos finished with four sacks and intercepted Chargers quarterback Philip Rivers three times.

Kubiak presented Herring with a gameball following the game.

"Reggie took over, Reggie's done that before when I was in Houston and I lost Wade for a couple games, and Reggie called a couple games, Reggie's done that,'' Kubiak said. " ... When it happened I got on the headset a couple times and he told me 'shut the hell up, get the hell off the headset, I got it.' Reggie's a fine coach, he's been a teacher for made many years and he really stepped up and did a fine job.''

Roby intercepted a tipped pass with just over nine minutes remaining in the second quarter of Sunday's game against the Chargers. As he ran up the Broncos sideline during the return, Chargers running back Melvin Gordon was blocked into Phillips, who was standing several feet back from the sideline.

Phillips, 69, fell to the ground, and video showed that the back of his head struck the ground. Players quickly waved Denver's training staff over to help Phillips.

Phillips was secured to a backboard, with his head immobilized, and taken off the field on a cart. Broncos coach Gary Kubiak talked to Phillips as he as was about to be taken from the field, and Phillips appeared to answer Kubiak.

Phillips also waved the No. 1 sign with his right index finger as the cart was driven away.

Wade Phillips hit and carted off in scary moment
During a play on the field, Melvin Gordon collides with Broncos defensive coordinator Wade Phillips on the sideline. Phillips stays down and is then carted off to the hospital.