Cab driver praises John Elway, then learns he has him in his car 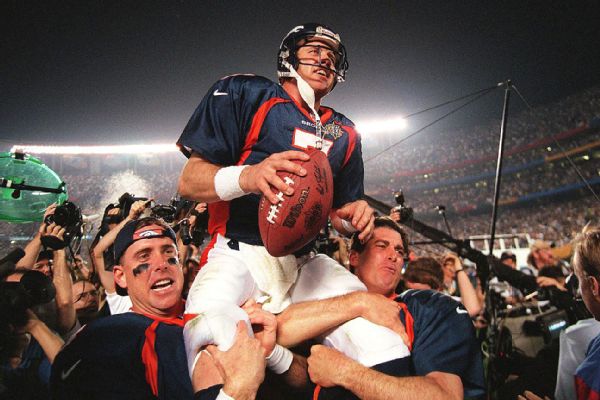 WASHINGTON -- You're just driving your cab around, getting folks from one place to another, trying to make a living.

A group piles into your cab and one of the passengers, seemingly just to make conversation to pass some time, asks who your favorite quarterback is. You're in Washington, as driver Sam Snow is, so you of course pick ... John Elway. And what do you know -- that's who you picked up.

That encounter happened Friday while Elway was in the capital for the presidential inauguration. A Facebook video posted by Glenn Stearns, a friend of Elway's, shows cab driver Snow praising Elway, even though he's a Steelers fan.

Snow, facing forward with his eyes on the road, goes through why Elway was the best and should be No. 1 on the list. He then goes on to talk about New England Patriots quarterback Tom Brady and Pittsburgh Steelers quarterback Ben Roethlisberger. After a couple of moments, one the passengers, who has captured the whole thing on a cellphone video, asks Snow whether he would know Elway if he saw him, then points out that Elway is in the backseat on the passenger side.

Snow later asked to take a picture and chided the Broncos legend for beating his beloved Steelers in the playoffs several times.

The video isn't the only social media post by Stearns featuring Elway that has drawn attention. Stearns also posted a picture of Elway posing in a picture with Dallas Cowboys quarterback Tony Romo, fueling the NFL rumor mill.

The Denver Post'sNicki Jhabvala was one of several reporters to tweet the picture, courtesy of Stearns.

Romo, who was injured and lost his starting job with the Cowboys to Dak Prescott last season, might become available this offseason. Trevor Siemian was the Broncos' starting quarterback last season with first-round pick Paxton Lynch as his backup, but Denver's offense finished 22nd in scoring. Four of its 35 touchdowns came courtesy of defensive scores.