Can Spurs find their groove again? 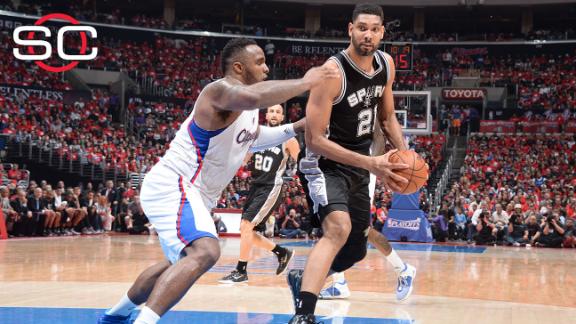 LOS ANGELES -- The Spurs have five days in L.A. for the opening games of their first-round series against the Clippers, and it would have been more convenient to stay in one hotel the whole time. But Gregg Popovich knows a thing or two about preparation, and three nights of perfect Santa Monica beach sunsets are nothing to take lightly. That's why the Spurs switched to a hotel downtown only yesterday, before Wednesday night's Game 2.


"Spurs culture" really does include some culture. Good food, better wine and hotels by the beach whenever possible. The organization values intensity at the right times -- Pop's gruffer moments, Kawhi Leonard's feisty defense, instantaneous decision making with the ball -- but there's a laid-back counterbalance. As hard as the team goes in the playoffs -- chasing younger players around screens, shrugging off injuries -- this is also the team that most famously embraces taking it easy at other times, even sitting healthy players for whole games earlier in the season. Pop is not a man who loses sleep over a November loss in Sacramento.


Valuing down time earlier in the season helps Popovich "deliver the team to April," as former Spurs assistant coach and current Philadelphia head coach Brett Brown, once said. The idea is to get to the playoffs healthy, focused and ready to perform when it matters most.


And the whole team knows when it's time to step it up a notch: when the annual San Antonio Stock Show & Rodeo displaces the Spurs from the AT&T Center for most of February.


"Pop doesn't even have to say anything," Spurs assistant Ime Udoka says. "We don't have to talk about it. We all just know it's time."


"The road trip comes at the same time for us every year. It does give us a consistency," general manager R.C. Buford says. "When you have older guys who have been through this before, they recognize what the preparation needs to be."


Painful as all that time on the road may be, it's something the Spurs have come to count on.

"It's two weeks on the road and it always seems longer," said Mike Brown, another former San Antonio assistant. "But Pop reframed it and turned it into a positive. He made it the time that we really tried to get guys to lock in and focus."


San Antonio is 76-33 all time during these Rodeo road trips, which they started taking in 2003. But this season, for the first time, the Spurs couldn't quite crank up the machine on schedule, and posted their first losing record, dropping five of the nine games.


To some it seemed symbolic. A sign of age and decline. Finally, after all these years of sustained success, the mighty Spurs were losing a step.


To others, it seemed random. A byproduct of injuries and timing more than anything else. A meaningless coincidence more than the beginning of the end.


And there were plenty of injuries. Leonard's hampered right hand ligament kept him out of the lineup for a month starting in mid-December. Tony Parker barely played in December as his right hamstring dogged him, then the left. Now his ankle and Achilles are the concerns. Tiago Splitter's right calf has been mentioned on injury reports all season, and is the reason poor Aron Baynes is the guy trying to stay in front of Blake Griffin and out of the highlights. Marco Belinelli's right groin has kept him from being 100 percent much of the season, and one of last year's playoff heroes, Patty Mills, didn't play his first game until after Christmas.


All was forgotten, though, when the team finished the season winning 21 of 25 games.


It's normal for an older team to take a little longer than usual to get going. That's how the aging process is for all of us. What used to take 10 minutes to shake loose now takes 20. What used to bend now breaks. Creakiness is a state of being. But eventually the Spurs get where they need to be. Count on Duncan and Parker and sunsets on the beach and dinner at Beverly Hills Italian bistros such as E Baldi, where they ate as a team on Saturday.


So many epitaphs have been written on the Spurs over the last few years, it feels silly to start penning another just because they took a little while to get going in this playoff series, dropping Sunday's opener 107-92 to the younger, more athletic Clippers.


Yes, this season has been a tough one, with injuries and age taking a steeper toll than in seasons past.


Game 1 felt like a microcosm of the season, as Parker went down early in the first half with an ankle injury, then again in the third quarter when he took a painful knee to the thigh.


"For me personally, it was definitely a season with ups and downs and a lot of different injuries, and to start [this playoff series] with twisting my ankle, I was like, 'Come on,'" Parker said. "I couldn't believe it.


"But, hey, it's like that. We've been in a lot of different situations since I've been with the Spurs, and we just have to stay together and keep pushing and try to come back. Just another great challenge for us."


The Spurs have repaid the faith so many times over the years, there's almost no choice but to keep extending it to them. Just when you think this is finally the year they fall apart, they reconstitute in time for the playoffs and make another deep run.


One of these years, it won't happen. The Spurs' dynasty really will end.


You wonder whether anyone will see it coming. If it'll be obvious, or just a slow decline.


In the meantime, Popovich will take in as many sunsets at the beach as he can get. There are certain things in life you shouldn't take for granted.


"I don't have a formula," Popovich said. "At the end it's not exactly pushing a button. The focus just seems to come at the right time for them. I think it's mostly their character. I don't do certain drills to make it happen or something. It's the people."