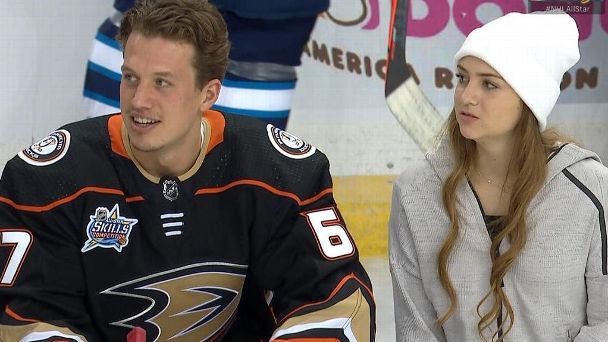 TAMPA -- In a restaurant nestled in the lobby of the Hyatt Hotel, Rickard Rakell sits down for lunch with his guest, Katie Hawley. He's theAnaheim Ducks'All-Star, a 24-year-old Swedish center who leads his team with 36 points this season. She's a 17-year-old California girl who loves shopping sprees and the beach. He made his NHL debut at 19 and has yet to finish his high school degree; she's taking time off from AP classes and writing college scholarship essays to be in Tampa.

But as Rakell picks at braised short ribs and Hawley munches on a burger, any perceived difference between them melts away. They realize that they're both close to their mothers; Rakell FaceTimes his mom, Annika, who's back in Sweden, every night. Not only do both Rickard and Katie like sitcoms, especially Modern Family, but they also both watch them with subtitles. That's the way Rakell became accustomed to watching American TV shows growing up in Sweden. Hawley does so because her hearing isn't so great these days.

Over the next hour, conversation comes easily for the two, as Rakell does everything he can to make Hawley smile. When she laments that she's "never been a typical high school girl," Rakell deadpans: "Don't worry. Neither have I."

Hawley has been battling cancer since she was 9. Doctors found ganglioneuroblastoma in her body the summer before she was to start fourth grade, and she immediately began treatment. She has since had at least a dozen surgeries, two dozen chemotherapy sessions, 30 radiation treatments, 80 scans and 40 blood transfusions. In two weeks, she will undergo yet another procedure, this one to remove a cancerous thyroid.

Anaheim honored Hawley as its "21st Duck" earlier this season, which included skating onto the ice for player introductions on opening night. When the Ducks found out Hawley had been diagnosed with another setback -- the thyroid -- right before Christmas, they wanted to do something else. They surprised her and her family with a trip to All-Star weekend to spend time with her favorite player.

"I was starting to feel not great again," Hawley said. "I got into college, but I didn't get any scholarships, and it made me feel like people didn't care that much about cancer survivors, that everything I went through didn't matter. But everything I got to do this weekend, spending time with Ricky, really feeling like we became friends, I realize I don't need anybody else. I have the Ducks and the NHL as my family."

Katie Hawley, then 9, was playing in a soccer tournament when she complained about stomach pains. It's probably just nerves, her parents figured. She had just been promoted to a select team. But they took her to an urgent care center, where a nurse practitioner exercised extra alarm. She suggested Hawley undergo a CT scan immediately. Hawley's father, Bob, rolled his eyes. Isn't this a little much? he thought. But he and Katie's mother, Mary Kay, obliged, and it unfortunately turned out to be something much, much worse than they thought.

Treatments began right away. "We got off the fourth floor [at the hospital]," Mary Kay recalled. "And we saw these bald children slumped over. It was so surreal. Katie still had her hair down to her waist. She was a happy, active girl." Soon, she shaved her head. She was homeschooled for an entire year. After 10 months of aggressive, in-home chemotherapy -- which often made Hawley feel sick and depressed -- she went into remission.

"We tried to resume a normal life," Bob said. "That lasted about three years."

Aches and pains from soccer sent them back to the doctor. Another CT scan revealed that the cancer had returned. Instead of being contained to Katie's soft tissue, it was now in her bones. She had a spot right below where her spine connects to her skull.

"This time was much worse," Mary Kay said. "Because we knew what to expect."

The Hawleys had neighbors and friends with Ducks season tickets, which they often donated to the family. Any time Katie had a bad day, her father would take her to a game. She quickly developed an affinity for Rakell. Ask her why he's her favorite, and she'll quip, "Have you seen how good-looking he is?"

"But the truth is, she liked him before she even saw him without a helmet," Mary Kay said. "She loved the way he skated and was scrappy, always fighting for the puck."

Added Bob: "It's reminiscent of the style she used to play in soccer, as a right wing."

Katie couldn't play soccer anymore. She was fighting for her life. She flew to New York 10 times for experimental treatment. The cancer was beating her down.

"I recalled having conversations with her, and she said, 'Dad, I'm done this time. I just want to go,'" Bob said. "We had a hard conversation to have. Who has the death conversation with their kid?"

He paused in this retelling, working through a lump in his throat. "Her willingness to fight was brought back by the Ducks."

The Ducks found out about Hawley's story in the summer of 2016 and relayed it to Rakell, her favorite player. Although he was in Sweden at the time, he recorded a video to send back. Sitting on a chair with his dog, Stella, on his lap, he said: "I heard you were going through a tough time, but I also heard you were quite the fighter. So I want you to continue to be strong and keep fighting."

When Rakell returned to California, he surprised Katie while she was volunteering with The Jessie Rees Foundation, an organization dedicated to helping children fight cancer. Then, on opening night of this season, she skated onto the ice at the Honda Center, flanked by Rakell and Corey Perry.

She asked both players to score for her. The Ducks fell behind theArizona Coyotes4-1 early in the second period, but stormed back behind a pair of goals from Perry before Rakell broke a 4-4 tie with the eventual game-winner late in regulation for a wild win. Hawley could barely say anything, she was crying so hard. "It was the most magical thing I've ever been a part of," she said.

"It's hard to imagine what she is going through," Rakell said. "I'm glad we could give her a special experience then and also this weekend."

In Tampa, the Ducks put Hawley to work -- and watched her personality shine. At media day, Anaheim appointed her as its junior correspondent. She had no problem approaching the game's biggest stars. She asked New York Rangers goalie Henrik Lundqvist if he watched "The Bachelor." (He didn't.). "You really should watch it," she asserted.

She askedPittsburgh Penguinscenter Sidney Crosby how he felt about wearing a pirate hat on the NHL Network set. Turns out, Crosby was once a pirate for Halloween. When she met 71-year-old NBC broadcaster Doc Emrick, a cancer survivor himself, Hawley told him he looked like he was 45. "Well, that's the secret to a good interview!" Emerick beamed. "Compliment the subject. You are very good." Hawley even weathered an awkward interview with former NHL goaltender Ilya Bryzgalov, which has become an All-Star rite of passage.

The Ducks sent Hawley in a limo. They scheduled a manicure for her when she got to town and pampered her with a stylist, who put in extensions and did her makeup before she walked the red carpet with Rakell. Spending time with Hawley, it's easy to forget what she is enduring. She has an infectious giggle and a precociousness about her. Inside, though, she is still hurting. After a long morning Saturday, she popped a few anti-nausea pills and felt the need to lie down. "Soon, I'll be better," she said with matter-of-fact confidence.

At Amalie Arena on Saturday night, she was introduced to New Jersey Devils forward Brian Boyle, who is battling chronic myeloid leukemia. "I'm a cancer fighter now," Hawley told him. "I've been fighting for the past eight years."

Boyle's eyes widened. "Eight years?" he said, shaking his head. "Yeah, I'm new to the club. It's been good and bad. It's scary for me, but now it's under good control."

"I feel great," Boyle told her. She smiled. He asked her about her story and how she was feeling. She told him about the procedure she would undergo in two weeks for the cancerous thyroid, that she was still getting treatments every three weeks and that side effects weren't that bad.