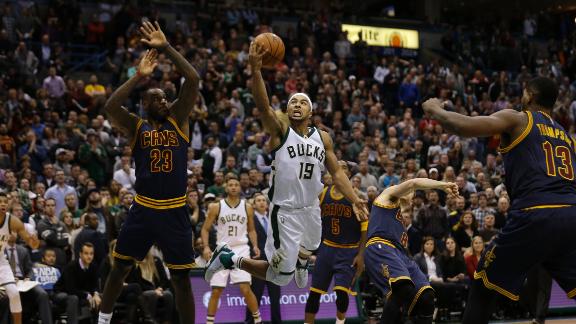 Chief official Marc Davis explained the error to a pool reporter after the game.

"I blew the whistle with 7.4 seconds because I was in my action refereeing the play, and off to the side I heard Cleveland's bench ask for a timeout," Davis said. "I granted them the timeout, at which I looked at the head coach David Blatt and realized that he hadn't asked for the timeout. [I] made an inadvertent whistle, which allowed the offensive team to call a timeout, and, in fact, they wanted a timeout and asked for a timeout."

According to the NBA rulebook, a timeout can be granted only to either the head coach or one of the players checked into the game when the ball is dead or in control of the team making the request.

A video replay showed at least five members of the Cavs -- Kevin Love, Mo Williams, assistant coaches Jim Boylan and Larry Drew, as well as athletic trainer Stephen Spiro -- all signaling for timeout from the bench after LeBron James blocked Jerryd Bayless' layup attempt with 9.9 seconds remaining in overtime and the score tied 96-96.

However, since Love and Williams were out of the game, they were ineligible to have their request granted, as were the staff members.

When play was stopped after the whistle, both James and J.R. Smith let their frustration be known, hopping in place after the call.

"Coach said if we get a stop, then go ahead and go, because they might expect us to call a timeout," James explained. "We got a stop, Delly [Matthew Dellavedova] got the board, outletted to me and I had a full steam, and we had an inadvertent whistle, so I'm guessing that they heard someone call timeout. But the rules, I know the rules, and only the head coach can call a timeout, and Coach Blatt didn't call a timeout, so, you know, it's over and done with now."

Smith described what he saw as he streaked up the left side of the court ahead of James.

"In that situation, 'Bron already said it: 'If we get the rebound, we're going to go.' So we went, 'OK,'" Smith said. "[Dellavedova] gets the rebound, we're about to make a break and then, all of the sudden, you just hear the whistle blow and thinking, 'OK, maybe we called timeout.' And then when it's just an inadvertent whistle, it's like, 'What? What happened? How did this even come about?'"

Milwaukee had three players immediately retreat back on defense after Dellavedova snared the board, but Bayless was lying on the floor after his shot was blocked so Cleveland theoretically could have had a 5-on-4 break opportunity if play had not been stopped.

"They [were] kind of relaxed, and I was headed up the left side of the floor with a head of steam," James said. "That's not why we lost the game, but it's something you wish you could have back."

Blatt said Davis did not give him an explanation for his actions, other than admitting the mistake.

No one in the Cavs' postgame locker room, Blatt included, mentioned the Cleveland contingent on the bench calling for timeout.

It is the second timeout controversy at the end of a game in the past two seasons for the Cavs. The first came in Game 4 of their Eastern Conference semifinal series against the Chicago Bulls when Blatt signaled for a timeout his team didn't have, but associate head coach Tyronn Lue pulled him back to the bench before a referee could notice his request.

Blatt detailed the instructions he gave his team should Milwaukee fail to score on its possession that started with 13.8 seconds remaining in the first overtime and just five seconds remaining on the shot clock.

"The plan was expecting they would probably relax a little bit; we had decided to push it and we didn't get that chance, unfortunately," Blatt said. "Look, we all make mistakes, but that's a bad mistake."

The ending marred a furious comeback by the Cavs, who trailed by 11 points with 6:33 remaining in the fourth quarter before forcing overtime. James scored 21 of his season-high 37 points after the third quarter in directing the last-ditch effort.

However, James pointed to mistakes made by Cleveland (8-2), and not ones by the referees, as the reason his team failed to match the 1976-77 Cavs' 9-1 record for the best 10-game start in franchise history.

"We gave ourselves a chance to win, but 20 turnovers for 26 points on the road are not ingredients for winning, so we dug ourselves a hole," James said. "We gave up 15 offensive rebounds, and actually, eight of those offensive rebounds came before the first timeout in the game, so we've got to do a better job on the road, for sure, taking care of the ball, including myself. I had seven of them, out of 20 of the turnovers. It's almost a one-to-one ratio as far as assists to turnovers, and that's not good for our team."

Saturday also marked the third straight game Cleveland found itself down by eight or more points in the fourth quarter and needing to rally late.

"We give a half-ass effort sometimes and expect that we can just make a run at the end," James said. "We're not good enough to do that right now."