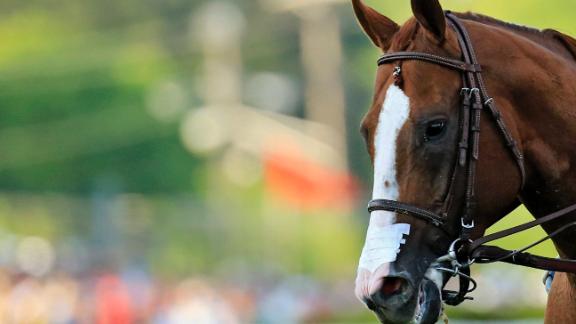 In what appears to be an initial step to cash in on what could potentially be the first Triple Crown winner in 36 years, the owners of California Chrome have filed to trademark the horse's name.

Records with the U.S. Patent and Trademark Office show that Steve Coburn and Perry Martin, and their wives, who make up the horse's ownership entity of Dumb Ass Partners, filed for the trademark Thursday, just two days before California Chrome won the Preakness, the second leg of the Triple Crown.

The owners hope to trademark the phrase on athletic apparel including "shirts, pants, jackets, footwear, hats and caps." The filing shows that California Chrome gear was first sold in April 2013.

When California Chrome takes to the track at the Belmont Stakes on June 7, the horse will be the 13th to go for the Triple Crown since Affirmed won all three legs in 1978.

Over the next couple of weeks, California Chrome's owners could set up contingency licensing deals that would allow companies to immediately start selling Triple Crown gear should he win.

No merchandising plan was more intricate than the deals set up for Big Brown, who won the Kentucky Derby and Preakness in 2008. Many apparel and collectible deals were structured ahead of the Belmont, though they were all undone when the horse not only didn't win, but didn't even finish the race after pulling up early.

After I'll Have Another's Triple Crown bid was halted when the horse was pulled the day before the Belmont in 2012, thousands of shirts at the racetrack with the horse's name on it became worthless.

California Chrome, which was bred for $10,500, has now won $3.45 million on the track. More than 97 percent of those winnings came with the horse wearing a nasal strip. On Monday, New York racing stewards approved the use of the strip for the Belmont.

Next Triple Crown Winner?
Hank Goldberg explains whether California Chrome has what it takes to win the first Triple Crown in 36 years.

No Slowing Down In Quest For Triple Crown
California Chrome's co-owner and trainer discuss the win at the Preakness Stakes and the road to Belmont.