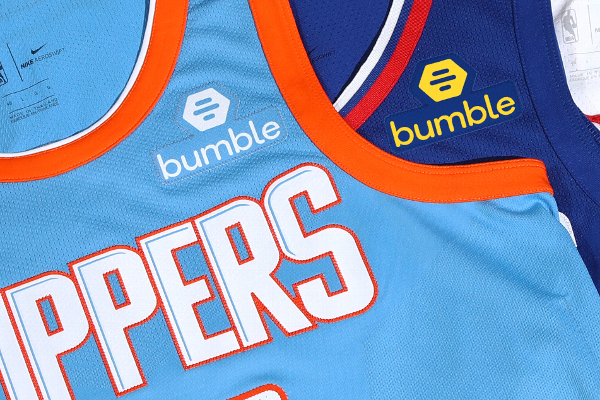 The LA Clippers will have a new look for Tuesday night's game against the New Orleans Pelicans.

The team signed a patch deal with dating app Bumble, which also has functionality for friendship and business conversations.Bumble also is known for allowing women to control the conversation in dating dialogue by requiring them to message first.

The Clippers are calling the Bumble logo on the uniform an "empowerment badge," pledging to invest in promoting gender equality.

"We wanted to do something where we could really stand out and do something meaningful," Clippers owner Steve Ballmer said. "The way it is positioned it becomes part of the game, so it's an opportunity to have more meaning for everybody."

"We've had tremendous respect for the team that Steve built," said Whitney Wolfe Herd, founder and CEO of Bumble. "The amount of women he has in leadership positions is not something you typically see in sports."

Ballmer said the partnership will be expanding programming toward furthering women in the workplace, including building a strong mentoring network.

"If all you are doing is selling ad space, that's not a bad thing," Ballmer said. "But if we are going a step further and building joint experiences with our sponsors that allow us to bring alive what we do and they do, you can't do better than that."

As an example, Ballmer used the promotion the team has with Chick fil-A, in which consecutive missed free throws by an opponent yield free chicken sandwiches for fans.

"We can sell signage to Chick fil-A in the arena, but if we do it the way we do it, it's much more impactful," Ballmer said. "We feel the same way about what we are going to do with Bumble."

The Clippers' deal with Bumble marks the 20th jersey patch alliance struck for this season, the first year of a three-year pilot program by the NBA.