ESPN
By ESPN Staff
We're already a full four weeks into the season. Seriously, where does the time go?

So far this Saturday, No. 12 Notre Dame has already taken care of business against No. 18 Wisconsin with a 41-13 win in Soldier Field in Chicago. The only other game between ranked opponents is No. 7 Texas A&M-No. 16 Arkansas, and they're competing in AT&T Stadium in Dallas. But we're monitoring everything else going on and there is no shortage of highlights and drama.


Check out all the results, reaction and revelry from throughout the land.

Arkansas has rolled to a 3-0 start, blowing out Texas and rising to its best poll standing in five years. The ceiling seems awfully high for Sam Pittman's Razorbacks, but life in the SEC West means the floor is always low, too. The reward for their newfound prowess: four consecutive games against teams ranked 18th or better in SP+ (and 23rd or better in the AP poll). Per SP+, their projected full-season schedule strength ranks first in FBS.

The Hogs are projected underdogs for six of their next eight games, and if they want to make something of their season beyond a "very encouraging 7-5," this game is almost a must-win. And their defense will give them a chance.Read more from Bill Connelly's Week 4 preview (ESPN+).

Touchdown of the day

SMU tried to celebrate. The Mustangs really did. However, TCU wasn't having it when they tried to plant their flag on the field.

The Boston College fans were pretty hyped up about this win over Missouri.

This is the interception that sealed the win for the Eagles.

Even the Tigers' social team had fun celebrating the win.

Of course Notre Dame had to savor its win over Wisconsin with this caption.

The City of Fresno has declared this week "Fresno State Football and Quarterback Jake Haener Week." There should be more of this around college football when a team majorly upsets someone like Fresno State did to UCLA last weekend.

To read more about Haener's unpredictable rise, check this out.

Talk about making an entrance.

Introducing Jaxson Skywalker. Yeah, evidently Jaxson Dart has drawn inspiration from Star Wars in case you were wondering what the deal was with his eye black. Dart, however, is out indefinitely after having surgery to repair a meniscus injury.

Stephen A. Smith is a man of his word. He lost a bet to Tim Tebow -- he said Florida would lose by more than three touchdowns to Alabama last weekend, and he had to pay up.

And it's safe to say that the Gators loved this look on him.

There are lots of callbacks to movies this week, and Oregon is on trend with its Dark Knight threads.

Michigan State plays Nebraska, and the Spartans definitely had fun with this reveal in a cornfield.

And Memphis is definitely bringing some heat with its uniform combo.

For more on uniforms, check this out.

A full Soldier Field for Wisconsin-Notre Dame is a pretty sight.

Kevin Kelly doesn't believe in punting, and, yes, you are reading those words correctly. It's an unorthodox way of playing, but a fascinating one nonetheless. Read more about the Presbyterian head coach here.

For all the best signs, check this out.

NIL deal of the week

Cade York is now "queso rich," and it's giving us all the "chocolate wasted" feels.

UConn is really feeling itself today as it's leading Wyoming and whipped out a trick play.

Chris Tyree took this all the way back for the score.

Slipped right on by.

Georgia is running Vanderbilt out of the building.

But, hey, at least the fans are still having some fun with it.

For more on UGA's shutout, check this out.

Jordan Addison is out here taking names and taking ankles.

It's definitely a bad idea to give Bijan Robinson any room.

We're seeing lots of pretty amazing grabs as of late, and this certainly falls into that category.

The precision here is unlike anything else. 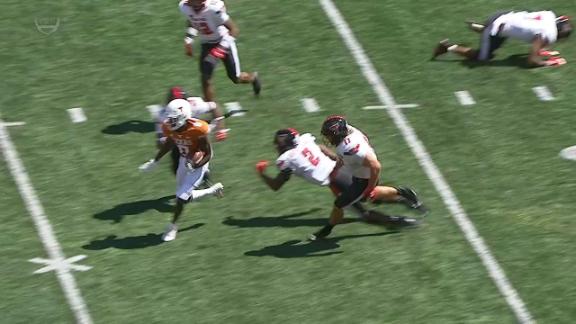 Texas' Xavier Worthy refuses to be tackled on 62-yard TD
Xavier Worthy breaks multiple tackles as he runs 62 yards to the house for a Texas touchdown. 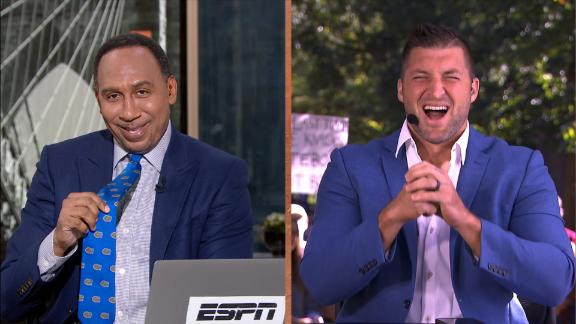 Stephen A. makes good on Gators tie bet with Tebow
Stephen A. Smith shows up to First Take sporting a Florida Gators tie after losing a bet to Tim Tebow. 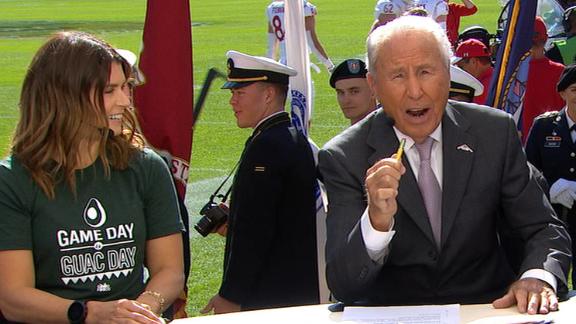 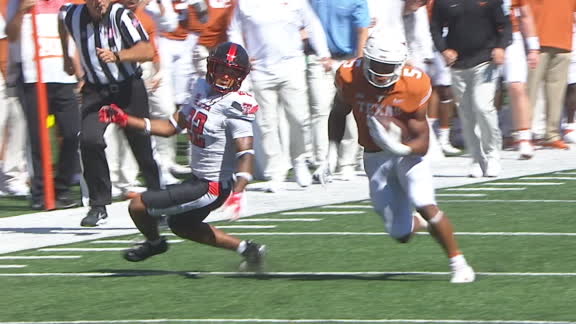 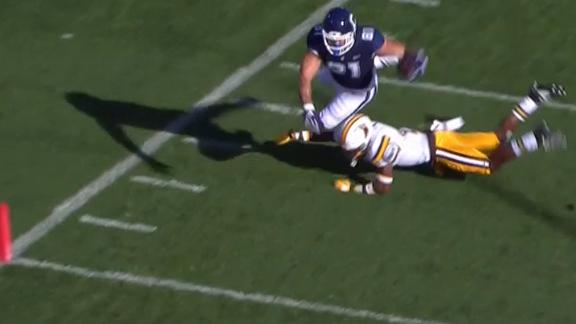