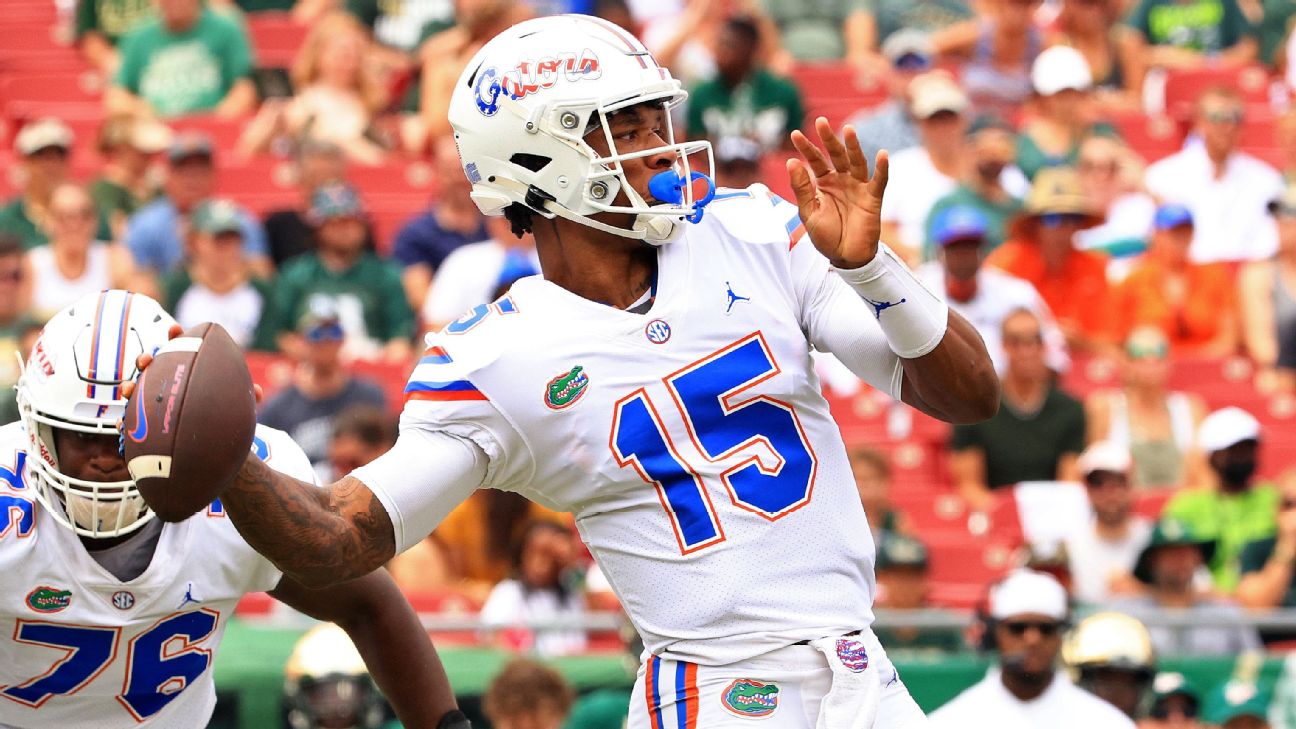 But at the end of the day, here is what our reporters take away from the weekend's action.

The Buckeyes' defense hasn't been the same since Hafley moved on to Boston Collegeafter the 2019 season. Last fall, Ohio State often looked ordinary (talent wise) and unimaginative (scheme wise). This year's unit might be worse in both areas. Ohio State on Saturday had no answers for Oregonrunning back CJ Verdell, a bullying Ducks offensive line and creative playcalls from Joe Moorhead.

Despite excellent recruiting, the Buckeyes lack many superstars on defense. They're also seemingly content to play a vanilla scheme. Kerry Coombs is an excellent recruiter and a great energy guy, but he lacked coordinator experience when he was elevated to the role. The move felt a little lazy at the time, given Ohio State's resources and appeal for proven playcallers. The defense is certainly not on a good trajectory. -- Adam Rittenberg

A QB battle in Gainesville?

Emory Jones waited three years to be Florida'sstarter, and at times he has played OK, especially running the football. But in terms of passing, he has been inconsistent with two interceptions in each of the past two games.

Then there's the freshman, Anthony Richardson, who hasn't been asked to do nearly as much in terms of running the offense but nonetheless keeps making big plays. He did it against FAU in the season opener, rushing for 160 yards and a touchdown on seven carries. And he did it this past weekend against USF, throwing touchdowns on each of his first two pass attempts, followed by an 80-yard touchdown run in the fourth quarter.

Coach Dan Mullen said Richardson "doesn't always do the right thing, but he does special things," which explains why he continues to stand by Jones publicly. Regardless, there's going to be an interesting dynamic moving forward, both in terms of the division of labor and what opposing defenses have to do to prepare for both players. If anything, it gives Nick Saban and No. 1 Alabamaa lot to consider heading into Saturday. -- Alex Scarborough

Not quite Hog Heaven, but getting there

Recruiting is the lifeblood of any good college football program. That's a given. But in taking over an Arkansasprogram that had lost 19 straight SEC games, as Sam Pittman did entering the 2020 season, and facing the challenges of COVID-19, the fastest way to improve the Razorbacks was to develop players, surround himself with quality coaches and create an atmosphere of trust.

Pittman gets a resounding A in all three areas, and the 40-21 beatdown of Texason Saturday is perhaps the best evidence yet that Arkansas is as improved as any program in America from where Pittman found it. And the best news for Hogs fans is that he's a terrific recruiter, and the talent level is only going to get better over the next few years. The Hogs should be 3-0 going into their showdown with Texas A&M on Sept. 25 in AT&T Stadium. The last time they started a season 3-0 was 2016. -- Chris Low

The Big 12 is still Oklahomaor bust

Iowa Statehad a chance to earn a win that would impress the selection committee through November, but couldn't get it done against rival Iowa. Again. Arkansas hammered Texas, taking the shine off of Steve Sarkisian's September. The Sooners took care of business and then some in a 76-0 drubbing of Western Carolina.


With two Heisman hopefuls in the lineup, expectations were high for Iowa State to challenge the Sooners this fall for the Big 12 title -- and it still can -- but not with four turnovers. Iowa State didn't look the part of a top-10 team, let alone ready to contend for anything bigger than the Big 12. Meanwhile, ESPN's FPI gives Oklahoma at least an 80% chance to win each of its remaining games. -- Heather Dinich

The league's biggest problem in the College Football Playoff era hasn't been a lack of ability. It has been too much parity. While the other Power 5 leagues have been dominated by juggernauts like Alabama, Clemson, Ohio State and Oklahoma, the Pac-12 has had a handful of good teams, but no great ones. Look around the league through two weeks in 2021, however, and the league is mostly a hot mess.

USCgot drubbed by a bad Stanford team. Washingtonis 0-2, including a loss to FCS Montana. Utahlost the Holy War for the first time since 2009. In nonconference play, the Pac-12 is an embarrassing 10-11 overall. But none of that matters because UCLAbeat LSUand Oregon beat Ohio State, and for the first time in a long time, the Pac-12 enters Week 3 with a couple of genuine playoff contenders.

Add in Arizona State, and there's a shot the league can finally enjoy a season with enough disastrous teams at the bottom that the few good teams at the top can feast on imbalanced competition all the way to the playoff. -- David Hale

Florida State lost to an FCS opponent for the first time in school history on Saturday night, when Jacksonville Statequarterback Zerrick Cooper delivered a stunning 59-yard game-winning touchdown pass on the final play of the game. But watching the Seminoles lose like that should no longer be a surprise to anyone. Because here is the sad, honest truth about Florida State right now: This is a losing program.

Forget about all the history, tradition and national championships. Florida State entered this season off three straight losing seasons. Willie Taggart was run out of town after less than two of them, but Mike Norvell went 3-6 last year in Year 1, and now the Seminoles are at a new rock bottom on his watch. It is hard to win by playing losing football -- penalties, blown assignments and undisciplined play have become a hallmark in recent years -- and Norvell has not been able to fix any of that. Florida State made plays to lose the game on Saturday night (myriad drops, over 100 yards in penalties), and the coaching staff called plays to lose the game, too. It remains inexplicable that the Seminoles were not in a prevent defense on the final play, no matter what Norvell says.

Now, they head on the road to play a Wake Forestteam that always gives Florida State a challenge in Winston-Salem. But beyond that, Florida State still has games left against Clemson, North Carolina, Miami and Florida. Norvell had no answers afterward, saying the Seminoles would go back to work to fix the mistakes. But Taggart said all that before him, too. So did Jimbo Fisher in his final season (he left with Florida State at 5-6 in 2017). Until Norvell and his players can figure out how to play winning football, nothing is going to change. -- Andrea Adelson

Michigan is 2-0 to start the season, which matches its total wins from last season. The Wolverines should be commended for that, because they already look like a better team than last year, but how good are they? This is probably a two-part question that needs to be broken up between the offense and defense to be answered properly.

The defense has a new coordinator in Mike Macdonald, and by all accounts there seems to be more organization. Players have said the communication on the sidelines is at an all-time high. It's not likely Míchigan will field a top-five defense, but there have already been signs of improvement, and having a healthy Aidan Hutchinson has been a big boost.


The offense, however, might be a different story. Yes, the team put up 47 points against Western Michiganand 31 against Washington, but the stats might tell a different story. Against Washington, Michigan had 352 rush yards on 56 attempts, but it had only 44 passing yards on 15 throws. It could be said that the run game was working, so why not stick with it, but the pass plays that were called were uncreative, lacked the necessary blocking downfield and didn't yield much of anything. That might have worked against Washington, but will that work against Wisconsinor Penn State? Running back Blake Corum is going to be a star for Michigan, and the duo of Corum and Hassan Haskins will have success, but if quarterback Cade McNamara can't balance it out in the passing game, Michigan is eventually going to run into trouble. -- Tom VanHaaren

Sometimes it's fine to escape with a win

The weeks that look terrifyingly boring on paper like Week 2 did oftentimes end up having big upsets and sometimes even ruin seasons. Texas A&Mstruggled with Coloradoand lost QB Haynes King to a right leg injury, but was able to hold on for the 10-7 win. Notre Damewas able to do the same, sneaking past Toledo32-29 after a late touchdown.

Sure, both the Aggies and Irish have problems to work out, and at best both fan bases are shook going into Week 3. But it could have been worse -- just look at Florida State's shocking loss, or the way the Hogs ran all over Texas. -- Harry Lyles Jr.

Iowa could crash the party

The Hawkeyes landed at No. 5 in this week's AP poll after opening the season with a 34-6 win over No. 17 Indianaand drubbing No. 9 Iowa State 27-17 in Ames on Saturday, Iowa's eighth straight win dating back to last season. Suddenly, this season has the look of one where Kirk Ferentz's "mutts," as linebacker Jack Campbell called them this weekend, become the stubborn team that's one of the toughest outs in the Big Ten.

From 2002 to 2004, the Hawkeyes won 31 games in three seasons, then next broke 10 wins with an 11-2 season in 2009. Ferentz won 12 in 2016 and 10 in 2019. While the Hawkeyes' offense is still a work in progress, if we're being polite -- it had just 173 yards in Ames, including 23 total yards in the second half on 0.8 yards per carry -- the defense is one of the country's best, picking off Michael Penix Jr. and Brock Purdy a combined six times. ESPN's FPI has the Hawkeyes favored in every game this season, including against Penn State on Nov. 9, with only the Wisconsin game in Madison considered a toss-up on Oct. 30 -- and Ferentz shut down the Badgers 28-7 to end last season. -- Dave Wilson

It might not matter who plays QB for Georgia

Last season, Georgia was never much of a factor in the CFP race because of shortcomings at quarterback. After Wake Forest transfer Jamie Newman opted out about a month before the start of the season and USC transfer JT Daniels arrived in Athens still hobbling with a knee injury, the Bulldogs ended up starting former walk-on Stetson Bennett. He played admirably well in victories over Arkansas, Auburnand Tennessee, but then the wheels came off during a loss at Alabama. Bennett injured his throwing shoulder, and Daniels was finally healthy enough to play and finished the 2020 season as the starter.

When Daniels was unavailable this past week because of an oblique injury, coach Kirby Smart surprised a lot of people when he opted to go back to Bennett -- and not Carson Beck, whom Smart declared the team's No. 2 quarterback -- but the decision paid off. Bennett completed 10 of 12 passes for 288 yards with five touchdowns in a 56-7 rout of UAB. As long as Georgia's defense keeps playing the way it has in the first two games (it hasn't allowed an offensive touchdown), it might not matter who starts under center. -- Mark Schlabach Finebaum: Ohio State's path to the CFP is very complicated
Paul Finebaum believes Ohio State should be more concerned than Clemson after the Buckeyes lost to Oregon in Week 2. 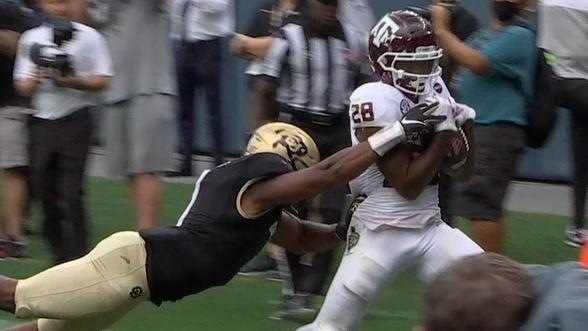