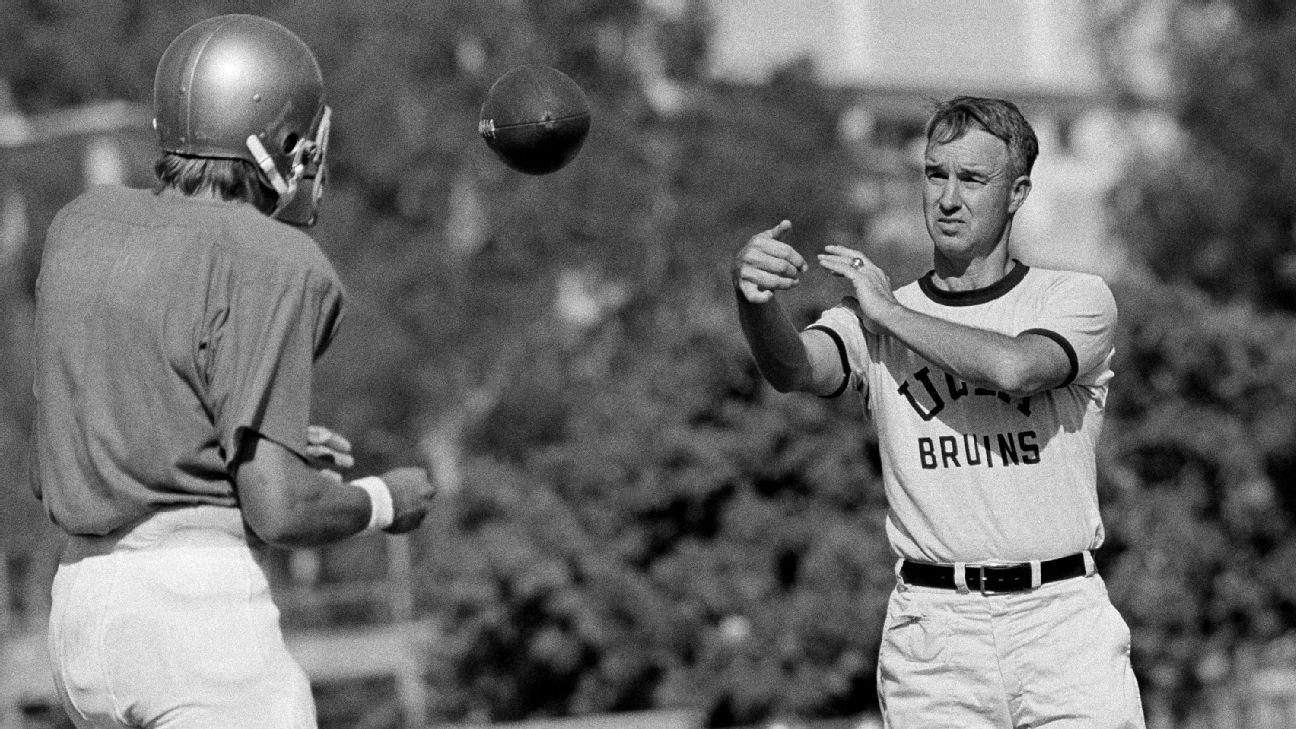 ATLANTA -- Pepper Rodgers, a colorful personality who helped Georgia Tech to an unbeaten season as a player in 1952 and went on to coach the Yellow Jackets as well as Kansas, UCLA and Memphis teams in both the USFL and CFL, died Thursday. He was 88.

A statement from his alma mater said Rodgers died in Reston, Virginia, where he lived after retiring in 2004 from his final job as the Washington Redskins' vice president of football operations. No cause of death was given, but he had recently suffered a fall.


A quarterback and kicker, Rodgers was part of Georgia Tech teams that went 32-2-2, claimed two Southeastern Conference championships and won three major bowl games during his three seasons on the varsity. He capped a 12-0 season in 1952 by throwing a touchdown pass, kicking a field goal and adding three extra points in a 24-7 victory over Ole Miss in the Sugar Bowl.

Georgia Tech finished No. 1 in the International News Service poll, but settled for No. 2 behind Michigan State in both The Associated Press and coaches' polls.

When he returned to Georgia Tech as the coach in 1974, he showed up riding a Harley and sporting a perm, a sign of the freewheeling style that often put him at odds with his bosses and staid alumni.

When coaching in the USFL, he once wore a tuxedo to play a game against the New Jersey Generals, a big-spending franchise owned by future president Donald Trump. Another time, he donned the helmet he wore while serving in the Air Force in an attempt to motivate his team.

But for all his antics, Rodgers stuck to business on the field.

"He's no clown," Memphis linebacker Steve Hammond told The New York Times in 1985. "He's a good coach who likes to have some fun. That's all."

Rodgers began his head coaching career at Kansas in 1967. He went 20-22 over four seasons, including a Big Eight title and Orange Bowl appearance in 1968, before moving to UCLA. After going 2-7-1 in his inaugural season with the Bruins, he went 17-5 and posted runner-up finishes in the Pac-8 over the next two years with an explosive wishbone offense.

Rodgers left an arguably better job at UCLA to return to his alma mater, where he installed the wishbone but failed to match the level of success from his tenure in Los Angeles. His best season was in 1978, when the Yellow Jackets went 7-5 with star running back Eddie Lee Ivery, but he was unable to overcome the lack of modern facilities or the school's then-independent status.

"We were not in a conference and the facilities hadn't changed since I had played,'' Rodgers told The Atlanta Journal-Constitution in 2015. "I knew how hard it was going to be to win there. But that had nothing to do with taking the job. It was about my love for Tech."

Rodgers returned to coaching with the Memphis Showboats of the upstart United States Football League in 1984. He went 7-11 his first season and 11-7 mark the following year with an appearance in the league semifinals, but the USFL went out of business after a failed attempt to move to fall to compete head-to-head with the NFL.

Rodgers had one last coaching job, also in Memphis. In 1995, he went 9-9 with a team known as the Mad Dogs in the Canadian Football League's failed effort to crack the U.S. market. Faced with massive losses and dwindling attendance, the team folded after one season.

"I am devastated to learn of the passing of Pepper Rodgers," Georgia Tech athletic director Todd Stansbury said. "He was a Georgia Tech legend."

Stansbury is a former Georgia Tech player who was recruited to play for the Yellow Jackets by Rodgers.

"I am eternally grateful to him for bringing me here," Stansbury said. "If it weren't for Pepper, I would have never had the opportunity to live out my dreams as a Tech student, football player, alumnus and, now, athletics director. He has also been a mentor and friend throughout my professional career and I will miss him greatly.

"We have lost a great Tech man."

Rodgers closed his professional career in the NFL, where we worked under Dan Snyder in his early years as Washington's owner. The team failed to make the playoffs during his tenure, but he was there for Marty Schottenheimer's final season as coach, the ballyhooed hiring of Steve Spurrier from the University of Florida, and Joe Gibbs' return to the sideline in 2004.

"I was terribly saddened to hear the news about the passing of Pepper Rodgers," Snyder said in a statement. "Anyone who knew Pepper knew what a genuinely good person he was. He was a kind and gentle man who helped guide me as a young owner in the NFL. He had an incredible knowledge of the game and was beloved by everyone in the organization."


Franklin Cullen Rodgers was born in Atlanta on Oct. 8, 1931. He always thought basketball was the best of the three sports he starred in at Brown High School, but football became his calling card after he headed to his hometown university in 1949 on the heels of a state championship.

He carried on that success at Georgia Tech during perhaps the greatest era in the school's history. After the unbeaten season in 1952, which the school still claims as a shared national title, Rodgers led the Yellow Jackets to a 9-2-1 mark as a senior, capped by a 42-19 rout of West Virginia in the Sugar Bowl. He threw three touchdown passes and was named the game's MVP.

Rodgers was drafted in the 12th round by the Baltimore Colts but entered the Air Force instead, where he served as a pilot for five years. He began his coaching career as an assistant at the Air Force Academy in 1958, moved to Florida in 1960 and then to UCLA in 1965.

Rodgers took his first head coaching job before the 1967 season, leaving behind a powerful UCLA team was ranked No. 1 heading into its next-to-last game of the regular season against Los Angeles rival Southern Cal, led by star running back O.J. Simpson.

The Bruins dropped a 21-20 thriller, a game UCLA quarterback and Heisman Trophy winner Gary Beban believes would have turned out differently if Rodgers had still been on the staff.

"We would have not lost to USC by one point, and in essence, the national championship," Beban told the Los Angeles Times. "Coach was worth at least another six points when he was calling the plays."

Rodgers was associated with big names throughout his coaching career. As UCLA's head coach, his quarterback was Mark Harmon, who became better known for his acting career. Rodgers gave Spurrier his first coaching job as a Georgia Tech assistant and later coached Reggie White in the USFL.