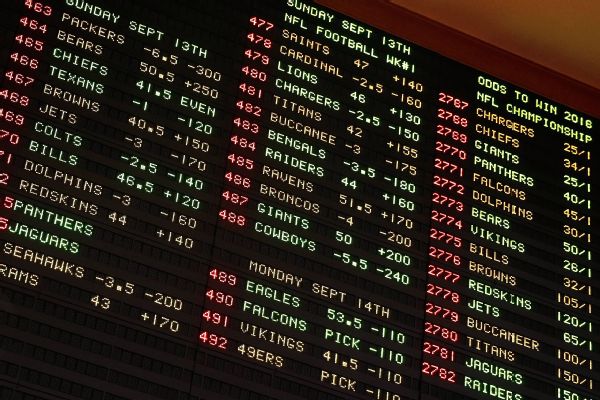 A congressional committee is reviewing federal gambling laws, including the 24-year-old prohibition on sports betting, and plans to introduce comprehensive legislation that also will address daily fantasy sports and other forms of gaming.

In a statement to ESPN, U.S. Rep. Frank Pallone Jr. from New Jersey said current federal gambling laws are "obsolete" and "in desperate need of updating," including those that deal with sports betting.

Pallone's office did not provide a timeline for the new legislation, but communication with stakeholders is underway.

"The laws need a wholesale review to see how they can actually work together and create a fairer playing field for all types of gambling, both online and offline, including sports betting and daily fantasy sports," said Pallone, the ranking Democrat in the House Energy and Commerce Committee. "At the same time, we must ensure the laws are actually creating an environment of integrity and accountability, and include strong consumer protections. I plan to continue discussions with the key stakeholders and then will introduce comprehensive legislation to finally update these outdated laws."

"Daily fantasy, at its core, involves betting on sports," U.S. Rep. Jan Schakowsky, a Democrat from Illinois, said at the hearing.

Three statutes -- the Professional and Amateur Sports Protection Act of 1992 (PASPA), the Federal Wire Act of 1961 and the Unlawful Internet Gambling Enforcement Act of 2006 (UIGEA) -- are the core of a patchwork of federal laws touching on sports betting. The potential new legislation would attempt to harmonize these laws.

PASPA prohibits state-sponsored sports betting in all but a handful of states, with only Nevada being allowed to offer single-game wagering.

Americans are not having trouble finding ways to bet on sports. Despite the prohibition, the American Gaming Association estimates $149 billion is bet illegally on sports in the U.S., mostly with unregulated offshore sportsbooks and local bookmakers. In comparison, $4.3 billion was bet in 2015 at Nevada's regulated sportsbooks.

Cash-strapped states have taken notice of the untaxed funds leaving their borders. Pallone's home state of New Jersey has invested millions of dollars in legal fees fighting the NCAA and major U.S. professional sports leagues to challenge PASPA. In early October, New Jersey filed its second appeal to the U.S. Supreme Court on this issue.

In addition, Pennsylvania passed a resolution this summer urging Congress to "lift the Federal ban on sports betting and to allow states that authorize, license and regulate casino gaming, including the Commonwealth of Pennsylvania, to legalize sports betting through its licensed facilities." New York Assemblyman J. Gary Pretlow is planning a legal challenge to PASPA in 2017.

The major sports leagues that have opposed the legalization of sports betting for decades are not moving as quickly. NFL commissioner Roger Goodell said Wednesday at an owners meeting in Houston that the league remains "very much opposed to legalized gambling on sports."

Sources have told ESPN that the league's opposition is not shared by all team owners. Those views could be on display in 2017, whenOakland Raidersowner Mark Davis is expected to officially apply to relocate the franchise to Las Vegas. Three-fourths of the 32owners must approve any relocation.

The NCAA, like the NFL, remains strongly opposed to expanding legalized sports betting, and, while the NHL and Major League Baseball have shown signs of a softening stance, they have stopped short of coming out in full support.

For now, the NBA is the only major professional sports league to openly support legalization, with commissioner Adam Silver calling for Congress to create a federal framework to regulate sports betting. The NBA remains a proponent of legalizing sports betting, but is not ready to lobby Congress on the issue and is still a plaintiff in the New Jersey case.

Meanwhile, lobbying efforts to overturn PASPA, led by the American Gaming Association, are set to begin in 2017.

"The next (U.S.) president is going to have that issue of legalizing sports betting on their desk," AGA CEO and president Geoff Freeman has said.