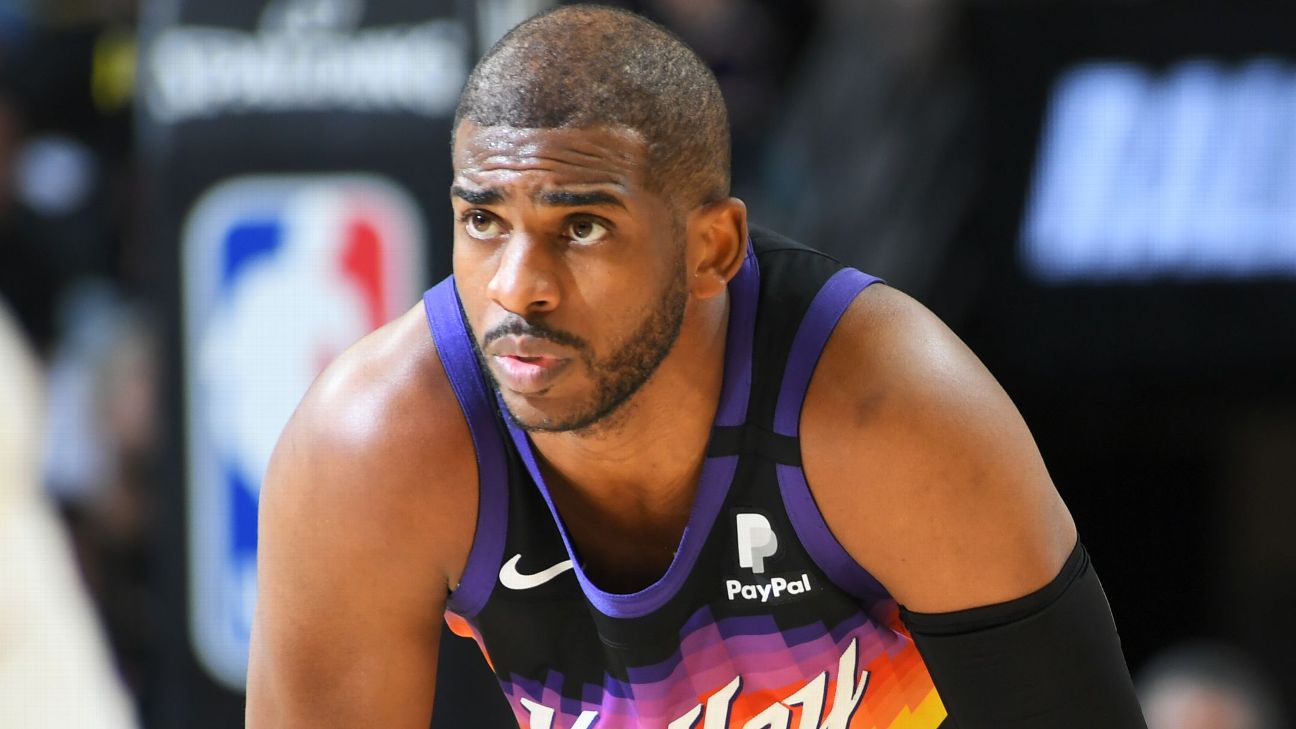 If you don't fully recollect what unfolded in the basketball world two weeks ago (weird, but OK), allow me to remind you: Mike Krzyzewski announced he will retire after next season, Danny Ainge moved on from the Boston Celtics, Brad Stevens was promoted to general manager andJoel Embiidhad an MCL tear.


To be fair, we've lived some life since then -- specifically in the hours since 9 a.m. ET on Wednesday.

If the NBA were my internet, I would have unplugged and attempted to reboot the router days ago. But seeing as that's not how this works, I will instead regale you with the happenings of a wild week in the association so you too can head into tonight's playoff action (Philadelphia 76ers vs. Atlanta Hawks and Utah Jazz vs. LA Clippers, 7:30 p.m. ET/10 p.m. ET on ESPN) feeling slightly overwhelmed.

The collective NBA high we were riding afterKevin Durant's otherworldly performance on Tuesday night (49 points, 17 rebounds and 10 assists) came crashing down as sources confirmed that Phoenix Suns point guard Chris Paul is out indefinitely upon entering the NBA's health and safety protocols. The timing of the league's mandated coronavirus-related isolation period puts the star's availability for the Western Conference finals injeopardy.

In a four-game sweep against the Denver Nuggets, 36-year-old Paul averaged 25.5 points on 61.8% shooting, 58.3% from 3, 100% from the free throw line, plus a 41-to-5 assist-to-turnover ratio.The health and safety protocols mark the most recent obstacle in a history of playoff woes for the Point God who led the Suns out of obscurity this season only a year after being banished, I mean, traded to Oklahoma City from Houston.

Ramona Shelburne and Brian Windhorst reported that Los Angeles Clippers star Kawhi Leonardwould miss Wednesday's Game 5 against the Utah Jazz with a right knee injury and could be out the remainder of the series. Sources told ESPN that more imaging needs to be done to determine the severity of the sprained ligament after swelling subsides, but there is "no timetable for his return."

Aside from Durant in the East, nobody has been more impressive this postseason. In the first round, Leonard became the first player since Shaquille O'Neal in 2000 to both score 200 points and shoot 60% or better in a single series. In four games against the Jazz, he averaged 27.3 points and 7.5 rebounds. To say that the Claw is critical to the Clippers' playoff success would be putting it mildly.

Here for a good time, not a long time? After one season at the helm in New Orleans, Stan Van Gundy is out as the head coach of the Pelicans. His limited tenure with the franchise was underwhelming as the team finished with a bleak31-41 this past season and fell short of making the play-in tournament in the Western Conference.


New Orleans was Van Gundy's fourth stop as an NBA head coach and his first since sitting out the previous two seasons. Van Gundy had success at his first two stops in Miami (.605 winning percentage) and Orlando (.657).However, he had just one winning season in four years with the Detroit Pistons from 2014 to 2018.Van Gundy joins Nate Bjorkgren as coaches who've parted ways with their teams after being hired before the season. According to the Elias Sports Bureau, it's the fifth time in the past 30 seasons that multiple teams have changed coaches who were with the franchise for just one season.

The Washington Wizards announced that they will not extend the contract of coach Scott Brooks, which expired after their first-round loss to the Philadelphia 76ers. Sources told Adrian Wojnarowski that the two sides failed to come to an agreement on a new deal.

Just last month, Brooks led the Wizards to the playoffs for the first time in three seasons despite a 34-38 season.In five seasons, Brooks -- who was hired in hopes of luring Washington-area native Durant home to play for the Wiz Kids (spoiler alert: that didn't happen) -- was 183-207 with three playoff appearances, including making the Eastern Conference semifinals in 2016-17.

It's the end of an era for the Dallas Mavericks as the team announced longtime president of basketball operations and general manager Donnie Nelson is out after 24 seasons with the franchise. Nelson has been widely credited for scouting and pushing for the two biggest acquisitions in Mavericks history: the draft-day trades for Dirk Nowitzki andLuka Doncic, 20 years apart.

According to sources, Nelson's departure comes after internal friction due to the increasing decision-making influence of Mavericks director of quantitative research and development Haralabos Voulgaris. Sources expounded that the former professional gambler was hired by the Mavs in 2018 and has reported directly to owner Mark Cuban and communicated directly with coach Rick Carlisle despite Nelson's objections.

LaVar Ball tried to tell us how it was going to be. Charlotte Hornets rookieLaMelo Ballwas voted Rookie of the Year, sources told Adrian Wojnarowski. The youngest Ball brother's path wasn't conventional, as he spanned the globe to start his professional career before taking his talents to the NBA. But his first season was undeniably special. Ball averaged 15.7 points, 5.9 rebounds, 6.1 assists and 1.6 steals per game for Charlotte this season, shooting 35.2% from 3-point range and was an immediate factor in the Hornets playing winning basketball in a way uncommon to rookies.

Despite all this, his fellow Rookie of the Year finalist, Minnesota Timberwolves'Anthony Edwards, was less than convinced that Ball was deserving of the honor. As exhibited by this tweet:

On the other hand, Ball's teammates, who undoubtedly want him to continue passing them the rock next season, seemed satisfied with the selection:

Not to upstage Donnie Nelson but the news that Rick Carlisle won't return to coach the Dallas Mavericks after 13 seasons with the team had way more shock value. Although, if you paid attention to the way22-year-old superstar Luka Doncic interacted with Carlisle this season --making animated gestures on the court when he disagreed with a decision or yelling at Carlisle in front of assistant coaches and teammates -- perhaps this bit of NBA news wasn't so surprising. According to sources, the tension between Doncic and the tenured coach had become increasingly concerning within the organization. However, moments after the Mavs' season ended with a Game 7 loss to the LA Clippers on June 6,Dallas owner Mark Cuban told ESPN that Carlisle would return as the team's head coach. I'm sure he believed it when he said it.

Carlisle, who had a 555-478 record during his 13 seasons in Dallas, setting a franchise record for wins, had been the NBA's third-longest-tenured head coach behind only San Antonio's Gregg Popovich and Miami's Erik Spoelstra. He touts a 33-38 postseason record with the Mavs but had not advanced past the first round since their title run 10 years ago (shoutout Dirk Nowitzki).

It was fun while it lasted? On Friday morning, Brad Stevens made his presence felt in his new role as president of basketball operations by shipping Kemba Walker out of Boston after two seasons and ruining all of my "Cardiac Kemba is back in New England where he belongs" UConn-centric beliefs. The Celticsagreed to send the All-Star point guard, the 16th pick in this year's NBA draft and a 2025 second-round selection to the Oklahoma City Thunder for Al Horford, Moses Brown and a 2023 second-round pick, sources told ESPN's Adrian Wojnarowski.

While it's unusual for a move of this significance to be made before next week'sNBA combine, the tradeaccomplished key objectives for both teams: The Celtics get significant financial flexibility as Stevens tries to retool the roster around its young core of Jayson Tatum and Jaylen Brown (Walker is owed roughly $73 million over the next two years). Meanwhile, the Thundercontinue to acquire draft capital as they rebuild their roster around Shai Gilgeous-Alexander. OKC now has 18 first-round picks over the next seven drafts.