'I'm just praying' Albert Almora Jr, father of 2, opens up about horror of girl being hit by foul ball

KTRK
HOUSTON -- Chicago Cubs outfielder Albert Almora Jr. says he immediately locked eyes with the girl hit by a foul ball off his bat during the fourth inning of the game against the Houston Astros Wednesday night.

Almora hit a line drive into the field-level stands down the third base line, where the girl sat. His reaction was instant.

Almora put his hands on his head, eventually falling to his knees near home plate. He was consoled by teammate Jason Hayward and manager Joe Maddon.

Cubs outfielder Albert Almora Jr. was left in tears after a line drive went just beyond the net, striking a child in the stands at Minute Maid Park.

"Credit to Miley as well. Came to me and you know, tried to calm me down," Almora said.

The Associated Press photos captured the intensity of the moment as the girl was picked up by a man and whisked up the stairs. As she was carried away, she was conscious and crying while fans looked on.

Almora, understandably distraught during the game, spoke to ESPN after about how he tried to regain his composure and continue with his at-bat.

"I finally came to my senses after the next half inning when I went over to the stands," Almora explained. "I just couldn't hold it anymore."

The 25-year-old was comforted by a security guard as he tried to get more information on the girl's condition but only received "unofficial updates."

"I wish I could say more, I don't know. I'm just praying. I'm speechless. I'm at loss of words, being a father, two boys ... but God willing I'll be able to have a relationship with this little girl for the rest of my life. But just prayers right now and that's all I really can control," Almora said, barely looking at reporters.

Almora was also asked about whether he believes netting should be put around the entire stadium.

"Right now, obviously, I want to put a net around the whole stadium..." Almora trailed off, still appearing to be on the verge of tears.

Like all Major League Stadiums, Minute Maid Park, where the Astros play, has protective netting near the field to protect fans from foul balls.

In February 2017, the Astros added expanded netting from dugout to dugout, reaching 12 feet in height. The netting also increased in height behind the backstop, reaching a maximum height of 32 feet.

Additional netting will be used to create new seating availability and increase fan options at the ballpark.

The girl was sitting in what looked to be the third or fourth row about 10 feet past where the netting ends.

The Astros released a statement, saying that the girl was taken to the hospital. No further details were given.

"The Astros send our thoughts and prayers to the entire family," the team said, in part.

The Astros released the following statement. Our thoughts are with the entire family. pic.twitter.com/f1VGVP1kiu

He signed with the Cubs after being selected in the first round by the team out of Mater Academy Charter in Hialeah Gardens, Florida, in the 2012 Major League Baseball First-Year Player Draft.

He spent time with the minor league teams before being promoted to the Major Leagues in June 2016.

As Almora told reporters Wednesday night, he's a father of two boys AJ, who was born in 2016, and Antino, who was born last October.

Diana Williams reports on a young girl being hit by a foul ball at a New York Yankees game. 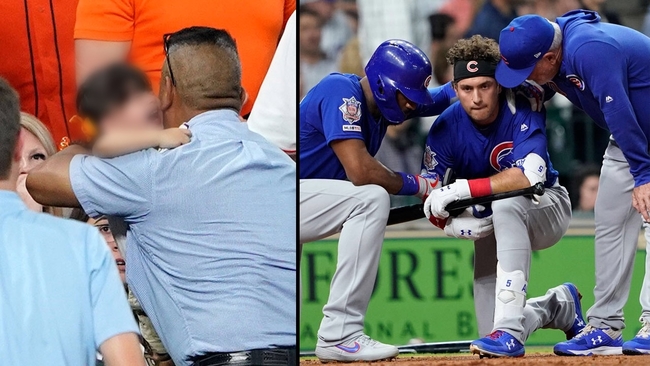