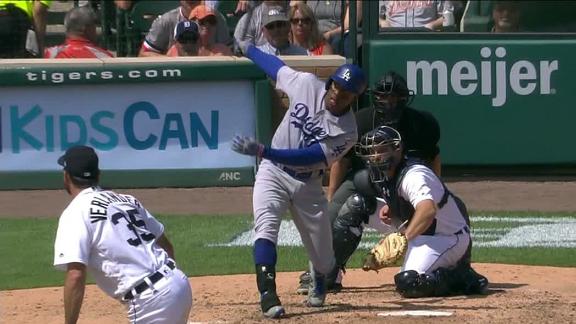 Newly acquired outfielder Curtis Granderson hit his first home run as a Dodgeron Sunday, a solo shot off Justin Verlander that was Los Angeles' lone run in a 6-1 loss to the Tigers in Detroit.

Granderson, acquired Friday from the New York Mets, was playing in his second game for the Dodgers, and the home run was his first hit and one of only three all day for L.A.

The Mets announced Sunday that the player to be named acquired for Granderson is minor league right-hander Jacob Rhame, who will report to Triple-A Las Vegas.

Rhame, 24, had a 4.31 ERA and 10.31 strikeouts per nine innings in Triple-A for the Dodgers this season. MLB.com had him ranked as the Dodgers' 28th-best prospect.

Granderson, 36, joined the Dodgers amid his fourth season with the Mets and 13th overall after four seasons with the New York Yankees and five with the Detroit Tigers, who chose him in the third round of the 2002 draft out of the University of Illinois at Chicago.