Dak Prescott: I wish I could split rookie award with Ezekiel Elliott 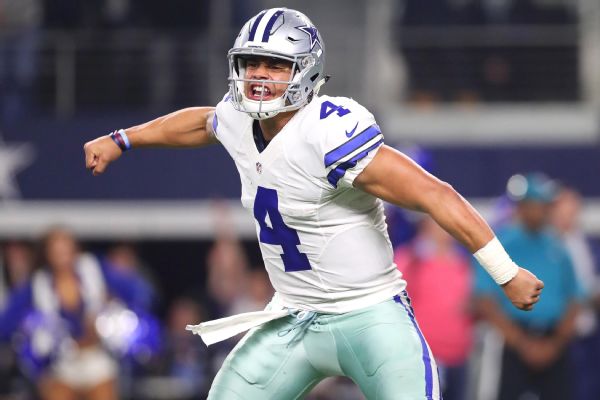 HOUSTON, Texas -- Dak Prescott started as an afterthought and ended up as the Associated Press' Offensive Rookie of the Year.

Prescott became the first Cowboy to win the honor since Emmitt Smith in 1990, edging teammate Ezekiel Elliott, who finished second.

His first order of business during Saturday night's NFL Honors event was asking if he could share the award with Elliott, saying:"Do we have a knife so I can cut this in half?"

Prescott acknowledged the team's offensive line for allowing "both of these rookies to do what we did this whole season."

Prescott, accompanied by Elliott onstage, also thanked "the other 31 teams for passing up on me as much they did."

Anationwide panel of 50 media members who regularly cover the league voted on the awards.Prescott edged Elliott in rookie votes, 28 to 21.

At the start of training camp, Prescott was the Cowboys' third quarterback behind Tony Romo and Kellen Moore.

Moore suffered a broken ankle on Aug. 2, and Romo suffered a compression fracture in his back on Aug. 25, giving Prescott the chance to start.

As he returned to 100 percent health, Romo, the franchise leader in passing yards and touchdowns, conceded Prescott earned the right to continue as the Cowboys' starter. Prescott set a team record for a quarterback with six rushing touchdowns and opened his career with 176 consecutive passes without an interception, most in NFL history.

Elliott, selected a first-team All-Pro at running back, had an equally as compelling case for the award. He set team rookie records in rushing yards (1,631) and touchdowns (16) in helping the Cowboys to the best record in the NFC in 2016. Expectations for Elliott were astronomical once the Cowboys took him with the fourth overall pick, considering their offensive line boasted three All-Pros in Tyron Smith, Travis Frederick and Zack Martin.

Elliott managed to exceed expectations, breaking Tony Dorsett's team rookie mark of 1,007 rushing yards in the Cowboys' 10th game. He had four consecutive games with at least 130 yards rushing and five for the season, tying Eric Dickerson and Mike Anderson for the most by a rookie in NFL history.

Elliott threatened Dickerson's rookie record of 1,808 yards but was held out of the meaningless season finale against the Philadelphia Eagles by the coaches. His 1,631 yards are third most in history by a rookie, trailing Dickerson and George Rogers, who had 1,674 for the New Orleans Saints in 1981.

Mack was, by far, the standout player on a Raiders defense that ranked only 26th overall. He had 11 sacks, took part in 73 tackles, forced five fumbles and recovered three, and even had an interception for a touchdown.

He's the second Oakland defender to win the award; cornerback Lester Hayes got it in 1980. Miller also had a big year with 13 sacks, 78 tackles and three forced fumbles for the fourth-rated Broncos.

The Cowboys' Jason Garrett was named AP NFL Coach of the Year.

Garrett led Dallas to an NFC-best 13-3 record in a turnaround season before the Cowboys lost to Green Bay in the playoffs.

In his seventh season at the Cowboys' helm, Garrett used two rookies, Prescott and Elliott, operating behind a terrific offensive line, to lift Dallas to its best record in nine years.

"This is an extension of our football team and I really accept it on their behalf,'' said Garrett, who took over as Dallas coach in 2010. "I coach with some really great guys and I'm really fortunate to coach with so many great players that go about it the right way, and it's really just an extension of that. It's a team award.''

The Cowboys also had the third-stingiest scoring defense in the NFC.

Garrett is the first Dallas coach to win the award since Jimmy Johnson in 1990. Tom Landry won it in 1966.

Sitting out the first four games after a protracted preseason holdout didn't damage the third overall draft pick much. He still managed 12 sacks as the key threat on a San Diego defense that ranked only 16th overall.

"I don't really set goals like this for myself very often, awards,'' Bosa said. "But I definitely wanted this one. I'm really happy I got it done.''

That performance earned Bosa 37 votes from a nationwide panel of 50 media members who regularly cover the league.

Bosa, whose father played three seasons with Miami (1987-89), is the second Charger to win the honor. Linebacker Shawne Merriman earned it in 2005.

Green Bay Packers receiver Jordy Nelson was an overwhelming choice as the AP NFL Comeback Player of the Year.

Nelson severely tore ligaments in his right knee in the 2015 preseason and missed the entire season. He returned to full-time action last summer, caught six passes and scored a touchdown in the opener and never looked back.

Nelson finished the season with 97 receptions for 1,257 yards and a league-high 14 touchdowns in helping Green Bay win the NFC North. That performance earned him 36 votes from a nationwide panel of 50 media members who regularly cover the NFL.

Nelson is the first Packer to win the award and only the second wide receiver. Carolina's Steve Smith was a co-winner in 2005.

Apparently headed to the head-coaching job of the 49ers after helping Atlanta on Sunday against New England in the Super Bowl, Shanahan earned 13 votes from the nationwide panel.

"Quite simply this is the most meaningful honor an NFL player can receive, and I am flattered beyond words that the selection committee deemed me worthy of it,'' Fitzgerald said.

"More than anything it is a reflection on my parents whose words and example taught my brother and me the value of service and the importance of giving back.''

Manning called it "an honor to be mentioned in the same breath with Walter Payton.''

"None of us do what we do on behalf of charity or in our communities to get recognized,'' he said. "We do it because we truly care. You want to make a difference in people's lives and in our communities. But to be recognized and know that people do notice your work is nice.''