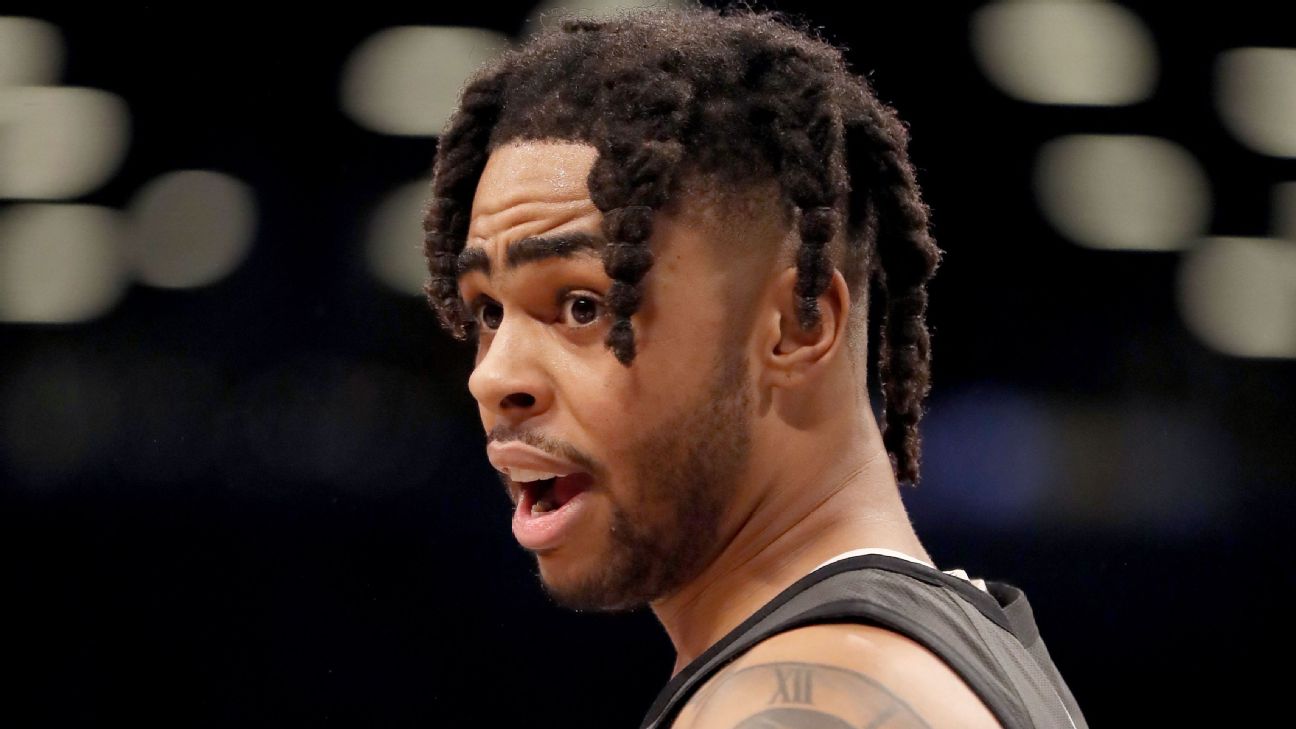 MINNEAPOLIS -- Not yet finished with his fifth NBA season, D'Angelo Russell has landed with his fourth team.

Karl-Anthony Towns and the Minnesota Timberwolves sure don't want him to leave.

"It's surreal to really think that instead of us just talking on the phone or playing video games with each other and talking about how our teams are doing and everything, but now we're getting to do this every day with each other," Towns said.

Russell was introduced at an open-to-the-public news conference Friday along with six other players acquired during the trading spree this week. He will be a gametime decision for Saturday's game against theLA Clippers, as he's been dealing with a quad injury.

"I've been seeing from a distance, and from close-up, the ship that Karl's kind of been driving around here for years," Russell said. "Players come and go from here. I take it they didn't appreciate the situation here or whatever that may be, but watching from a distance I knew I could help Karl. I've never played with a dynamic big just like him."

President of basketball operations Gersson Rosas was hired May 1, and he was certain then that the roster needed an overhaul to fit the fast-paced, 3-point-heavy playing style he's been trying to implement with coach Ryan Saunders.

His first attempt to pair the smooth-shooting Russell as a pick-and-roll machine with the versatile 6-foot-11 Towns came last summer when Russell was a restricted free agent. Russell instead went from Brooklyn to Golden State in a sign-and-trade deal, but Rosas and the Timberwolves didn't give up on the goal.

When the injury-wrecked Warriors, the only team below Minnesota in the Western Conference, agreed to take Andrew Wiggins and a pair of 2021 draft picks, the Wolves finally had the sidekick for Towns they've been seeking.

Towns and Russell were the first two selections in the 2015 draft, with Russell going to the Los Angeles Lakers. For the Wolves to pair them together, owner Glen Taylor had to approve crossing the luxury-tax threshold.

Towns is 24, and Russell will be later this month. They're both near the bottom of the league at their respective positions by most statistical defensive measures. Then there's the fact that the majority of their teammates are new, with Towns and Josh Okogie the only players Rosas inherited last spring who are still with the Wolves.

There will be plenty of growing pains, but Towns and Russell have a relationship that dates to their teen years on the elite circuit of camps and tournaments. That ought to be as big of an advantage off the court as their complementary skills on it.

"This is crazy to me to wake up and see the situation that I'm in and feel the love of somebody wanting me to be here. It's just a surreal moment for me right now," said Russell, who has career highs in points per game (23.6) and 3-point shooting (37.4%) this season.

The atmosphere was especially festive surrounding a team on a 13-game losing streak with the fourth-worst record and the lowest average attendance in the NBA, but that's precisely why the introduction was turned into a lunchtime spectacle inside an office tower and shopping center across the street from Timberwolves headquarters.

There were welcome balloons for Russell and his fellow newcomers placed along the practice courts. Towns headlined the club's contingent at the airport the night before, when Russell and Jacob Evans and Omari Spellman, the other players acquired from Golden State, arrived on a chartered plane. With the temperature in the teens, Towns handed Russell his new Timberwolves jersey and, naturally, a winter coat as the two embraced on the tarmac.

There is speculation now surrounding the Phoenix Suns and shooting guard Devin Booker, who played one season with Towns at Kentucky and is also a friend of Russell. Booker was in the 2015 draft class, too, the 13th overall selection by the Suns. The three of them became especially close during the pre-draft workout process.

In fact, the trio was featured together on the cover of Slam magazine last fall. During the interview for that article, Russell opined about the three of them playing together and even promised it would eventually happen.

Booker, who's among the top 10 in the league scoring leaders for a third straight season, just began a five-year, $158 million maximum-salary contract this season as the fulcrum of Phoenix's plan. Russell and Towns would have to be patient.

In the NBA these days, though, the power of player friendships can't be underestimated.

"I'm just focused on this team. I think everybody knows that. There's always going to be outside noise, but I'll leave that to you guys," Booker told reporters Friday.

Booker said he was proud of Russell, happy for him and Towns with their opportunity to unite.

"I feel like he's at a place that he's going to stay. He doesn't have to worry about where his next city is," Booker said. "He has a place that wants him very bad and is going to use him to the best of his ability."

Towns referenced the short-lived, inside-outside tandem that Kevin Garnett formed in Minnesota with Stephon Marbury in the mid-1990s before Marbury forced his way out.