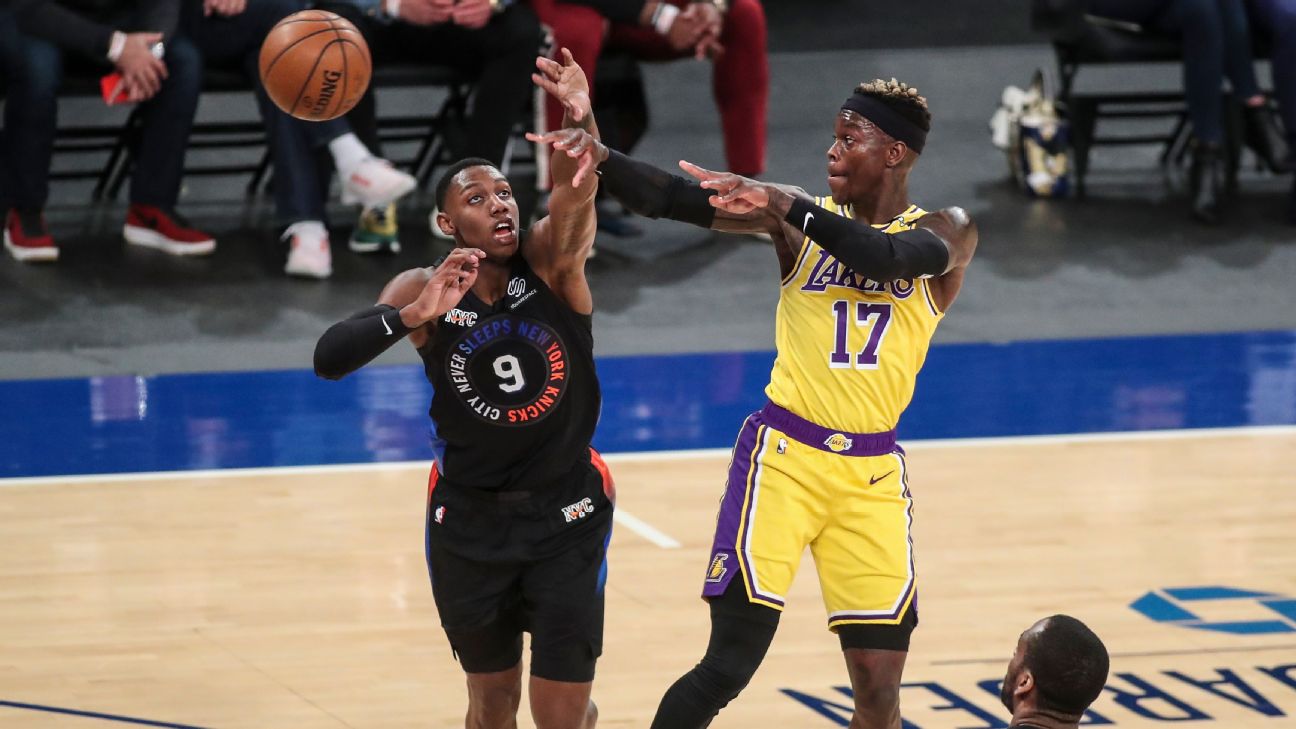 Fresh off a 111-96 loss to the New York Knicks in which the Los Angeles Lakers committed a season-high 25 turnovers, point guard Dennis Schroder was asked about his team's mounting miscues.

"Thank you," Schroder said sarcastically when a reporter mentioned L.A. ranking dead last in the league in turnovers per game. "Thank you. Thank you."


It's understandable if the line of questioning touched a nerve. It's been a recurring problem for the defending champions this season. Monday was their ninth game with 20-plus turnovers this season, most in the NBA.

Schroder was responsible for a team-high five turnovers as the Knicks made L.A. look like a completely different team than the group that shocked the Brooklyn Nets with a 25-point win just a couple days prior.

"It starts with me and I take the blame for it and we just got to do better," said Schroder.

The eight-year veteran who shut down contract extension talks with the Lakers last month, preferring to wait until the offseason, now ranks 37th in assists-to-turnover ratio among the 57 guards in the league averaging 30 minutes or more, according to ESPN Stats & Information research.

He was hardly the only one culpable, however. Newly-acquired center Andre Drummond had more turnovers (four) than points (three) against the Knicks, and the Lakers' other three starters -- Kyle Kuzma, Kentavious Caldwell-Pope and Markieff Morris -- had three turnovers apiece.

"Really poor passing, some bad decisions, and some of it, you have to credit the defense. But as good as we were offensively two nights ago, we were just as bad tonight -- and it's disappointing," said Lakers coach Frank Vogel. "We had 25 turnovers, and we got our shot blocked nine times, OK? Which we view as turnovers as well. So, definitely not good enough on the offensive end tonight."


The Lakers coughed up seven of those turnovers in the third quarter, when the Knicks outscored them 26-16 to break the game open. They weren't just errant passes, either. Knicks defenders stripped the ball right out of the Lakers' hands on several occasions.

"They're a great strip team," Caldwell-Pope said. "[Nerlens] Noel with great hands, Julius [Randle]. Lot of guys that have great hands on that team. So we wanted to make the simple pass tonight which we didn't. We tried to force a lot of things in the paint.

"I mean it's very frustrating, just turning the ball over ... Put a shot up, at least," he continued. "That gets frustrating. That starts to drop the energy that we have for the game. Starts to bring people down."

The loss halted the momentum that the Lakers had seemingly started to build with Anthony Davis and LeBron James still sidelined, as they came into Monday winners of three of their last five.

"We just got to, all of us as a collective group have to be better at taking care of the ball," said Morris. Obviously we don't have Bron, who led the league in assists last year, to make plays for us. So that's going to be more magnified. And I think if we change that, we can definitely be a lot better right now."