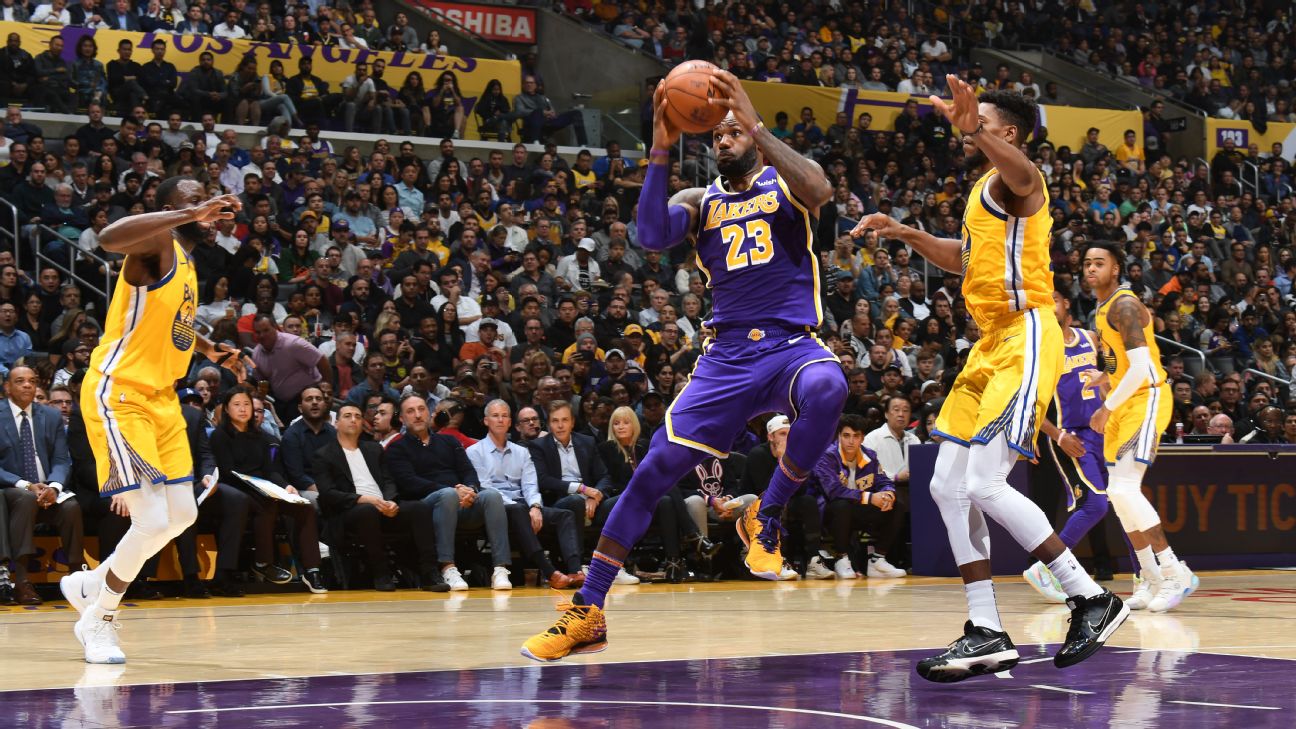 Legend has it he developed his appreciation for the pass as a 9-year-old playing for the Summit Lake Hornets in a rec basketball league in Akron, Ohio. He fed a diminutive teammate named Sonny Spoon by rolling the rock his way. It was the only way the little guy could control the ball without being knocked over. Spoon scooped up the delivery, put the ball in the hoop and James relished in Spoon's score more than if it were his own.

Decades later, as he has climbed into the top five on the NBA's all-time scoring list and made the defining play of his illustrious career with a chase-down block in Game 7 of the 2016 NBA Finals, his passing remains as important of a skill as ever.

Now in his 17th season, James has shifted from small forward to point guard. And as the Los Angeles Lakers have stacked up wins, so too has James racked up assists.

Should he maintain his lead, it would be the first assist title of James' career. Can he keep it up?

"I don't know," James said recently. "That's never been a goal of mine. ... The assist has always been my favorite because it gives my teammates an opportunity to score. And that's what's always mattered to me."

Individual statistics don't matter much to James these days -- earlier this month he even wore a hat embroidered with a patch that read "awards mean nothing" to a game in Dallas -- but his ability to continue to imprint control on the game as he enters his mid-30s does matter.

If James keeps dishing dimes at this rate, he would obliterate the record of the best assist average for a player in his 17th season or later (John Stockton currently holds the mark with 8.7 assists per game in 2000-01).

"He's going to make the right play every time and he delivers the ball on time, on target everywhere or just about everywhere he throws it -- to the 3-point line or lobs at the rim or back cuts or whatever," Lakers coach Frank Vogel said. "He's just one of the best passers I've been around."

James' first of a dozen dimes Wednesday night came just seven seconds into a 120-94 win against the Golden State Warriors, a pinpoint lob sent from beyond the 3-point to JaVale McGee, who readily deposited it into the basket.

James' Lakers teammates recognize that they'd better be alert at all times when sharing the court with him.

"Playing with LeBron, he's the center of attention at all times,"Kyle Kuzmasaid. "Everybody's looking at him, so sometimes when guys come here, they're not really used to having wide-open shots, and that's something that he supplies."

Not all open shots are equal. Just like the defense pays extra attention to James, so too do the fans. When James provides an open look, it can feel as if every eye in the arena turns toward the shooter.

"My rookie year it was a lot of pressure," said Quinn Cook, now on his second stint alongside James after playing with him in Cleveland during the 2015 preseason. "I was like, 'Wow, LeBron is passing me the ball. I got to make it.' But I'm kind of over that phase now. He puts us in great positions to be successful and you just want to shoot the ball with confidence."

Avery Bradley gets the impression that some of the passes James makes are only possible because of the four-time MVP's uncanny court vision.

"I was joking the other day with one of the guys on the bench," Bradley recalled. "I said, when I watch film, and a coach says, 'You should have seen this pass ...' He sees that during the game in real time. Just incredible."

Rajon Rondo won an assists title in the 2015-16 season, averaging 11.7 helpers with the Sacramento Kings. He says there's no real secret to earning the distinction.

"What does it take? Guys making shots," Rondo said.

Rondo was reticent to rank his and James' passing ability: "It might be 1A and 1B," he said. That's exactly how James and the Lakers' big-time offseason acquisition, Anthony Davis, have been similarly described.

It is vital for the Lakers to get the most out of Davis this season, not only to give themselves their best chance to win, but to pave the way for the big man to re-sign with the franchise as a free agent next summer.

Putting James at point guard has assured that Davis will be a focal point of the Lakers' offense. Through the Lakers' first 11 games, Davis received 29 assists from James, according to data from ESPN Stats & Information, more than any other Lakers player.

"I told him give me the ball. He's doing a great job with that," Davis said with a laugh. "He has great vision, he can pass with the best of them, so it's tough for them to stop that pick-and-roll, with me setting the pick and he handling the ball, and then when that's clogged up he's able to find our shooters on the weak side so he's making all the right plays."

And James is just as likely to pick apart a team with the pass in the open court.

Last season, then-Lakers coach Luke Walton employed an egalitarian transition game. Whoever grabbed the long defensive rebound or burst through the passing lane to swipe the steal -- be it a point guard like Lonzo Ball or Rondo or even Brandon Ingram, Lance Stephenson or Michael Beasley -- was empowered to be the engine on the break.

Vogel, however, gave the keys to the car back to James and wants him driving as much as possible.

"We've created an environment where we want to have a primary ball handler, whereas last year it was both LeBron and other guys who could get out and push on the break," Vogel said. "Most fast-break teams have that type of mindset of how it is and how anybody can push, anybody can handle. We've gone a little bit old school that way. That's probably why you're seeing LeBron more in that situation."

Earlier in his career, James caught heat when he passed to teammates in end-of-game situations rather than call his own number.

As time has gone by, those instincts have shifted; James has come to relish being the guy to carry the consequences of the make-or-miss proposition. He has assisted on six go-ahead field goals in the final 10 seconds of the fourth quarter or overtime (seven, including the playoffs), according to ESPN Stats & Info research, and has made nine such shots in that span (17, including the playoffs).

Yet, unmistakably, if he sees an open teammate -- be it George Hill under the hoop in Game 1 of the 2018 NBA Finals or Kentavious Caldwell-Pope on the wing in a regular-season game against the Orlando Magic last season -- James will find him.

"He's probably one of the best decision-makers in the history of the game," Vogel said.

The ball might go through James, but play with James and you will get the ball.

"I'm just trying to play within the system of what we're trying to do in the game plan, and get my shooters and get my bigs opportunities," James said. "I don't get the assists if my teammates don't make the shots, that's what it all boils down to. So they deserve all the credit." 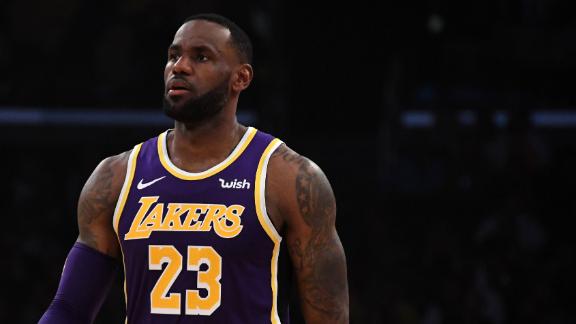 LeBron leads the Lakers past the Warriors
LeBron James drops 23 points and continues to pad his assist average with 12 more tonight in the Lakers' win vs. the Warriors. 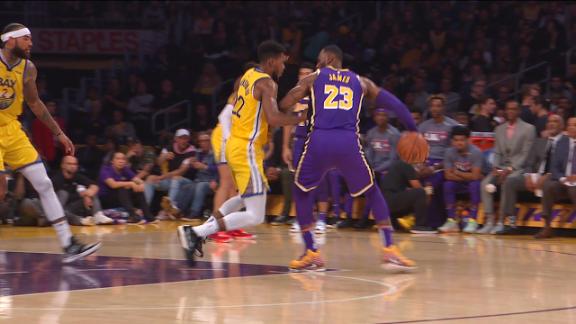 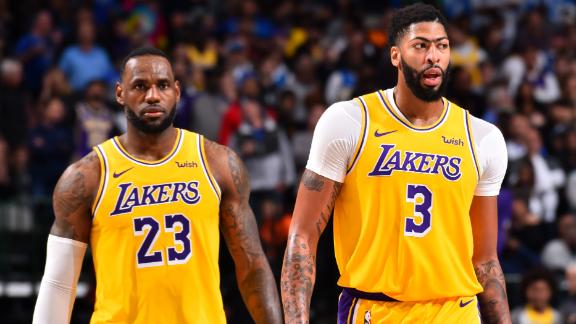