Doc Rivers: Referees not above losing composure too 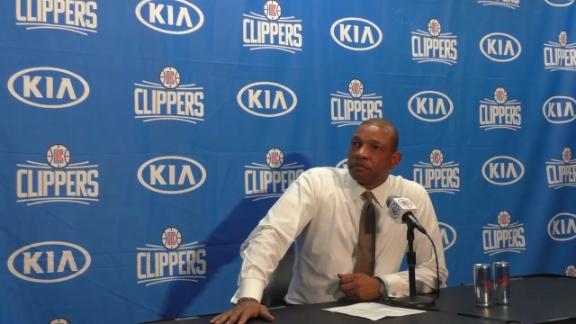 LOS ANGELES -- Clipperscoach Doc Rivers became the latest in a long line of players and coaches to voice his displeasure with the referees this season aftera 126-118 loss to the Minnesota Timberwolves on Monday night.

After watching his team rack up four technical fouls in the fourth quarter, which included the ejections of Rivers and assistant coach Mike Woodson, the head coach sounded off in frustration.

"Listen, we don't want to get fourth-quarter techs," Rivers said. "My tech, by that time, the game was over. I literally got thrown out of the game for saying, 'You guys gave us some tough calls tonight.' That was it. No swear words. Nothing. And the point I make all the time, if I earn a tech, I'm fine with it, but just like players can lose their composure, officials can lose their composure, as well."

What drew the Clippers' ire was the discrepancy in free throws. The Timberwolves shot 39 free throws, including 16-of-17 in a career-high performance from point guard Jeff Teague, while the Clippers went to the line just 22 times.

"Mainly, up until the very end of the game, Teague had more free throws than our entire team," Rivers said. "I thought we were driving and just as physical as them. It's rare when you're the home team and the free throws are 39-22. And a lot of their fouls came down the stretch, when the game was over; it wasn't even as close as that."

Clippers big man Blake Griffin was whistled for a technical foul with 4:50 left in regulation, with his team hanging onto a two-point lead. It shifted some momentum back toward the Timberwolves and upset Rivers and his staff.

"Whether it was or wasn't, I can't be the one to get a tech there in the fourth quarter," Griffin said. "That put us in a hole and kind of started the whole onslaught, for lack of a better word, of technicals we got throughout the last four or five minutes, whatever it was. So I got to be better. But there's a reason why there's so much disparity and so much back and forth and so much tension right now [between players and officials]."

Clippers assistant coach Sam Cassell got another technical foul a few minutes later, before Rivers and Woodson were kicked out of the game right before its conclusion.

"Why we lost the game is because the rebounding, the offensive rebounding; they destroyed us. And they got to the free throw line. It's rare where you lose a game and you shoot 56 percent, and we lost that game. So I thought overall our guys played extremely hard. We made a lot of defensive mistakes that we can get better in, but overall, I liked the spirit of our team, I liked how we played. I just didn't like the results."

"Not a great officiated game, but it happens," Williams said. "It happens in the NBA every once in a while. I just thought they were the more aggressive team, played harder down the stretch, got some calls that went their way. That kind of shifted the momentum of the game; it happens."

This was Rivers' first ejection of the season but the 16th of his career, according to ESPN Stats & Information.

"It is what it is," Rivers said of the officiating. "I don't have any control over that. With our guys, what I always tell them is to keep our composure. No fourth-quarter techs. I honestly -- I heard what Blake and Sam said. I guess you can give a guy a tech for anything. I didn't think either one of them really earned it. But you still can't get 'em."

Williams didn't want to comment further when pressed on the outcome.

"It happens," he said. "I'm not donating my money to the NBA tonight."