Dodgers-Astros breakdown: Inside the wild, benches-clearing sixth inning and what's next 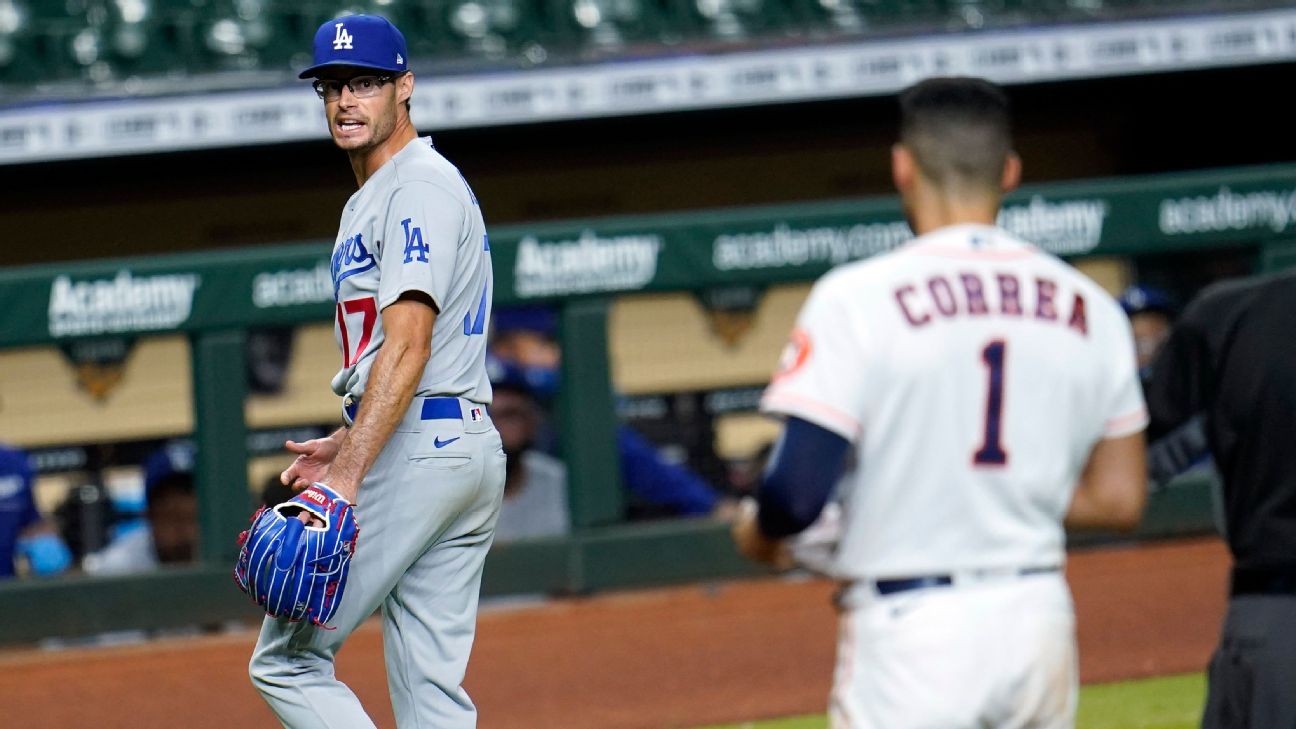 Tempers flared in the first Los Angeles Dodgers-Houston Astros matchup since an offseason of fallout from Houston's 2017 sign-stealing scandal -- andJoe Kelly, a Dodgers reliever who was not part of that season's World Series between the two teams, was at the center of it all.

If you thought the Dodgers were going to simply move past that World Series loss when they took the field Tuesday night, Joc Pederson's Instagram story should have been enough to let you know it was still very much on their minds.


When the Los Angeles team plane landed in Houston, Pederson posted a picture of him and his teammates making their way down the steps on the tarmac with a one-word caption:

"Bangggg," as in even during a pandemic and in front of an empty stadium, they haven't forgotten the sign-stealing scandal, the trash can bangs, or the 2017 World Series banner they feel would be hanging at Dodger Stadium instead of at Minute Maid Park if not for Houston's transgressions.

Pederson doubled down by saying, "They're not cheating their way to get there," when he was asked if the 2020 World Series champion should have an asterisk next to its name after playing a shortened season.

But for the first 5 innings of Tuesday night's 5-2 L.A. victory, Dodgers-Astros played out quietly, just like any other game in this 2020 season. And then, in the bottom of the sixth -- Bangggg! -- it was on.

Here's what happened in that inning fueled by Kelly's wildness, some high-and-tight pitches, heated words that TV cameras picked up clearly without fans to drown them out ... and three years of pent-up anger.

'Balls get away sometimes -- but not that many'

Owner of a 1.38 career WHIP and a viral offseason video in whichhe broke his bedroom window with an errant pitch, Kelly isn't exactly known for his control. So, after Jose Altuve popped out, nothing seemed out of the ordinary when Kelly fell behindAlex Bregman3-0 on pitches that missedon both sides of the strike zone, including two breaking balls.

But when that 3-0 pitch left Kelly's hand in the form of a 96 mph fastball just over Bregman's head, the mood changed quickly as Kelly let out a demonstrative yawn from the mound while the Astros third baseman squatted to avoid getting hit.

After the game, Kelly denied any intent on the pitch, saying, "My accuracy isn't the best," and that the inside fastball "wasn't my best pitch."

Astros manager Dusty Baker offered a different take after the game: "Balls get away sometimes -- but not that many in the big leagues. When you throw a 3-0 fastball over a guy's head, now you're flirting with ending his career."

Words at first base: 'Just get on the mound, little f---er'

Next up for the Astros was Michael Brantley, who, like Kelly, was not a part of that 2017 World Series matchup between Houston and L.A. Brantley was on a Cleveland team that lost to the Yankees in the American League Division Series; Kelly's Red Sox were eliminated by, you guessed it, the Astros in that same round.

The at-bat played out quietly at the plate, with Kelly throwing three straight knuckle curves and Brantley slapping the third offering to Dodgers first baseman Max Muncy. Things heated up quickly with Kelly covering first base and Brantley running hard to avoid the would-be double play.


In his stretch to cover the bag, Kelly left his right leg over the front of the base and Brantley's foot clipped it as he ran by. No harm, no foul -- right? Not quite. Kelly seemed to take exception to the contact and glared at Brantley from near first base.

And here's when a very 2020 moment came into play: As Kelly stared out at Brantley, the words "just get on the mound, little f---er" echoed from the Astros' dugout, clear enough to be heard on the TV broadcast and certainly by Kelly on the field.

After a slow walk back, Kelly did, indeed, get on the mound to faceYuli Gurriel. And everything, except Kelly's control, seemed to have settled down. Kelly walked Gurriel on four pitches, but none of the four seemed intentional: He started with a fastball high over the center of the plate, followed by another fastball up. A third pitch came inside and sent Gurriel scrambling out of the way -- but it was an 86 mph curveball -- and, finally, Kelly threw a 3-0 fastball that missed up.

Gurriel tossed his bat, removed his padding and slowly made his way down to first base. Everyone seemed calm.

Brouhaha averted, right? Not so fast.

Correa vs. Kelly: A new meme is born

With two outs in the inning, Kelly started the at-bat by throwing an errant breaking ball over the head ofCarlos Correa-- one of the 2017 Astros who has been most vocal during the sign-stealing fallout and also the owner of a second-inning home run off starterWalker Buehler. Correa reacted by removing his helmet, wiping his brow and stepping back in for the next pitch, and Kelly appeared to say nothing as he ran in to cover home and retrieve the ball.

Things were still calm ... for the time being. With a 2-2 count, Correa was a few feet from having this all play out very differently when he laced a ball just foul down the left-field line, before striking out with a poor swing at an 88 mph curveball that dipped out of the strike zone.

Kelly, according to Baker, offered his own critique of Correa's swing as they made their way off the field, yelling, "Nice swing, b----" while making a mocking pouty face that instantly became an internet sensation.

And it was on. At least about as on as it can be with managers, umpires and players mixing in some social distancing while rushing toward each other and exchanging heated words outside the Dodgers' dugout.

Here's what stood out during this first benches-clearing scene of 2020:

Joe Kelly received an eight-game suspension for his actions, which he appealed, andDave Roberts got a one-game ban as a result of Kelly's actions, MLB announced in a statement. Roberts will serve his during Wednesday's Astros-Dodgers finale.

So where will things go from here? Well, the Dodgers and Astros take the field again Wednesday night (7 ET on ESPN), withDustin May and Cristian Javierscheduled to take the mound. Will we see another heated exchange like Tuesday's sixth inning brought?

"We don't start nothing, but we don't take nothing, either." 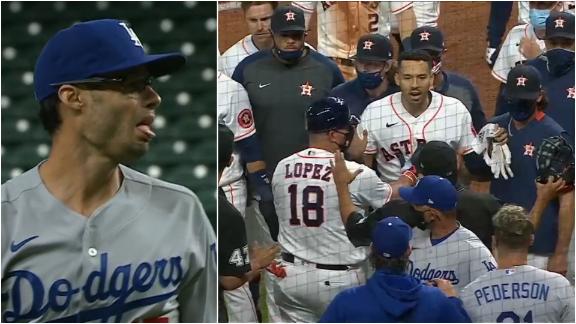 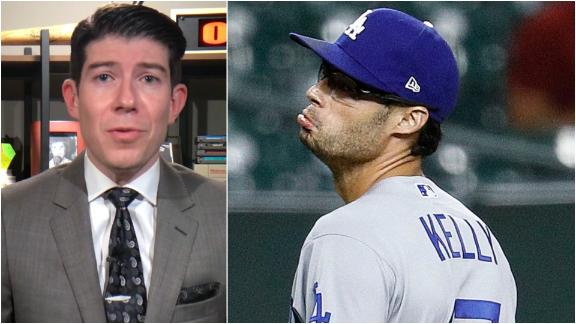