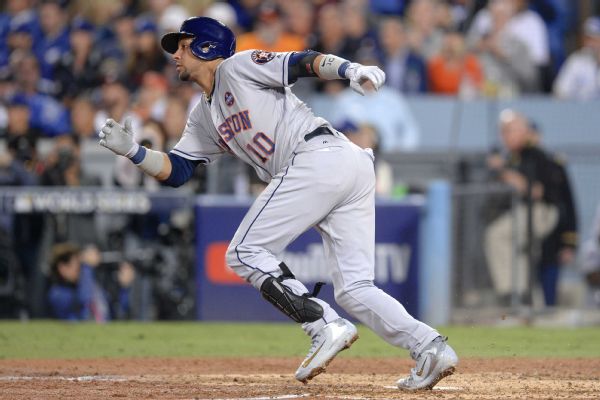 After hitting a home run off Los Angeles Dodgers pitcher Yu Darvish in Game 3 in Houston, cameras caught Gurriel using his fingers to slant his eyes in a gesture that is considered offensive to people of Asian descent; Darvish is of Japanese and Iranian descent.

Gurriel later issued an apology. MLB suspended him five regular-season games without pay, beginning next year, and it will cost him about $320,000.

During pregame introductions, the first since the World Series shifted from Minute Maid Park to Dodger Stadium, the boos were noticeably louder for Gurriel than for any other Astros player.

When Gurriel came to the plate to lead off the second inning, fans got on him again. Dodgers starter Rich Hilleven stepped off the mound for a moment as the jeers grew louder and later acknowledged that it was a "silent gesture'' to condemn Gurriel's insult.

"I think the one thing was just to let the crowd speak their mind," Hill said. "I didn't think anything else would be as loud as that. The people spoke. I left it to that, and that was it.

"That was the best way to go about it, not hitting him or doing anything like that, but making sure that things like this shouldn't happen."

The Dodgers won 3-1 to send the series to a decisive Game 7 on Wednesday at Dodger Stadium. Before Tuesday's game, Darvish, who is scheduled to start Game 7, maintained his stance of forgiveness toward Gurriel.

"I wasn't that frustrated at that point when I saw it the first time," Darvish said through an interpreter. "And then after the game like he contacted us and said, 'Hey, I'd like to meet you and apologize,' but I told him, 'Hey, you don't have to do that, because you made a comment and, like, I'm not that mad.' So like I really didn't care that much about that."

Astros outfielder Carlos Beltran did his best to counsel Gurriel -- who did not speak to reporters after Tuesday's game -- through the boos and try to calm any lingering tensions from the incident in Houston.

"I told [Gurriel], 'Just think about it like they're yelling, 'Yu' -- the two letters in your first name,'' Beltran said. "I told him to just try to flip that and use it as an advantage.

"Sometimes it's hard to do that. But at the end of the day, Yuli is a good man. He made a mistake and he apologized. It was offensive for Yu Darvish, but he was able to turn the page right away. He had some good quotes focusing on the positive and not the negative.''
Report a correction or typo
Related topics:
sportsespnworld seriesmlbrich hillhouston astroslos angeles dodgersyu darvishracistyuli gurrielmockingsuspension
Copyright © 2020 ESPN Internet Ventures. All rights reserved.
More Videos
From CNN Newsource affiliates
TOP STORIES