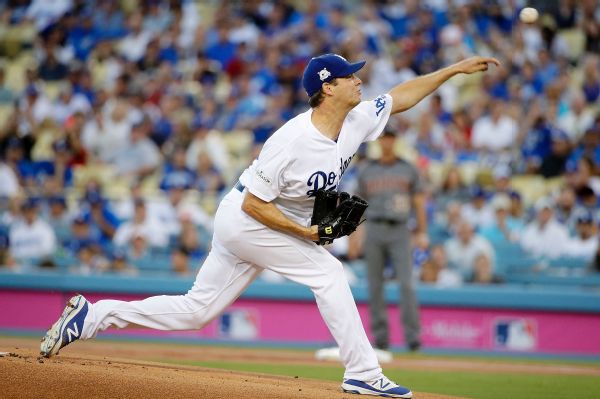 Roberts said that after Dodgers ace Clayton Kershaw starts in Game 1 on Saturday at Dodger Stadium, he'll be followed by Rich Hill in Game 2. When the series shifts to Chicago for Tuesday's Game 3, Roberts will turn to Yu Darvish and then Alex Wood.

That rotation alignment is the same one Roberts used during the Dodgers' three-game sweep of the Arizona Diamondbacks in the NL Division Series, although Wood's scheduled Game 4 start wasn't needed.

"Just kind of felt good in the DS with that," Roberts said. "I think just to continue as we kind of looked into matchups with things like that, just to stay and keep the guys on turn just made sense for us."

For Kershaw, it will be his first Game 1 NLCS start since 2009, a luxury stemming from the Dodgers' 104-win season, top seed in the NL bracket and quick work of the Diamondbacks in the NLDS.

"It's a different position for us," Kershaw said. "In years past, it's been Game 5s and lots of travel and not having home field. So it's definitely a different spot for us."

The Cubs on Saturday announced that leftyJose Quintana, who pitched 2/3 of an inning in relief in the Cubs' Game 5 clincher Thursday, would start Game 1 over John Lackey.

Lackey, the Cubs' fifth starter, didn't pitch against the Washington Nationals in the NLDS.

The Dodgers do have a question mark outside of the rotation, however, as shortstop Corey Seager missed workouts for a third consecutive day because of a "muscular issue" in his back, according to Roberts.