Don't count out the Los Angeles Kings yet; there are some Quick fixes for what ails LA. 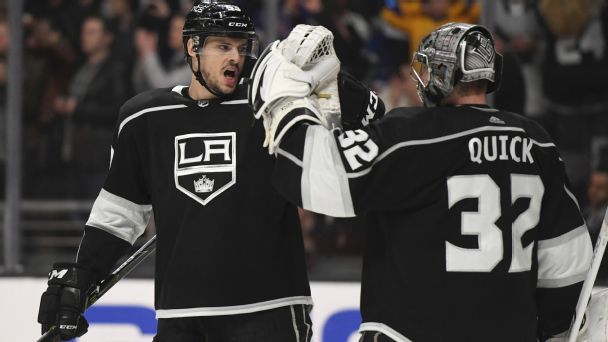 At the start of the New Year, the Los Angeles Kingswere tied for the second spot in the Western Conference. They even looked likely to challenge theTampa Bay Lightningfor league supremacy. But a six-game losing streak brought L.A. quickly back to the pack. Are they still a Stanley Cup contender? Our roundtable of writers has some suggestions for the Kings.

What ails the Kings -- and how can they fix it?

OK, it was against a New York Rangers team whose tank hit empty in the third period, and on a night with very specious officiating. But the 4-2 win ended the Kings' six-game losing streak, and offered a few signs of encouragement for Los Angeles.

Thanks to that aforementioned officiating, the Kings had three power-play goals. Unlike in L.A.'s six games without a win, when its power play was 1-for-12, it looked sharp in going 3-for-3 against the Rangers. At even strength, the Kings played better in their own end in front of Jonathan Quick, who faced 23 shots, and got bodies in front of Henrik Lundqvist on the other end.

But in the bigger picture, there are two reasons not to panic about the Kings. The first is that despite this precipitous drop, their win last night gave them 55 points -- the same number as theCalgary Flames, with whom they are tied for third in the Pacific Division (with one game in hand), and the Colorado Avalanche, in the last wild-card spot (two games in hand).

The second is that the cavalry is going to arrive soon in the form of centerJeff Carter, who has missed all but six games this season after sustaining a cut on his left leg from a skate blade in October. While the rest of the league overpays for veteran help at the trade deadline, the Kings will be adding arguably their most potent offensive weapon back to their lineup at a critical time.

Emily Kaplan, national NHL reporter: Before beating the Rangers, the Kings were mired in their worst losing streak since 2007. Things would look pretty bleak in Los Angeles if not for this fact: The Pacific is still wide open. There's plenty of time to right this ship.

So what ails the Kings, who are battling thePhiladelphia Flyersfor title of the NHL's Streakiest Team? Offense has become an issue, especially in the first period. Notice how Los Angeles fell behind the Rangers 2-0 early? Unfortunately, that's typical for the Kings, who have scored only 31 goals in the first period this season, which is tied for the second-worst mark in the league. (The poorBuffalo Sabresonly have 19.) Los Angeles hasn't scored a first-period goal in six consecutive games. What's worse, the Kings have a minus-11 differential in the opening frame. This helps explain why this team didn't hold a lead in a game during a stretch that spanned from Jan. 4 until the Rangers game on Sunday night.

"Score more goals" is a good prescription for any struggling team. When I've watched the Kings over the past month, I've seen a team that doesn't have a very aggressive presence in front of the net. Traffic in front of the goalie always helps.

So too, apparently, does a fight. Los Angeles was down 2-0 less than eight minutes into Sunday's game, but a scuffle between Adrian Kempe and Brendan Smith at the end of the first period proved to be the turning point. I'm not saying fighting is the panacea, but I do think the Kings played more emotionally in the final two periods as they stormed back for the win. If they play with that kind of emotion until the end of the year, they're going to be just fine.

Chris Peters, NHL insider: The Kings have been a bit of a tough team to read all year. As Emily notes, they've been awfully streaky, and there's usually no one reason for that. Compounding the relative lack of goals (and shot generation has even been an issue during this recent downturn), is that Quick has been stopping pucks at slightly below the league average save percentage since the Kings' seven-game winning streak in late November/early December ended. That's not to say he's to blame, but swings in performance over the regular season have kind of become the norm for Quick.

Over his past 14 starts, Quick owns a .913 save percentage, including a .918 mark at even strength. Prior to this recent stretch, Quick had a .930 save percentage and was among the NHL's top goaltenders in that category. When your goaltender is playing that well, it obviously goes a long way and probably hides a few other warts. Now that Quick's playing slightly below his career average numbers, the results aren't coming for this team.

We've seen this more in recent seasons from Quick. Overall, his 2017-18 season has been really good, with a .924 save percentage and 2.34 goals-against average. In the win over the Rangers on Sunday, Quick was resilient and bounced back from giving up a pair in the first period. He halted a personal five-start losing streak and might be able to get himself back on track. Even if he's somewhere in between the numbers he's put up recently and where he was in the first few months of the season, that's going to give the Kings a really good chance to make some noise. I'm with Greg in that there's no need to panic yet, but it could remain a wild ride to the finish seeing as we're never quite sure what the Kings are going to do on a nightly basis at this point.

Sean Allen, fantasy columnist:The Kings just need to be patient. Five of the eight games they've lost since Dec. 23 have been by only one goal (if you remove empty-netters). That's a thin line between winning and losing five of those eight.

Additionally, the Kings have been hurting down the middle significantly without Carter. Last season, Anze Kopitar led the Kings in faceoffs with 1,693, with Carter right behind him at 1,415. With Carter out, Kopitar is now on pace for 1,858 faceoffs this season, while no other Kings center is on pace to even crack 1,000. That's a hefty workload for one center to shoulder.

Carter is a massive piece of this Kings lineup. His veteran status, and the presence of Kopitar make it easy to forget that Carter led this team in goals last season (and it wasn't close; he had 32 goals to Tanner Pearson's 24). In the past three seasons, Carter easily paces the Kings for shots on goal plus missed shots on goal per game, a metric I like to use in fantasy hockey to see who is attempting to fire the most pucks on goal.

The bottom line is that the Kings' streak hasn't been an ugly one. It's been the result of a bad bounce here or there. That's coupled with the fact that they are missing arguably the second-most-important piece of their forward attack. Carter is skating on his own this week as he recovers from an ankle injury and should get the Kings back on the heels of theVegas Golden Knightsfor the stretch run in the Pacific.
Report a correction or typo
Related topics:
sportsespnpostseasonnhljeff carterpacific divisionjonathan quickstanley cup playoffslos angeles kingswestern conferenceplayoffs
Copyright © 2022 ESPN Internet Ventures. All rights reserved.
TOP STORIES
Villanueva's former top aide admits belonging to alleged deputy gang
Gov. Newsom pardons woman who killed her pimp as a teen
SF couple gets $1,500 fine for parking in their driveway
After cyclist death, Griffith Park temporarily closes road to cars
UPS driver, 24, collapses, dies in SoCal heat
Uvalde school police chief resigns from city council
4th of July fireworks in Southern California: Where to watch
Show More
New Glassell Park restaurant at center of gentrification debate
14 suspects grab and run out with merchandise from Century City mall
California bid to create legal drug injection sites advances
Maryland woman wins lottery for 3rd time, cites game-winning strategy
Flight delays ease up Saturday during chaotic travel weekend
More TOP STORIES News