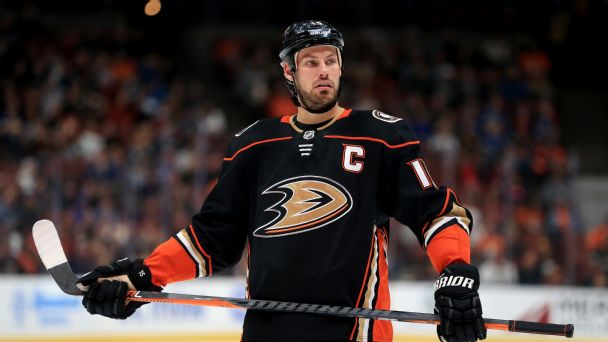 Ryan Getzlaf likes to ignore frustrating news as much as possible. Especially when it involves March Madness.

"I try not to look at the results until the third day of the [NCAA men's basketball] tournament," the Anaheim Ducks captain told ESPN last week. "I don't like to know if my bracket's f---ed already."

As captain, Getzlaf used to be tasked with running the Ducks' tournament pool. He's thankful for a digital age in which the brackets are maintained online. "No more shuffling through those damn papers," he said, laughing.

He has more pressing matters than keeping track of his teammates' Final Four picks, with the Ducks desperately trying to finish among the Western Conference's final eight. They have 86 points and sit in third place in the Pacific Division but are only two points up on the Dallas Stars, who are on the outside looking in.

I spoke with Getzlaf, 32, about the playoff race, why Anaheim stumbled early this season and how he balances being a Duck and a dad.

ESPN: The Western Conference playoff race this season is as intense as I can recall it being. Does it compare with any other races you've been a part of?

Getzlaf: I can't recall a particular year, but I remember having slow starts where the games down the stretch have been very important. I think we draw on those situations, based on where we're at, and hopefully use that to our advantage when it comes to playing the right way going into the playoffs, provided we get in.

ESPN: How much do you pay attention to the standings?

Getzlaf: To be honest, not much. We have SportsCenter on in the locker room. When you're around the rink, you're answering questions about it, so you obviously know what's going on. But I don't pay much attention to it at home.

ESPN: Do you keep yourself sane by shutting out hockey at home?

Getzlaf: Yeah. I've never been a huge numbers guy. Most of the time, I don't even know what's going on around the league. Now that I have a family, it's even more so. I have four kids who are all into different things. So it's a nice way to shut the brain off and not worry about hockey.

ESPN: The Ducks were mentioned frequently as a division-title contender, if not a Stanley Cup contender, before the season. Are injuries the main reason you haven't gotten on track?

Getzlaf: Those are kind of excuses. But the reality is it's not just the injuries and the guys you're missing, but it's not having your group together and playing the way you want to play throughout the year. It was a weird scenario with that many guys hurt for the whole first half of the year. We really didn't get our team together until December. So we've done a decent job of getting into the playoff race.

ESPN: So is the mindset now, "Just get in it and we can win it"?

Getzlaf: Yeah, that's been the mindset. We started without [Ryan Kesler],Hampus [Lindholm]andSami [Vatanen], and then I went down for an extended period of time as well. So from December on, we knew we had to do whatever it took to get into the playoffs. That's still our mentality now.

ESPN: You have eight players 33 years old or older on the roster. Is there a sense that the Stanley Cup window isn't open for very much longer for this group, especially with a few folks up for free agency?

Getzlaf:I don't look at the free-agent stuff a whole lot. I understand that there's always turnover, but for the most part this is a group that we like. We've added some pieces ... obviously, losing Patrick Eaves was a big blow this year, too. Hopefully, whether it's this year or next year, that makes us deeper. But we have the ability to win now. We're just looking at every year, trying to take advantage of it.

ESPN: Let me ask you about one of those veterans you've played with for a while: Corey Perry. The past two seasons, he hasn't scored goals at nearly the same pace as he used to. As a linemate and a teammate, what is your diagnosis?

Getzlaf: A guy who has scored at the rate he has for the first 10 years of his career ... it's hard for anybody to maintain that. And I think that ... you know, there are all kinds of different things. We're getting older. He has a family now. Last season was his first year with a kid. And that adds a different element to the game. It can change your preparation away from the rink and all those kinds of things. I think it all contributes into it.

ESPN: I remember talking to you a few years ago, when your family was growing, you said that fatherhood gave you a different level of maturity that spilled onto the ice.

Getzlaf: It did a little bit, but my first year as a dad was one of my worst years in the NHL. [Getzlaf had just 11 goals and 57 points in 82 games, and the Ducks missed the playoffs.] It was a really difficult time for me. So I tell people this all the time: Kids have been the greatest blessing in my life. They help me appreciate the game, appreciate family, all that kind of stuff. But that first season [2011-12], I felt guilty all the time for leaving. I felt like I was missing out on things. You have to learn, your wife has to learn, the dynamic that's going to work for your family.

ESPN: As a captain, do you have to, like, have "the talk" with new fathers about this stuff?

Getzlaf: Well, to be honest with you, I talked to many people when I was going through it. I calledScotty [Niedermayer] a couple of times, I called Brad May one time. Those are conversations that help. But -- and I know this is a little bit cliché -- but there's really not a whole lot that can prepare you for parenthood. You have to just live it. Especially in our world, with how much it changes your daily life and how much more important things feel for you away from the rink.

ESPN: Last thing: What were your thoughts on a contemporary of yours, Alex Ovechkin, getting to 600 career goals?

Getzlaf: It's incredible. He is one of the best goal scorers I've seen in my time. You know, I have no idea how he does it. I go through stretchers where I'm getting a point every night and I feel like I'm nowhere near what those guys do. At the end of the year, I look up and it feels like players like him must score every single night.

ESPN: But that's this league now, right? Looking up and feeling like you've accomplished something, and Connor McDavid is scoring at like a point and a half per game?