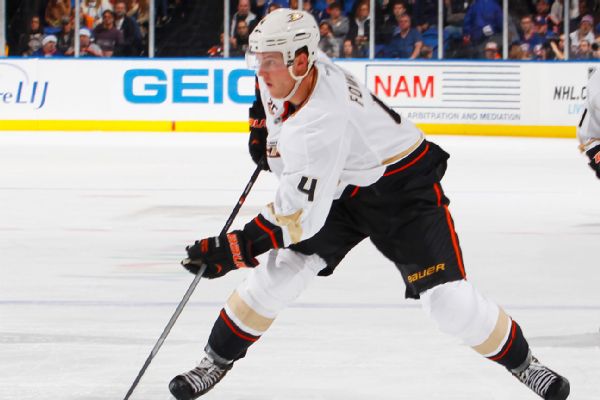 Anaheim Ducks defenseman Cam Fowler was helped off the ice and to the locker room Tuesday night with a right leg injury after a third-period collision with Calgary Flames captain Mark Giordano.

Fowler had just let go of a shot coming down the slot and still had his right leg off the ice when it appeared Giordano's check caught Fowler on or near his knee.

Fowler, the Ducks' leader in ice time among defensemen, was down on the ice in obvious pain before being helped off, not putting any weight on the leg.

Anaheim coach Randy Carlyle would say only that Fowler sustained a lower-body injury.

"I think our legs collided," Giordano said. "I hope he's OK. You don't like to see guys get hurt. There was no intent to hurt him there."

The Ducks' bench and Anaheim fans were not happy that Giordano was not called for a penalty on the play. That led to tempers boiling over a short time later.

Seconds after Chris Wagner scored to boost the Ducks' lead to 3-1 at 6:43 of the third period, Anaheim's Josh Manson went after Giordano and both were sent off with five-minute fighting majors.

"I think there's a lot of hate there," Manson said. "Our guys had to do something. Hockey is a fast game, and things happen. It's unfortunate. Hopefully Cam is all right, but it's tough."

Just 39 seconds after that fight, Ducks and Flames players got into another scrum, sending four more players to the penalty box, including Calgary'sMicheal Ferlandwith four minutes for roughing and a 10-minute misconduct.

Anaheim's Corey Perry and Calgary'sDeryk Engellandfollowed that less than a minute later by squaring off, each earninga roughing penalty.

With Fowler out injured and other bodies in the penalty box, Ducks center Ryan Getzlaf was forced to play defense, until he found himself in the overcrowded penalty box for tripping.

Things settled down for a short time, but with 3:01 remaining, Calgary's Matt Bartkowski and Anaheim's Korbinian Holzer dropped the gloves and got five-minute fighting majors, while the Flames' Michael Frolik and Ducks' Ryan Kesler exchanged slashes.

As the result of those battles, referees handed out 10-minute misconduct penalties to Bartkowski, Frolik, Kesler, and Engelland, who had also gotten involved.

Even after the final seconds of Anaheim's 3-1 victory ticked off, several players tussled and had to be separated before finally heading to their dressing rooms.

The Ducks and Flames, who combined for 106 penalty minutes in the game, are currently lined up for a first-round matchup when the Stanley Cup playoffs get underway next week.

Wagner summed up the feeling of his teammates and the ensuing on-ice battles.

"You hate see [Fowler] get hurt like that, and you've got to stick up for your teammates," Wagner said. "Our group is plenty tough enough and able to handle a game like that.

"It was a great response. We just hope Cam is OK."