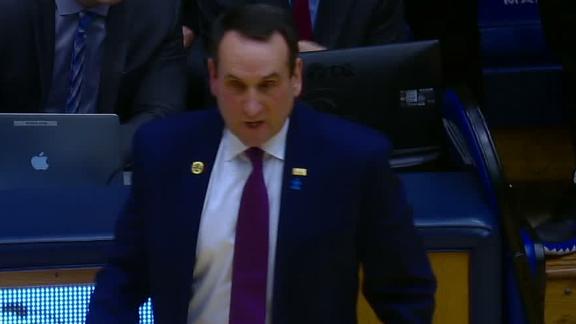 DURHAM, N.C. --Dukecoach Mike Krzyzewski said he "felt like crying" after returning to the sideline for the first time in nearly a month on Saturday, when he led the Blue Devils to a 72-64 victory over Pittsburgh.

Krzyzewski had back surgery on Jan. 6 and missed seven straight games while recovering. He said he wore a back brace during the game as a reminder to take it easy.

"You forget how lucky you are until something gets taken away from you," Krzyzewski said. "And I've been so damn lucky to be in this conference, to be at this great school, to have kids like this. I'm going to be 70 years old in a week or so, and I still get this? Thank God."

Krzyzewski tried to keep things as close to normal as possible for his team. Grayson Allen said Krzyzewski matter-of-factly revealed in a team meeting that he'd return for the Pitt game as just another bullet point he covered.

The Blue Devils went 4-3 during his absence, led by associate head coach Jeff Capel. Krzyzewski said the team got tougher while he was gone, after their 84-82 loss to NC State.

Krzyzewski took exception to a report on ESPN.com about his team being kicked out of the locker room. He said it was part of team-building, that it "wasn't about punishment, it was about getting rid of bad habits."

"We're in such a line-item society, a Twitter world, so when one thing happens, that's the story," Krzyzewski said. "It's a good thing leaders don't lead that way. I hope they don't -- I know one uses Twitter a lot."

Krzyzewski didn't show much emotion before the game, as he walked to the Duke bench with an ovation from the Cameron Indoor Stadium crowd. But after the game, he walked to center court, waving to the crowd and making a bow-down motion to show his gratitude.

"Thousands of people have either emailed, texted, sent masses, prayers, books, but the main thing I think they sent was their love and their concern," Krzyzewski said. "So that old thing Maya Angelou said, it's not what you do that will be remembered or what you say, but how you make people feel. That is really in essence what we should be all about, so to thank all those people because they made me feel good."