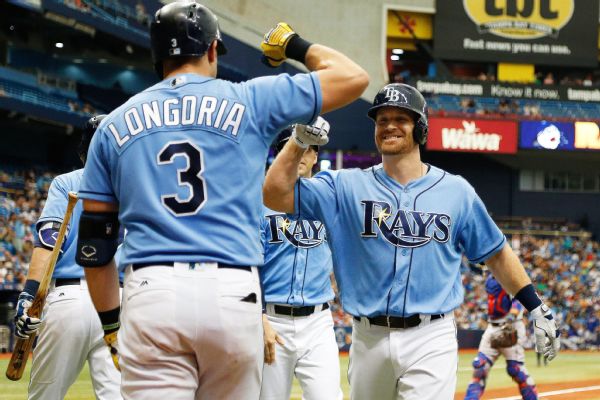 PORT CHARLOTTE, Fla. -- It was less than four weeks ago -- on the day Tampa Baytraded productive second basemanLogan Forsytheto the Los Angeles Dodgers-- that the Rays' highest-profile player, Evan Longoria, delivered a three-word review of the deal that raised many eyebrows in baseball:

By Saturday, the day the Rays' position players took the field for the first time in spring training, Longoria had softened his stance, but he still admitted that he is having a difficult time accepting the subtraction of Forsythe.

"I actually like where we are," Longoria said. "I don't know that I'll ever get over losing Logan, because we got real close and he became one of the clubhouse leaders. So when you take that away, it feels like there's a much bigger void."

Forsythe, who ranked sixth among American League second basemen in wins above replacement over the past two years, was traded to the Dodgers on Jan. 23 in exchange for highly touted pitching prospect Jose DeLeon. Longoria conceded Saturday that while he has come to like the makeup of his team, he is still trying to process how the pieces fit.

Asked if he now felt as if the Rays have a chance to win, Longoria replied: "I do. I do. It's just a different situation. There was so much shuffling. The loss of Logan can't be overlooked because it kind of casts a cloud. But at the same time, when you look at it in totality, I think that ... at the end of the day, we've bettered ourselves a little bit.

"You know, I can't say that we got much better, with losing Logan," Longoria continued. "But I think that if you take him away and then you insert the pieces that we have, I like it. I think that we've positioned ourselves to be right there again."

The Rays are coming off a last-place finish in the AL East, and their 94 losses were their most in a season in nine years. Over the winter, they traded away Forsythe and starting pitcher Drew Smylybut added outfielder Colby Rasmus, injured catcher Wilson Ramos and former Braves outfield prospect Mallex Smith.

FanGraphs recently projected the Rays to win 13 more games this season and finish 81-81. It's the second-biggest projected win jump in the AL (behind Minnesota's 16).

"It's always good to have some expectations of winning," Longoria said.

"But projections are what they are -- just guesses," he added. "I think those algorithms are based on everything going right for everybody. And as we all know, that doesn't happen very often. But it's about piecing it together. And if everybody has the year that they're expected to have on our team and we stay healthy, I really like our chances."

But he still changed his workout program over the winter, dropping offseason yoga workouts in favor of Pilates, saying he had taken that advice from Chicago Cubs pitcher Jake Arrieta.

The one thing Longoria learned from all those Pilates classes: "Women are so much better at Pilates than men," he said. "These older women in [his class] make me look like I'm just a child."

"I started growing it in November," he said. "And it just kept growing. And my wife likes it.