Experience wins out as Ducks outlast upstart Oilers in Game 7 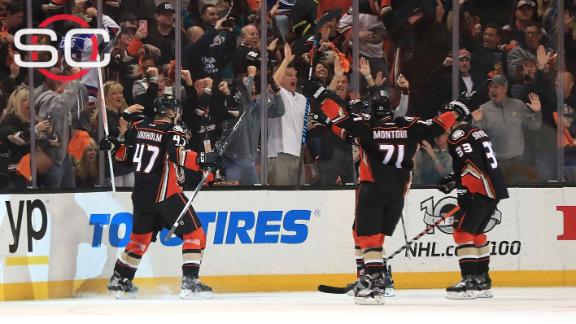 ANAHEIM, Calif. -- After sustaining a 7-1 drubbing in Game 6 that ensured this second-round best-of-seven series would go the distance, the Anaheim Ducks showed veteran poise to take Game 7 over the Edmonton Oilers 2-1 Wednesday night to move on to the Western Conference finals.

After losing four straight Game 7s at home, the Ducks got off to an ignominious start at Honda Center when the Oilers' Drake Caggiula opened the scoring 3:31 into the game. But Anaheim mostly controlled the puck and the pace after the first intermission, besting the inexperienced Oilers.

How it happened: With the Oilers leading after 20 minutes, it appeared that Edmonton goaltender Cam Talbot might steal one. Talbot made a number of big second-period stops, first in close on Nick Ritchie at the end of a Ducks power play, and then a glove save on Josh Manson 7:23 into the period. But the Ducks would eventually get one by him when Andrew Cogliano tied the score 8:55 into the middle period. That goal occurred during a dominant Ducks stretch lasting almost nine minutes in which they outshot the Oilers 10-0. That dominance continued into the third when Ritchie took a feed from Sami Vatanen and scored the eventual series winner 3:21 into the final period. The Anaheim defense clamped down from there, effectively shutting down Edmonton's superstar captain Connor McDavid, who finished the game with only one shot.

Controversy: Just 5:49 into the game, an errant Oilers' clearing attempt ended up onCam Fowler's stick at the blueline. The Ducks' defenseman beat Talbot with a wrist shot sending Anaheim fans into a frenzy. But officials had ruled the play offside before the shot, nullifying the goal and drawing considerable wrath from Fowler and the partisan crowd. A replay from the camera embedded rinkside confirmed the puck had barely crossed the blue line. But that replay was never shown in Honda Center, leaving Ducks fans muttering for the remainder of the first period.

What's next: The Ducks will host Game 1 of the Western Conference finals on Friday night against the Nashville Predators. It will be Anaheim's first trip to the conference finals since 2015 and its second appearance since winning the Stanley Cup in 2007.