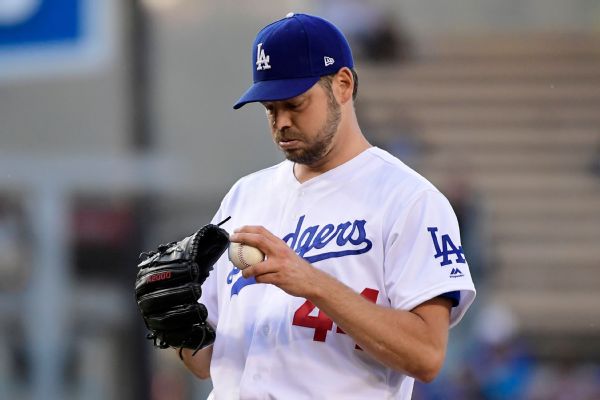 Free-agent pitcher Rich Hill and his wife were arrested and fined over an altercation with police at Saturday'sBuffalo Bills-New England Patriotsgame, Foxborough Police told The Boston Globe.

Caitlin Hill repeatedly tried to enter Gillette Stadium with an oversized bag, Foxborough Police chief administrator Robert Bolger told the newspaper. She was arrested on disorderly conduct and trespassing charges after she refused to leave the area when ordered by police.

Rich Hill was then arrested and charged with disorderly conduct and resisting arrest after he tried to stop police from putting Caitlin Hill into a police vehicle.

"He saw her as they were trying to get her into a van to bring to the police station, and he started to interfere with the officers," Bolger told the Globe. "He was told several times to back up and he would not. And he ended up getting arrested."

"Despite Saturday's events, my great respect for law enforcement remains unchanged," Hill said. "However, seeing my wife handcuffed for a problem that started because of her fanny pack was extremely difficult for me to witness. This was all overblown and we are glad to have it behind us."

Rich Hill, 39, is currently a free agent after spending the past three-plus seasons with the Los Angeles Dodgers and reaching the World Series in 2017 and 2018. He worked his way back three times from an arm injury and two knee injuries to finish the 2019 season.