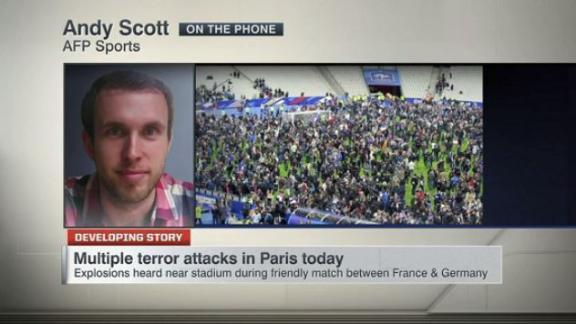 At least three people died outside Stade de France during France's match against Germany on Friday as the country dealt with a series of unprecedented terrorist attacks on Paris.

Two loud explosions were heard about 15 minutes into the match, and French President Francois Hollande was evacuated from the stadium.

A police union official says the explosions were from two suicide attacks and a bombing. The official, Gregory Goupil of the Alliance Police Nationale, whose region includes the area of the stadium, said the explosions went off simultaneously, near two of the entrances and a McDonald's restaurant. He did not provide more details.

The explosions were part of a series of terror attacks, the deadliest to hit Paris since World War II. At least 127 people were killed in multiple acts of violence, including shootings at restaurants and a hostage-taking at a music venue that left what one official described as "carnage" inside the building, as the attackers had tossed explosives at the hostages.

Authorities said eight attackers died, seven in suicide bombings, a new terror tactic in France. Police said they shot and killed the other assailant.French anti-terror police worked to identify potential accomplices to the attackers, and prosecutor's office spokeswoman Agnes Thibault-Lecuivre said authorities couldn't rule out the possibility that other militants involved in the attack remained at large.

"Those that think they can terrorize people in France or the values that they stand for are wrong," President Barack Obama said in comments late Friday afternoon from the White House.

The NBA, which had a full schedule Friday night, sent a statement to teams saying they should be on increased alert.

"In light of the ongoing hostage situation in Paris, all arenas should be on heightened alert and engage law enforcement for intelligence or support," the statement said. "We do not have reason to believe the events in Paris are related to NBA, however, we cannot be too careful in ensuring we are taking proactive measures."

Moments of silence were held throughout the league.

In another statement, NFL spokesman Brian McCarthy said of the league's security measures ahead of a full schedule of games Sunday: "Security at our games is always at a heightened state of alert."

After the match in Paris, a friendly that France won 2-0, supporters were gradually allowed to leave Stade de France in small groups. In addition, thousands of fans waited on the pitch at the end of the game as reports of the violence flowed in.

A stadium announcer told fans after the match to avoid certain exits "due to events outside," without elaborating. The announcement prompted some panic, but later, the crowds just walked around dazed, people hugging each other and looking at their phones for the latest news on the violence. All postgame interviews with players were canceled.

French Football Federation president Noel Le Graet said the players were informed about the attacks following the conclusion of the game.

"At halftime we said nothing because we didn't want the public to be disturbed or to create panic in the crowd," he said. "At the end of the match, I informed the players like I'm informing you."

Earlier in the day, the German team had to evacuate its hotel because of a bomb threat, but police found no explosive devices. The team remained in the stadium after the game.

"We're all shaken and shocked,'' Germany coach Joachim Loew said. "For me personally, the game and the sport loses importance. We're at a loss. We don't know what to do.''

A spokesman for the French Football Federation told Reuters that Tuesday's match between France and England will be played as scheduled.

"As we speak the game is on, yes," the spokesman said.

Having been evacuated from the stadium Friday, Hollande immediately went to the Interior Ministry to follow the response to the attacks. He spoke on television in the hours following the game, calling the attacks "a horror," and later canceled his trip to the G-20 meeting in Turkey.

The United States national team played a World Cup qualifier Friday night at St. Louis' Busch Stadium against St. Vincent and the Grenadines. Police there said there was an extra layer of security for the match.

And the UFC said it had reviewed all safety protocols ahead of Saturday's event featuring Ronda Rousey and Holly Holm at Etihad Stadium in Australia.

"We have been advised by Australia's Victoria Police there is nothing to suggest that tomorrow's event will in any way be impacted by the events in France, and it is important to note that precautions are being taken to ensure a safe and enjoyable experience for all in attendance," the UFC and Etihad Stadium said in a joint statement.

U.S. Homeland Security Department officials monitoring the attacks in Paris said there is no known, credible threat against the United States.

U.S. Secretary of State John Kerry described the attacks in Paris as "heinous, evil'' and "vile,'' calling them "an assault on our common humanity.'' Kerry says the U.S. embassy in Paris is "making every effort to account for the welfare of American citizens in the city.''

The attack comes as France has heightened security measures ahead of a major global climate conference that starts in two weeks, out of fear of violent protests and potential terrorist attacks.

France has been on edge since deadly attacks by Islamic extremists in January on satirical newspaper Charlie Hebdo and a kosher grocery that left 20 dead, including the three attackers. A restaurant targeted Friday, Le Carillon, is in the same general neighborhood as the Charlie Hebdo offices. The country has seen several smaller-scale attacks or attempts since, including an incident on a high-speed train in August in which American travelers thwarted a heavily armed Islamic radical trying to attack passengers.

Paris mourned the victims of the latest attacks Friday night.

In New York, Gov. Andrew Cuomo says the One World Trade Center spire will be lit blue, white and red in honor of the many killed.

Terror attacks put Paris into lockdown
AFP reporter Andy Scott describes the surreal scene at the Stade de France, where the France-Germany game continued despite a terrorist bombing outside, and the eerie quiet that later overtook the city.

Explosions heard during France, Germany match
Two loud explosions were heard outside the ground during the first half.

Parisians shaken again by terror
Financial Times writer Simon Kuper talks from the Stade de France, where he was covering the France-Germany game, about the mindset of Parisians following another major terror attack.