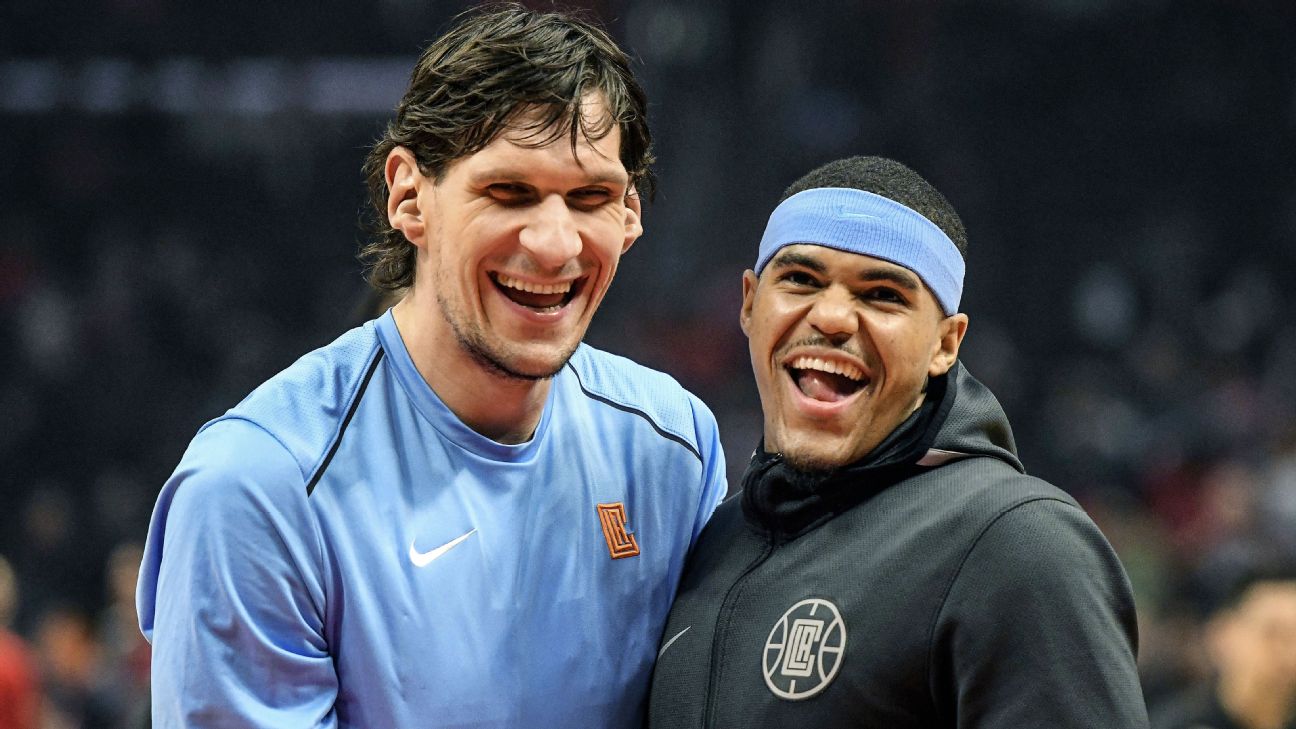 PHILADELPHIA -- Over the course of three years, two trades and 765 minutes together on the court, Tobias Harris and Boban Marjanovic forged the NBA's most enduring friendship.

"We don't have a relationship no more," Harris said. "He's replaced me with Luka Doncic."

After a moment, his face broke into a grin, followed by a laugh.

"The Bobi & Tobi Show" makes a special one-night return engagement Friday when the Dallas Mavericks visit the Philadelphia 76ers (ESPN and the ESPN App, 8 p.m. ET). It will be their first game since Marjanovic signed with the Mavericks in July and the first game for Harris and Marjanovic as opponents since March 2016.

In between, they played for the Detroit Pistons together, were traded together to the LA Clippers and then were traded again to the Sixers. And while the two are separated by more than 1,000 miles these days, the friendship that formed between them during their three seasons together as teammates on three different teams remains as strong as ever.

"Of course," Marjanovic said. "We may not be on the same team, but friends stay friends forever."

Both men said they still text and talk regularly, checking in on how each is doing. Harris said he tries to keep Marjanovic's spirits up as his playing time fluctuates under coach Rick Carlisle. The 7-foot-4 reserve has played in just 11 of the Mavericks' 27 games after signing a two-year, $7 million contract this summer.

Meanwhile, Marjanovic monitors how Harris is playing in Philadelphia, where the 76ers have championship aspirations but enter Friday's game in fifth place in the Eastern Conference.

It's a new dynamic for the duo, who came together in the summer of 2016 when Marjanovic joined the Pistons on a three-year, $20 million deal in free agency. Harris had been traded to Detroit five months earlier, his third stop in his first five NBA seasons.

The two were friendly during their year-plus together in Detroit, but things changed forever for them when the Pistons included them in a trade with the Clippers as part of a package to acquire Blake Griffin in January 2017.

"I had family, he had his family, [so] you'd finish practice and go home," Marjanovic said of their friendship in Detroit. "But after we got traded, we became super good friends.

"We only had each other at the time. ... We didn't have anybody else, and it worked for us."

While playing in the world's entertainment capital, Harris and Marjanovic decided to do what so many friends living in Los Angeles try to: make their own television show.

They ended up shooting three episodes of an internet series about their lives together in Los Angeles. The show was an instant hit with their fans and teammates.

"People really loved it," Harris said. "We liked it too. We liked that [other people] liked it."

"I thought it was pretty cool," saidMike Scott, who signed with the Clippers as a free agent in the summer of 2018 and instantly saw how close Harris and Marjanovic were. "Something pretty dope to do off the court."

The show was quintessentially Los Angeles. Marjanovic and Harris first spent time at a SoulCycle studio, where Marjanovic led a class, before shifting to a dance studio, where the two learned choreographed dance moves together.

The time together created a bond that went beyond clowning around and running pick-and-rolls.

"Once they were in the building, [their friendship] wasn't a fake thing," Clippers coach Doc Rivers said. "It was a real thing."

When the two were traded to Philadelphia in February, their partnership was strengthened. After playing just 215 minutes together during their first two seasons as teammates, they shared 550 minutes of court time in 2018-19, including their first playoff action with the 76ers. WithJoel Embiidsidelined for Game 3 of their first-round series against theBrooklyn Nets, Harris put up 29 points and a game-high 16 rebounds; Marjanovic added 14 and eight.

Little did they know that a month later Kawhi Leonard's shot that bounced in to win Game 7 of the conference semifinals -- the only 76ers game in the 2019 playoffs in which Marjanovic didn't play -- would end their time together. When Marjanovic signed with the Mavericks on July 23, it officially put the "Bobi & Tobi Show" on hiatus. But Harris insists it's not canceled just yet.

"Boban knows he's nothing without me, and I'm nothing without him," Harris said with a laugh. "But hopefully in the summer we can hopefully do something where we can do some content together. The hope is to bring it back."

Before they do, they'll meet as opponents for the first time in 1,388 days. In advance of the Mavs' trip to Philadelphia, where the 76ers are 14-1 this season, the two discussed more important things than basketball.

"He just called me and wanted to know if we were doing dinner," Harris said with a smile. "I paused for a second, and he just starts yelling, 'No, you are doing dinner!'

Typically, Harris -- the foodie of the two -- will make the choice on where they eat. In this case, though, he deferred to Marjanovic, who picked his favorite spot in Philadelphia: Zahav, a trendy Israeli restaurant.

"He used to go there, like, every day," Harris said.

That preference for consistency might have stemmed from one particular outing in which Harris' dining choice unintentionally led Marjanovic astray.

"I took him somewhere and he got this octopus," Harris said, "and he starts eating it. And, like, 30 seconds later, he is like, 'I'm going to the bathroom.'

"He goes in there, throws up this octopus, comes back and goes, 'It's time for me to go.' ... He was so mad. He kept saying, 'You made me freaking eat this octopus.'"

These moments sound familiar to anyone with longtime friends. In this case, they also underscore how the two men have had to adjust to the strangeness of being apart and no longer seeing each other every day.

"Yeah, it was a little weird," Harris said. "That's my bro, so it was always good when we were together to play together, and obviously the friendship off the court."

"He's a nice guy, and he's a good friend," Marjanovic said. "Nothing [else] changes. I changed cities, he stayed in the same one, but the friendship stays. I'm so happy for him." 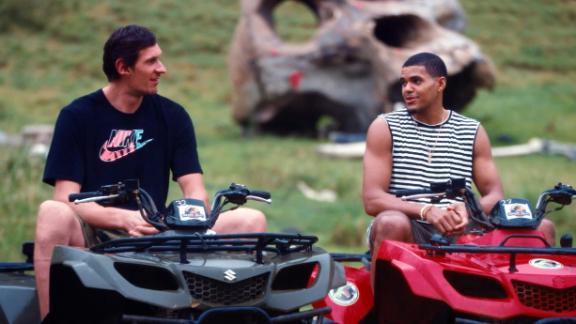