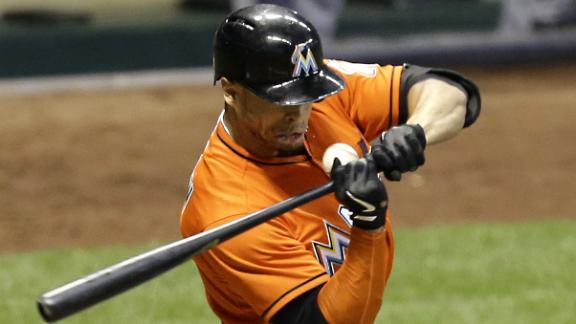 MIAMI -- Giancarlo Stanton of the Miami Marlins says he's feeling "much better," one day after sustaining facial fractures and other injuries when he was struck in the face by an 88 mph pitch.

Stanton took to Twitter on Friday to update his followers on his condition.

The amount of support I have received from you guys has been tremendous & Heartfelt. I'm much better today & deeply appreciate your prayers!

- Giancarlo Stanton (@Giancarlo818) September 12, 2014Among the front-runners for the NL MVP award, Stanton's season likely ended Thursday night after he was hit by a pitch from Milwaukee's Mike Fiers.

Stanton immediately fell to the ground after being hit. Trainers from both teams came to his assistance, and he was placed on a backboard and then a stretcher. The grounds crew even had to use scrapers to remove the blood from the batter's box before play resumed.

Marlins manager Mike Redmond gave an update on Stanton's status before Friday's 3-1 10-inning loss to the Philadelphia Phillies at Citizens Bank Park. He said Stanton was being evaluated by the team doctors in Miami on Friday and is also scheduled to visit a dentist.

"He's feeling better and he's on the road to recovery," said Redmond, who reiterated that it's likely Stanton will not return this season. Miami (71-74) has 17 games remaining.

"From the information I have, it looks like it's all stuff that's going to heal up and he's going to be fine," Redmond said. "It really becomes more of a mental thing now -- how he's going to feel when he steps in the box once he recovers. I wish he didn't have to go out like that. It would be nice if he could play a few more games and get that feeling back instead of having to sit on it for the offseason. But that's the way it goes."

Several Marlins players said they swapped text messages with Stanton on Friday and were encouraged by his upbeat mood. Reliever A.J. Ramos, Stanton's roommate and best friend on the team, corresponded with Stanton after the team arrived in Philadelphia from Milwaukee at 4:30 a.m. Friday.

"That kind of put my mind at ease,'' Ramos said. "We were joking around about how his face looks, and that helped me fall asleep a little better. He was in good spirits on his way to Miami. It was definitely reassuring. We were texting just like everything was normal. It felt good to know he was all right.''

Stanton leads the majors with 105 RBIs and leads the National League with 37 home runs this season.

Information from ESPN.com's Jerry Crasnick and The Associated Press contributed to this report.