Have the Los Angeles Kings arrived ahead of schedule? 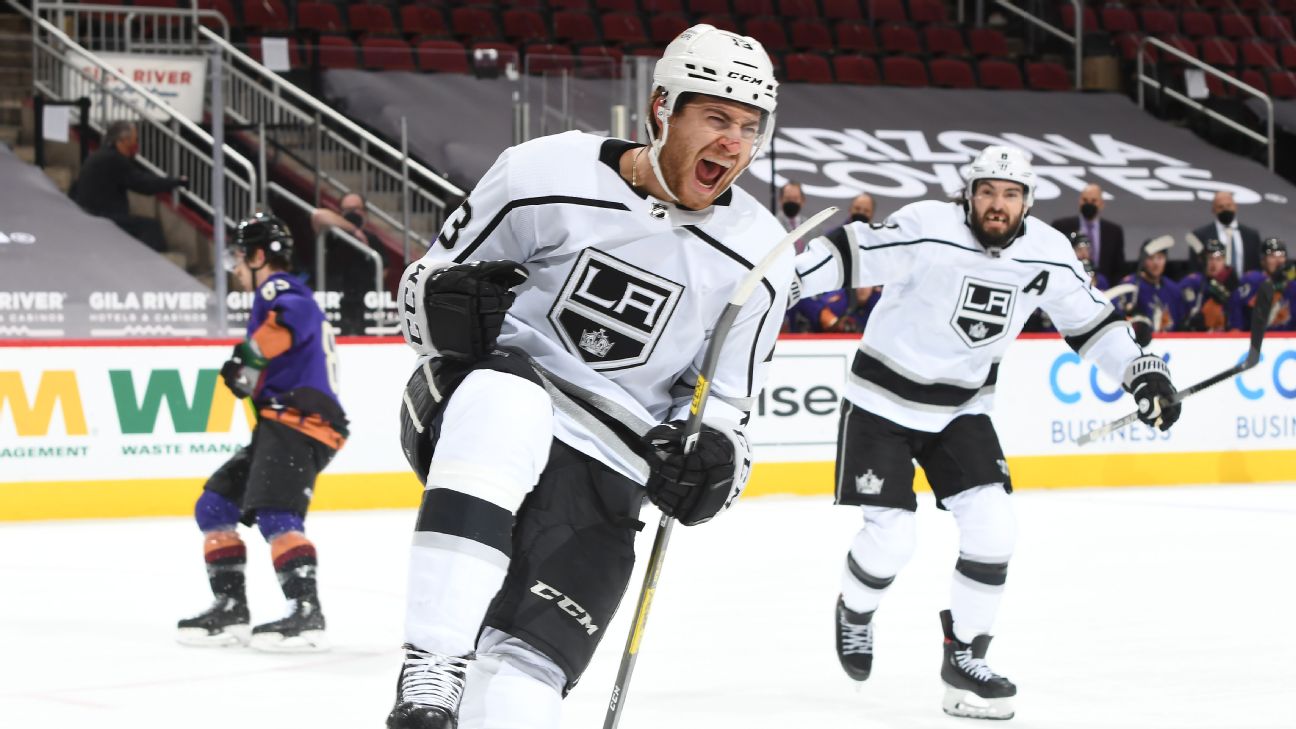 Jeff Carter doesn't need to sugarcoat it. The past two seasons were hard on the Los Angeles Kings, especially around the trade deadline. A team that won the Stanley Cup in 2012 and 2014 suddenly found itself in rebuild mode, and began moving players who were critical to those championships.

"I mean it sucks, to be completely honest with you," Carter said. "Those are guys we had won with, have great relationships with still to this day. It's not easy to see guys move. It's definitely not easy for a team that has won before, seeing the direction that it's going."


GM Rob Blake knew it was taking a toll on the roster. But it was an essential part of the plan.

"[The players] are not expected to understand two or three years out. They want to play, and they want to win the next game," Blake said. "When you remove a [Tyler] Toffoli, a [Alec] Martinez, a [Jake] Muzzin, these are real good players who helped them win Stanley Cups. When they're moved out of the dressing room to help another team, our guys need to understand what is going on. And a lot of times they don't want to accept it right away, and don't see it, but that's what they're supposed to do. They're supposed to want to win every night."

The carnage, it seems, is over. After two taxing seasons -- between 2018-19 and 2019-20, the Kings posted a .444 points percentage, trailing only the Detroit Red Wings and Ottawa Senators for worst in the league -- the dust has settled. Los Angeles has amassed the league's best prospect pool, according to Chris Peters' preseason rankings, And many of those young players have stepped into big roles. Elite Prospects lists the Kings as having the league's third-youngest roster this season. What's more, the Kings' championship core (which is down to Carter, Dustin Brown, Anze Kopitar, Drew Doughty and Jonathan Quick) is playing at a high level.

All of this leads to Blake singing a different tune heading into next month's trade deadline.

"I think we're in a spot where we want to try to improve our team the best we can in any situation," Blake said. "And maybe not the look that we've had in the past -- where we were improving, but we were improving five years down the road, which wasn't much improvement to the players in the room. So I'm hoping we're competitive here for the next month and a half, stay in [the playoff hunt], and have a look at improving the team for the players. They will put themselves in that position."

So it begs two questions: Have the Kings turned the corner? And could they be a playoff team as soon as this season?

Twenty-one games into the season, the Kings have 22 points, which is just seven points back from the West Division-leadingVegas Golden Knights, and just three points shy of the Colorado Avalanche and Minnesota Wild, who hold the third and fourth place spots.

"It's pretty wild, actually," Carter said. "The start of the year, you looked at our division, you figured Colorado, Vegas, St. Louis were shoo-ins and there was one spot left open. But there's a group of teams that have pushed a little bit, so I feel like it's going to be tight the whole way through."

The integration of the young and old has been the story of the Kings' season:

Blake also singled out 21-year-old center Jaret Anderson-Dolan, who began on the taxi squad, got an opportunity, then put up three goals in his first six games.

"Anderson-Dolan, Vilardi, Anderson, they're all 2017 draft picks," Blake said. "That's four years ago. That's what it really takes before you can really establish yourself in the NHL. For us, that's the blueprint. A lot of the draft picks and players we've acquired over the years have taken place since 2017. It takes time for these kids to mature, play in the American league and get in that experience. And then when they do step in, they're ready to help you win."

It also helps that those players are really good.

"Believe me, older players are the first to realize if a guy can play in the NHL or not," Blake said. "There are times we are going to try players, and they're not NHL players, and they're going to get a game or two because we're not deep enough yet. But when you actually bring in legitimate young players, the veterans are the first to see it. They know he's a real good player at 20, 21. And that gives them that extra excitement."

As for the newcomers? They want to uphold the tradition.

"They're all obviously accomplished veterans in the league, but they still want to win," Vilardi said. "So yeah, there is added pressure on the young guys to help them out."


Since the Kings were one of seven teams not to play in the 2020 postseason bubble, they went nine months without games. Blake believes that helped the veterans -- both "giving them time to reflect" and renewing the competitive spark, but also giving them time to heal. Carter, for example, had core muscle surgery in June.

"That time off definitely didn't hurt us," Carter said. "The whole group of us, as older guys, were able to take our time working back from things, rest up, and rest the mind a little bit."

Carter says he's also been re-invigorated by taking on a mentorship role. His linemate is Vilardi, who grew up a Flyers fan, and cited Daniel Briere and Carter as his favorite players as a kid.

"It's a respect thing," Vilardi said. "He's done so much in his career, I respect the s--- out of him. He's still super fast, he makes a lot of little plays out there that most people don't see. But he also does such a good job communicating, and if he says something to me, I'm listening."

Kopitar, the captain, is once again a Selke contender. ("Every night, every every night," Carter says. "It's pretty amazing to watch, especially for a guy of his size. Literally every night you know what you're getting with Kopi, controlling the game, he's always on.")

But perhaps the biggest glow up has been with Doughty. After a mediocre 2019-20 -- especially by his standards -- Doughty is starting to look like himself again.

"You know, Drew is the biggest competitor I've ever played with," Carter said. "He hates losing, and I think it wears on people differently. He really took that to heart the last couple years. He made a big effort this summer to use the extra time wisely. If you ask him, he has a lot of people who doubt his game now. And he's proving a lot of people wrong now."

Which leads to Doughty himself. When asked this week if the Kings could be a playoff team, the 31-year-old responded with his usual candor.

"I wouldn't say we're 100% going to make it or anything like that, we've got a lot of work to do. But I definitely could see us hopefully getting in the third or fourth slot there, that's our goal," Doughty said. "And if anyone doesn't think that we can potentially make the playoffs, what's the point of coming here every day? That's what we're playing for.