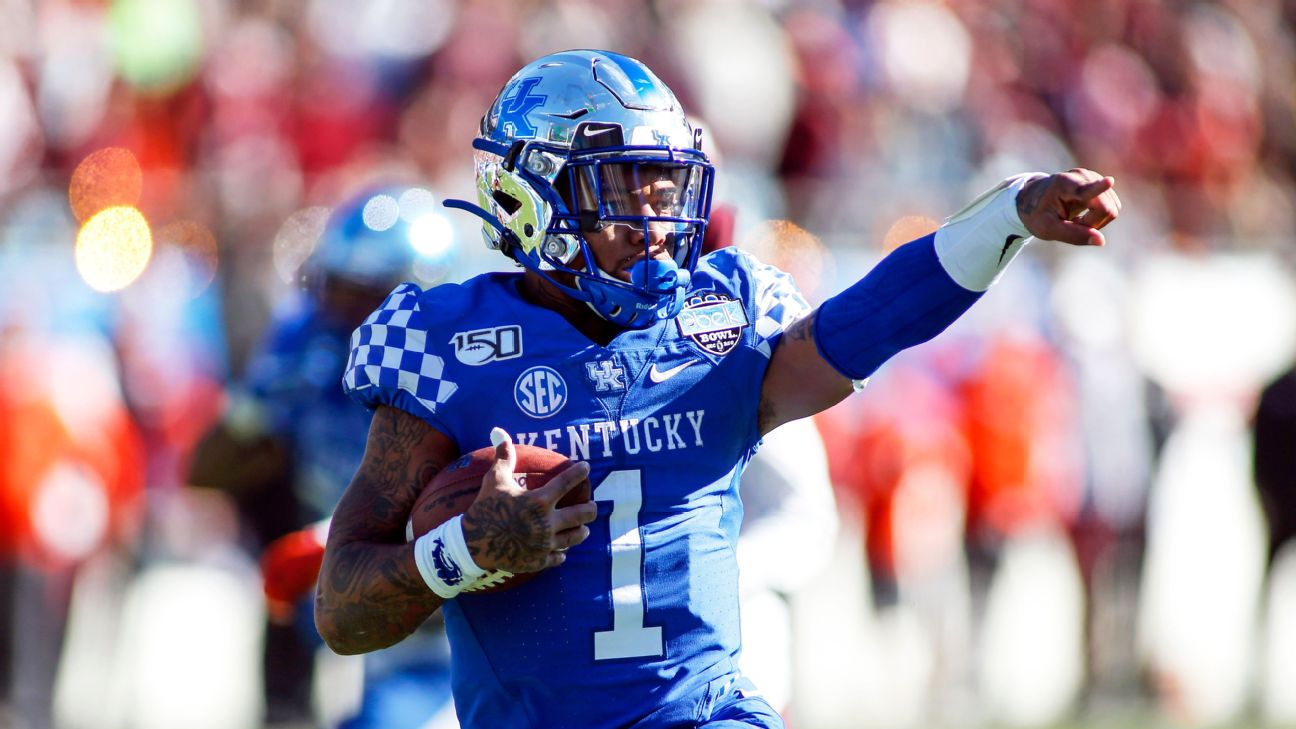 LEXINGTON, Ky. -- Lynn Bowden reaches into his pocket and fishes out a cellphone. Leaning back in a restaurant booth on a warm afternoon in early March, he scrolls and scrolls and scrolls until he finally finds the photo he's looking for. It's a screenshot of a text message he received at 9:06 a.m. on Sept. 29 -- the morning after Kentucky lost on the road at South Carolina.

The game in itself was a letdown as Kentucky fell to 0-3 in conference play. Bowden, a junior receiver, had only three catches for 18 yards. But with less than 7 minutes remaining and the score 24-0, something unexpected happened. A spark. Kentucky got the ball back and Bowden took over at quarterback -- not just for a snap but the entire possession -- and marched the offense 84 yards down the field for a touchdown.

The late position change barely made the recaps, but to anyone watching, it felt like a path forward for a team that was otherwise circling the drain. Which brings us back to the text message. It's from someone close to Bowden, he says. And, honestly, he believes they meant well at the time. But it touched a nerve. So while he's comfortable showing the message to a reporter, he doesn't want the author identified. He scribbles over the contact information just to be safe.

Bowden has read this countless times in the months since it was sent, but even now he shakes his head in disbelief. He didn't respond because he didn't know what to say. What this person didn't understand about the situation could make up a list as long as Bowden's throwing arm.

Most important, it was actually Bowden's decision to play quarterback. He'd been hounding coaches about it throughout the game, telling head coach Mark Stoops, "Let me go!"

How quickly people had forgotten his high school days, when he was a star dual-threat quarterback in Youngstown, Ohio. How easily they had forgotten that Kentucky recruited him to play Wildcat QB before moving him to receiver.

All Bowden ever wanted was the football in his hands. And on that day, with all hope lost, he was obsessed with one thing: winning. The long-term ramifications be damned.

At least that's where he and the messenger had something in common. Neither knew what changing positions would mean for Bowden's future -- that it would put him in a different light and turn him into one of the most interesting players to watch in the upcoming NFL draft, conjuring images of multidimensional pros like New Orleans Saints do-everything quarterback Taysom Hill.

Thinking back to that time of uncertainty, Bowden glances up at highlights of the NFL combine playing on a TV screen above his head and smiles.

"It's the best thing to ever happen to me," he says.

That touchdown drive against South Carolina had coaches thinking. It took only five plays and 2 minutes, but assistant coach Darin Hinshaw remembers watching Bowden at quarterback and saying to himself, "Hey, we've got something here."

But heading into a pivotal bye week -- the team one game below .500 and the season on the brink -- Stoops wasn't so sure about making it a permanent move. Terry Wilson, the Week 1 starter, was already out for the season, and backup Sawyer Smith was playing through a chipped bone in his wrist and a recently separated shoulder. But Smith was a gamer, bless his heart, and he would keep going out there and grinding if they let him.

During a Monday staff meeting, Stoops asked offensive coordinator Eddie Gran what he wanted to do. Going to Bowden would represent a sharp left turn. Because he wasn't a full-time QB, they'd have to scrap the existing offense and rely heavily on the run game.

"We're pulling our hair out," Stoops said. "What are we going to do here?"

A fellow Youngstown kid, Stoops loved Bowden. In addition to playing wide receiver and Wildcat QB, he was the main return man and was on the verge of becoming a rare two-way player, practicing at nickel cornerback until depth at quarterback became problematic.

What's more, Bowden, who entered the program an immature freshman, had become a leader on the team and was one of the most competitive guys Stoops had ever coached. "He's tough as nails," Stoops said.

But even so, Stoops needed to be sold when Gran said they should move Bowden to QB full time. Hinshaw laughed as he recalled Stoops popping his head into the offensive meeting room afterward and reiterating to himself as much as anyone else, "OK, we're moving Lynn to quarterback."

"Then he left and came back in, 'Are you guys sure? We still need to have a package with other quarterbacks besides him. We can't just do all him, right?'" Hinshaw said. The offensive staff reassured Stoops they'd be ready. "Then he came in a third time, 'Are you sure?'"

Practice wasn't exactly pretty as Bowden knocked the rust off his throwing motion. Hinshaw said there were a few times the staff wondered aloud whether they were idiots for trying this. But when the ball was in Bowden's hands, there was no denying it: He was a natural playmaker. You could tell he was easily the best athlete on the field, Hinshaw said.

But what stood out the most was just how quickly Bowden absorbed information. Remember, he hadn't played receiver at all until he got to college, and five months later he caught 17 passes for 210 yards and was named to the SEC all-freshman team. A year after that, he led Kentucky in receptions (67), receiving yards (745) and touchdown catches (five).

Thrust into the quarterback room for the first time, Bowden learned the playbook in leaps and bounds. Asked how long it took him to understand protections, he said, "I got it that week."

"You'd be remiss not to mention it in your article: The guy is unbelievably intelligent," Stoops said. "What he was able to do is not just an athlete back there taking snaps. The way he could set plays up, direct plays, motions, know where everybody is supposed to be, know all the motions and reads and things, it was truly remarkable."

In his first game at quarterback, Bowden threw for 78 yards, one touchdown and no interceptions, and ran for 196 yards and two scores as Kentucky beat Arkansas. Then, in rainstorms, he ran for 99 yards against one of the top defenses in the country in Georgia and topped the 200-yard rushing mark against Missouri.

Kentucky went 6-2 with Bowden behind center, and he wound up leading the SEC in rushing yards (1,468).

"How do I put this in a humble way?" Bowden said. "Some of these teams on defense are not as good as they think they are. They knew we were going to run the ball 50 times a game and there was only one game I was under 100 yards, and that game I had 99. So ..."

Not lacking confidence, he picked up the thread a moment later.

"If I would have started at quarterback, I feel like I might have won a Heisman," he continued. "The numbers would have been crazy. I played eight games [at quarterback] and had 1,500 yards. Imagine if I played an extra five."

The NFL was already interested in Bowden, but the position change put scouting departments on notice. Suddenly there were shades of former Kentucky great Randall Cobb to consider. Comparisons to the Saints' Hill became unavoidable. And if teams looked closely, they would have seen that Bowden was running many of the same read-option plays Lamar Jackson ran at Louisville and with the Baltimore Ravens.

In fact, Bowden started studying Jackson the moment he moved to quarterback. "Just to see how he moves, the way he runs, it was a beautiful thing," he said. He claims to have read only one mock draft, and coincidentally it had him going to the Ravens.

While no one is going to confuse Bowden's arm with that of Jackson's, he has proved himself to be effective at throwing a post or a go route. Thrust into action last season, he completed 35 of 74 passes for 403 yards and three touchdowns. And that's enough to keep defenses honest. Hill has attempted only 13 career passes in the NFL.

"The game nowadays is changing for the better," Bowden said, "especially for me because I can do anything on the field. The style of game, everyone is getting faster."

An injury kept him from performing at the combine, and the coronavirus pandemic ultimately shut down his chance at holding a pro day, but Bowden said he consistently runs in the 4.4-, 4.5-second range of the 40-yard dash. "Turn the game film on and it looks like I'm running a 4.3," he added.

Anyone who watched him last season would have a hard time disagreeing with that. The move to quarterback made him one of the most exciting players to watch in the SEC.

Hinshaw said he saw scouts who'd come to evaluate Bowden early in the season return to campus asking more questions. He thought the Georgia game in particular -- when he made two of the best safeties in the game look silly at times -- showed the NFL, "If we get the ball in his hands, he can make anyone miss."

"Is he going to be a full-time quarterback in the NFL?" Hinshaw said. "No, I don't think anyone is thinking that. But could they get in a Wildcat situation with him at quarterback? Yeah, I think they think that. Anything you can do to get an advantage in this sport, guys are looking at. And you can do that with him."

Personally, Bowden sees himself as a Deebo Samuel type -- primarily a wide receiver in addition to a threat to run the Wildcat. He wants to continue playing on special teams, too.

But where he goes and what position he plays isn't important. He's willing to line up at tight end if need be. He can even go in the trenches against the big boys, he said, and "get in someone's way."

He just wants the chance to show off his versatility.

As always, he's chomping at the bit to have the ball in his hands and make something happen.

"Every team I talked to wanted to use me in multiple ways," Bowden said. "Running back. Receiver. Some Wildcat quarterback. Punt return.

"My mindset is I'm coming to take someone's job. And my first year there, not three years down the line." 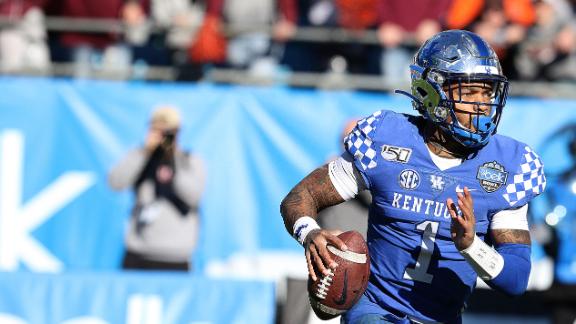