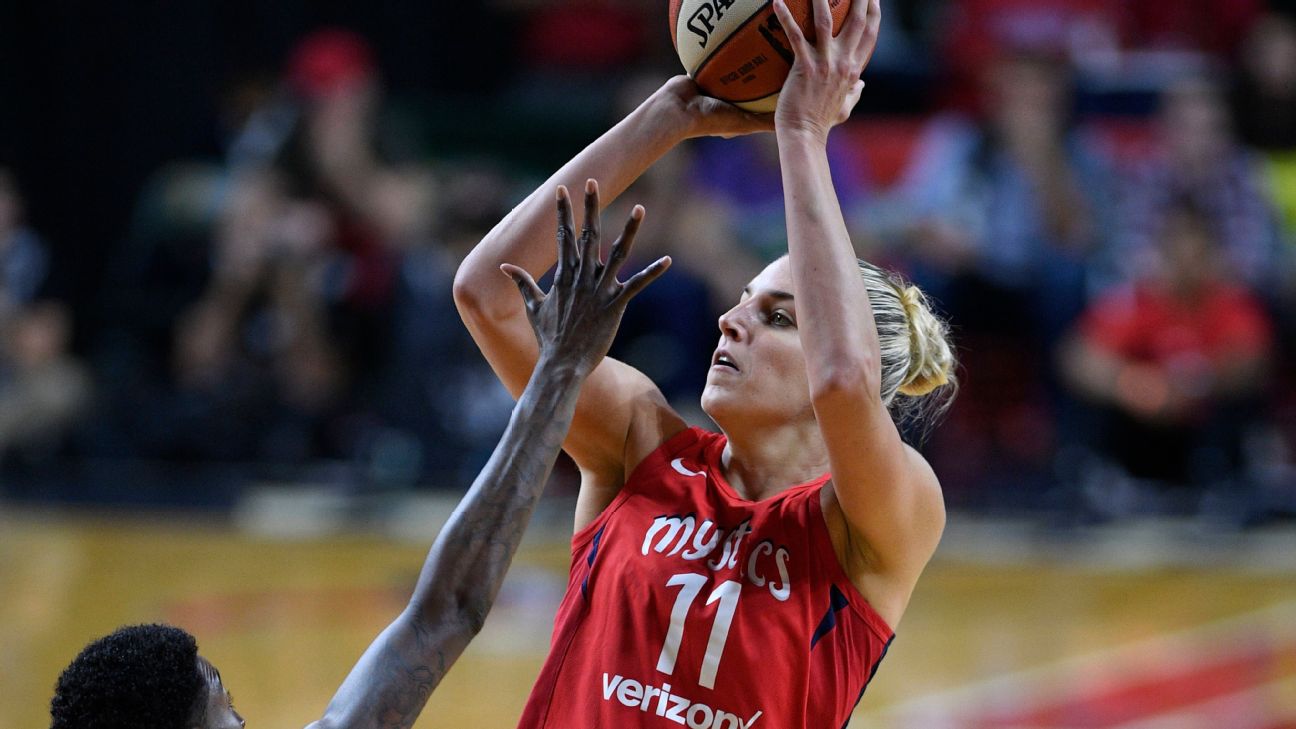 When last we saw Elena Delle Donne on court, the two-time WNBA MVP had led the Washington Mystics to the 2019 championship, despite three bulging discs in her back.

She hasn't played since, undergoing two back surgeries and sitting out the 2020 season in the WNBA bubble.


But as the WNBA resumed play Sunday after a monthlong break for the Olympics, Delle Donne might also soon be making her return to the league. She has been practicing with the Mystics, and while there is no precise timetable for her to play, Delle Donne is hopeful her return is imminent.

With the playoff race for the 2021 WNBA season starting to come into focus, the timing couldn't be better for the Mystics. Each team has between nine and 12 games left on the schedule over the next four-plus weeks before the regular season concludes Sept. 19.

The top eight teams in the WNBA standings advance to the playoffs. The Las Vegas Aces (17-6) sit in first place, with the Connecticut Sun (16-6) and the Seattle Storm (16-7) not far behind. But after the fourth-place Minnesota Lynx (13-8), another half dozen teams are vying for a spot in the postseason. Washington (8-12) -- which hosts defending champion Seattle on Sunday (3 p.m. ET, ESPN) -- is currently one-half game behind the Dallas Wings for the final playoff spot.

What should we might expect from Delle Donne when she returns to the Mystics and how will it affect their playoff potential? Our panel -- ESPN's Kelly Cohen, Dana Lee, Kevin Pelton and Mechelle Voepel -- tackles both questions, and examines whether the Lynx, who had won eight consecutive games before losing on the road at Connecticut on Tuesday, have become a championship contender. We also take a closer look at the front-runners, and which teams in the bottom half of the standings are the biggest threat for a playoff push.

When she returns, how do you expect Elena Delle Donne to affect Washington? How far can the Mystics go with (or without) her? How does Myisha Hines-Allen's return also influence your answer?

Kevin Pelton: It's tough to know what to expect from Delle Donne more than 22 months after her last WNBA game, the clinching Game 5 of the 2019 WNBA Finals. I don't think MVP-caliber play is realistic right away. As a result, I'd be surprised if the Mystics were able to get through the single-elimination gantlet this year.

Dana Lee: Despite her absence this season, Delle Donne has remained part of the conversation because of the type of player she's expected to be when she comes back. Like Kevin, I'm more cautious because of the number of unknowns. What type of minute limitations will there be? How will Delle Donne respond to game speed after being away for so long? What effect will Delle Donne's return have on Tina Charles, who just recorded her ninth 30-point game of the season? How far the Mystics can go will depend on how successfully they navigate all of the above.

Mechelle Voepel: Mystics coach Mike Thibault said that Delle Donne being back in practice brings moments when she will do something, and everyone will say, "Oh, yeah, that's the MVP we know." But as Kevin and Dana said, we just don't know how much she can play at that level, and neither does Delle Donne. It's obvious her hunger to play is there. And even a 75% Delle Donne is dangerous and takes up opponents' defensive energy. Charles has been carrying the Mystics. But with Hines-Allen now back and the hope that Delle Donne follows, maybe we'll see something closer this season to the Washington team Thibault envisioned when Charles was first traded to the Mystics in April 2020.

Kelly Cohen: As someone who became a WNBA fan through living in Washington, and seeing the Mystics play in person for the first time a few years ago, I have been eagerly anticipating Delle Donne's return. Even though she hasn't played since October 2019, she remains the leader of the team. A former MVP is still going to be a positive addition to a team, even if she is playing restricted minutes or has some kinks to work through. Her return would signal a big change for the Mystics, who despite losing their first two games out of the Olympic break put up a strong fight against a very good Aces team.

Provided Delle Donne and Charles can successfully mesh, and everyone else like Hines-Allen and Natasha Cloud stay healthy, I think the Mystics will now be able to push for a playoff spot.

Have the Lynx played their way into being a championship contender, or are Seattle, Las Vegas and Connecticut still the front-runners?

Pelton: The NBA rule of thumb is that a 5% chance of winning the title separates contenders from pretenders, and I think the Lynx clear that bar. (They win the championship in about 8% of my simulations of the rest of the season.) While those other teams have a much better chance of getting the double-bye, Minnesota has a chance to pull a rare semifinals upset -- particularly if the Lynx get Aerial Powers back from thumb surgery for the postseason.

Lee: Calling the Lynx a championship contender still feels a very thin limb to go out on, especially after a 12-point loss against the Sun. But could they potentially pull off an upset late in the playoffs? Sure. Fowles has been dynamic all season, leading the league in field goal percentage. Part of the Lynx's 0-4 start in May was due to various players' overseas commitments and injuries, but since then, they have won 13 of their last 17 games and have settled in nicely.

Voepel: The Lynx saw the best of Connecticut's shutdown defense in Tuesday's 72-60 loss, so let's see how they deal with it in the rematch Thursday. It helps to have Natalie Achonwa back for post depth (she had last played June 12 before returning Sunday), and as Kevin said, Powers would be a big lift. But to win a championship, you must have at least one take-over superstar. Sylvia Fowles has been that player and still can be. Napheesa Collier might be that in the future, but isn't there yet consistently.

So, yes, the Storm, Aces and Sun are separate from the pack. After two losses without Breanna Stewart and Sue Bird, Seattle is in third place by a half-game. Guard Jewell Loyd had a combined 61 points in those two defeats and almost willed the Storm to victories in both. There's plenty of time to win their way back into one of the top two spots and the double-bye into the semifinals, but the Storm can't afford too many more stumbles in their last nine games.

The Sun, who have won four in a row, are without Alyssa Thomas this season, but having Jasmine Jones back obviously makes a huge difference.

As for the first-place Aces, A'ja Wilson is having another brilliant season as she looks to possibly repeat as MVP. Kelsey Plum -- who won 3x3 Olympic gold with fellow Aces guard Jackie Young -- is coming off her second-highest point total (24) of the season Tuesday. Chelsea Gray, who won 5-on-5 gold with Wilson for Team USA, is often at her best in crunch time. Liz Cambage, who said she feels rejuvenated after sitting out the Olympics, is a major force offensively and defensively. If that's the case the rest of this season, it's the best possible scenario for the Aces.

Cohen: At the Olympic break, I sang the Lynx's praises. My critique was about Minnesota's defense, which is not to be downplayed but is obviously something that can be fixed. In the first two games back from the break, the Lynx held the Liberty to 78 points in a win, and the Sun to 72 points -- which would have been a good stat except that the Lynx scored 60 points. Turning defensive struggles around is a good thing, but not when your offense doesn't step up -- and that is something to watch in the next few games. Still, because the Lynx started the season so poorly but turned it around in such powerful fashion, they could make a run in the playoffs. The consistency they showed during the eight-game winning streak, including two wins over Las Vegas, makes me think they can compete with teams like the Aces and the Storm in the postseason.

That said, the Aces' chemistry and depth are overwhelming. Wilson and Cambage work as well together as any duo in the league. Young is playing great at both ends. And Gray is still slinging the ball in wildly impressive ways. The only thing I'm worried about with the front-runners is how they stay motivated for the rest of the season to keep winning and to keep from peaking before the playoffs.

Just 3 games separate five teams in the second half of the WNBA standings. Which team -- New York, Washington, Dallas, Los Angeles or Atlanta -- has the biggest potential to make a playoff push?

Cohen: Before the Olympic break, I tabbed the Wings as the best surprise of the season so far and was excited for what they could accomplish in the second half of the season. In addition to the obvious star in Arike Ogunbowale, Dallas has had amazing play from Marina Mabrey (my MIP in 2021), Allisha Gray and Satou Sabally, though I'm worried about her Achilles injury and how much time she might miss. The Wings are entertaining to watch, full of youthful enthusiasm and seem ready to make a playoff push.

Pelton: Despite my answer to the previous question, I'm going with Washington with the return of not just Delle Donne but also Hines-Allen after the 2020 All-WNBA Second Team pick missed 10 of the Mystics' 18 games prior to the Olympic break. That's a huge boost to a short-handed frontcourt.

Lee: Yes, the Wings entered the break on a three-game losing streak, but the remainder of their schedule looks favorable for a possible playoff push, with six of their nine games at home. Ogunbowale is seventh in the league in points per game and leads a team that while young (the Wings are the youngest in the WNBA), showed flashes of potential in each of their matchups against the Storm, which included a buzzer-beater upset.

Voepel: Let's talk about the Los Angeles Sparks. Nneka Ogwumike is back after her knee injury and the Olympic disappointment. There was a scary moment in the first half of Tuesday's 85-80 overtime victory against Atlanta where Ogwumike was hit in the face and then fell awkwardly and left the court with everyone fearing she re-injured her left knee. But coach Derek Fisher said she was probably more "freaked out" than anything; she returned in the second half and nearly had a triple-double, with 13 points, nine rebounds and nine assists.

Ogwumike played 37.5 minutes Tuesday and just less than 31 minutes in Sunday's 75-70 win over Indiana, shooting just two free throws between the two games. Fisher has not hidden his displeasure over that, and has tied it to a narrative that Ogwumike and the Sparks (who had no one in the All-Star Game) are not being respected.

"We have to find a way to make sure that she's being treated the way a player of her caliber deserves to be treated," Fisher said Tuesday. "When we watch the men's game, we don't consistently see former MVPs and All-Stars and Olympians going to the free throw line two times when they play 40 minutes, on a regular basis. You just don't. So it shouldn't be different over here."

This is a familiar kind of "us-against-the-world" coaching tactic, but there is something to it. Candace Parker left for Chicago as a free agent, top draft pick Jasmine Walker was lost early on for the season with a knee injury, Maria Vadeeva isn't going to play in the WNBA this season, Chiney Ogwumike is still out injured -- but the Sparks remain in the playoff race. Kristi Toliver's game-tying buzzer-beater Tuesday helped a lot, giving them the chance to get the OT win.