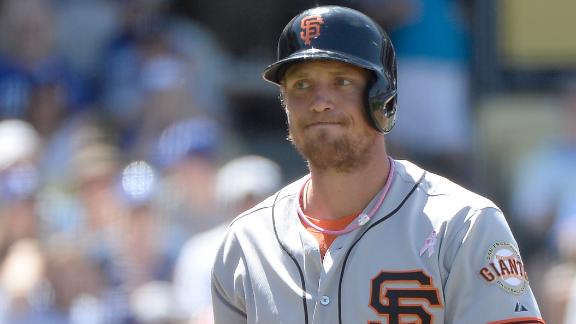 The Giants right fielder had his motorized scooter stolen from a restaurant parking lot Sunday night, but instead of bringing a report to the police, Pence is taking matters into his own hands and offering a reward -- a signed bobblehead that shows him riding the scooter -- with no questions asked.

"I try not to be too attached to things, even though I have a bobblehead with it," Pence said Monday, according to CSNBayArea.com. "I felt it was an extension of me."

Pence doesn't lock the scooter because of its unique charger.

"It won't last very long," Pence said. "I try to trust people. Apparently somebody needed it more than I do."

Ahhhh someone stole my scooter! :(

- Hunter Pence (@hunterpence) May 26, 2014After receiving support and numerous comments from the online community, Pence followed up with a tweet that included a picture of his ride.

Thanks for the support everyone! If you're keeping an eye out here's what it looks like. #stolemyscooter pic.twitter.com/kw2NccqrpR

- Hunter Pence (@hunterpence) May 26, 2014Still, the incident hasn't made Pence think any less of the California city.

"No, I'm not mad at the city," he said. "The support and comments on Twitter were more uplifting than anything. It made the gut shot better. It made it fun. ... I found a way to get some joy out of it."

Pence received the scooter, which has custom stickers with his name and No. 8, three weeks after his July 2012 trade to San Francisco.

Pence, who is often smiling and joking with teammates in the clubhouse, rode a backup scooter to the game against the Cubs on Monday.

"He had a sad face on this morning,'' Giants manager Bruce Bochy said. "I've never seen that.''

Pence said he's already working to upgrade the backup scooter's battery power because it won't carry him all the way to the ballpark. He said he won't use a car.

"I can't fathom driving for some reason,'' he said.

Pence still has hope he will get his favorite scooter back. He said he even had a dream Sunday night that he saw a man riding it down the street.