In her final season, Plenette Pierson turns out to be the perfect addition to Minnesota Lynx 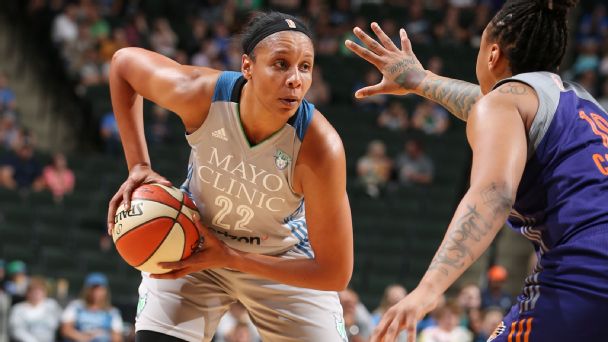 MINNEAPOLIS -- Plenette Pierson announced her retirement from the WNBA in what her friends might describe as a totally Plenette way: spontaneous and unconventional, though with her heart in the right place.

It happened Aug. 18 at the annual Minnesota Lynx Breast Health Awareness Night, following a game against the Indiana Fever at the Xcel Energy Center. The Lynx were auctioning off the pink jerseys they wore that night, as many teams do. Pierson, the veteran backup power forward, thought her jersey might fetch higher bids if fans knew she wasn't returning next season. So she blurted it out.

"I had been thinking about it for a couple of years now," Pierson said earlier this week. "I had planned to let the cat out of the bag on my birthday [Aug. 31]. It just seemed like the right opportunity, the right time. If I could make more money for the cause and the research by announcing it a little bit early, I was all for it."

The team was caught off-guard; it took several days for the Lynx to confirm the news. Lynx reserve guard Jia Perkins, Pierson's teammate for three seasons at Texas Tech, didn't attend the auction but said she wasn't surprised, given that Pierson discussed it openly with teammates.

Pierson, who has played for three franchises in four years and signed a one-year contract with the Lynx, neglected to tell Cheryl Reeve, but the Lynx coach connected the dots.

"Ten or 12 games into the season, I said, 'What are you thinking about for next year?'" Reeve said. "I said, 'We have great resources here for an aging player. I think we can help you, some things to slow down the aging process.' ... It was my way of getting a pulse, trying to find out. I think the reaction I got was soft, and so I knew at that point she probably wasn't going to play next year."

Reeve and Pierson, 36, have history. They won two WNBA titles together with the Detroit Shock, when Reeve was an assistant to Bill Laimbeer and Pierson was one of the league's top reserves.

The Lynx are unique in the WNBA in that Reeve consults her four captains -- Seimone Augustus, Rebekkah Brunson, Lindsay Whalen and Maya Moore -- before general manager Roger Griffin acquires a player in trade or free agency. Reeve promised them she would never introduce "a knucklehead" to the group, jeopardizing the ethos that brought the Lynx three titles and six Finals appearances in seven years.

Signing Pierson to back up Brunson might have seemed risky to someone who knows Pierson only for her rugged style, a Twitter handle that doubles as a job description (@DaEnforcer33) and her 2008 entanglement with then-rookie Candace Parker that set off an on-court brawl.

People with even longer memories recall Texas Tech coach Marsha Sharp suspending Pierson almost her entire junior year, for reasons the school never revealed. Pierson eventually made peace with Sharp and, as a senior, led the Lady Raiders to the Elite Eight. Pierson said she matured and learned from the experience, and three years ago Texas Tech inducted her into its Hall of Fame.

With the Lynx, Pierson proved a popular edition.

"I think she's fit in well," Perkins said. "She doesn't change who she is. Everybody embraced it. She's a hard-nosed player with a loud personality that's pretty cool."

(Perkins, 35, might be considering retirement herself. She remained noncommittal about next season. "I don't know. We'll just see what happens," she said.)

On Monday, Pierson's big personality was on full display. The day after the Lynx came out flat and lost Game 1 -- before what promised to be a testy video session with Reeve -- Pierson sat in a folding chair on the court at Williams Arena yukking it up with Augustus. With all the chairs near Pierson occupied, Augustus dragged over an orange cooler to sit alongside her.

"This is an amazing bunch," Pierson said. "Every day, I come in the gym and I'm smiling. I'm happy to be in the midst of this bunch. There's so much knowledge on this team, so much competitiveness. It seems like everybody on this team is me. They embody everything that I embody. It's like having 11 other me's. Except Seimone."

That cracked them both up.

"She's like the little sister," Pierson continued. "She's loving that I'm here. She has to be near me. It's great. She's a great player. She's funny. She brings a little light to every situation."

In signing Pierson, Reeve sought a veteran presence such as Taj McWilliams-Franklin, another former Shock standout whose basketball IQ, work ethic and tenacity pushed the Lynx to their first championship.

Pierson is no longer the player who won the WNBA's first Sixth Woman of the Year Award in 2007, but she hardly looks finished. Playing limited minutes behind the All-Star Brunson, Pierson averaged career lows of 5.2 points and 2.2 rebounds. Her numbers rose to 9 points and 3.7 rebounds when she started the four games Brunson missed with a sprained left ankle.

Reeve leans on her starters at playoff time, so Pierson isn't seeing much action, averaging 1.2 points and 1.2 rebounds. Pierson had chances to help the Lynx in Game 2 but missed a driving layup and two foul shots in the third quarter. Still, Pierson's teammates are urging her to return.

"I don't think they think I'm serious about it," said Pierson, who said she isn't sure what's next for her but might be interested in coaching. "There's been a lot of asking, come play another year, play another year, you're not really leaving. It's a great feeling they want to play with me another year and have me around. But I'm 36. The way I play, I don't think I can last much longer."

Already, the Lynx are trying to win a title for Brunson, which would give her a WNBA-record five championships, four with Minnesota and another with Sacramento in 2005. But they want to send Pierson out with another title, too.

"She's just a joy to be around," Reeve said. "When we talked about her coming here, I wanted her to go out on top, like when we brought Taj here. I wanted Taj to go out in that way. I would like nothing more than to do that for Plenette because that's what she deserves."