'It's either hoop or you sell dope': Patrick Beverley never forgets his humble beginnings 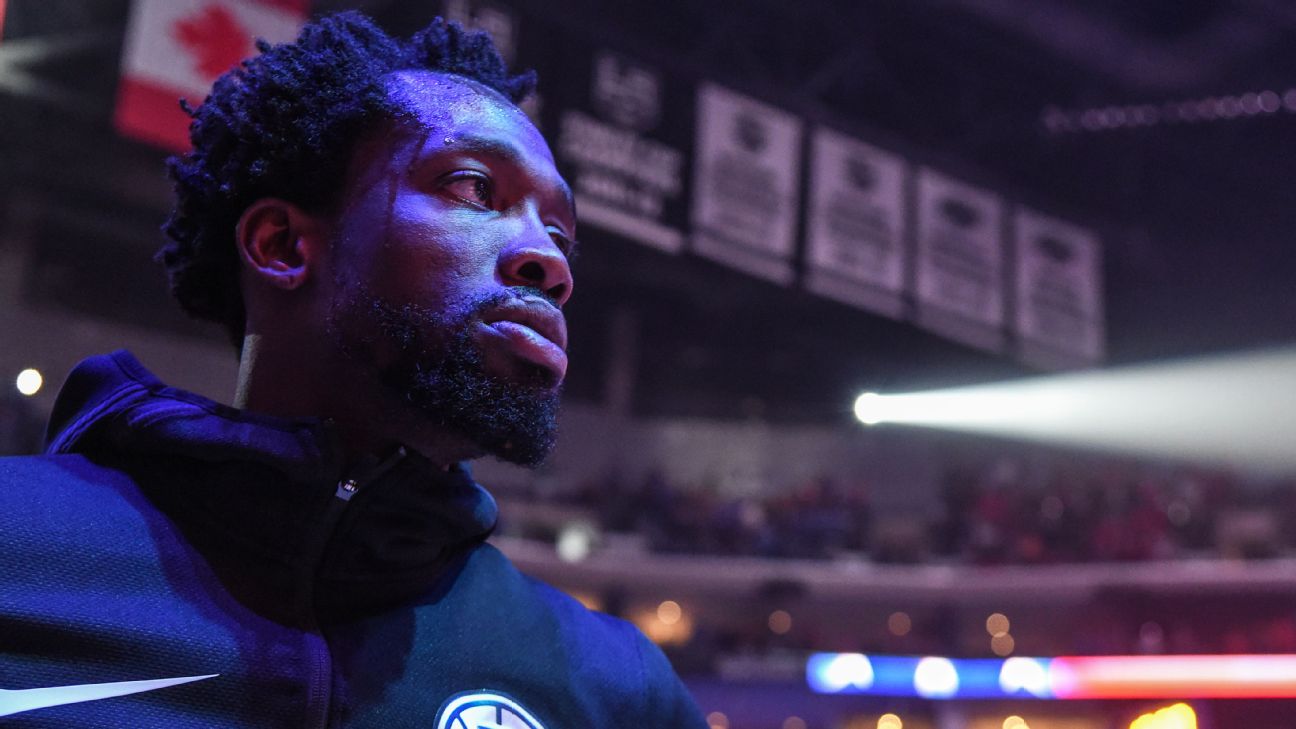 THE LIGHTS WERE off and lasers were beaming in all different directions. The public-address announcer's voice boomed over the speakers at Staples Center as the LA Clippers' starting lineup was introduced for the season opener against the Los Angeles Lakers.

Beverley tapped his chest and pointed skyward. The Clippers guard does this before every game.

He waited for each Clipper announced, meeting them with personalized greetings: a fadeaway jumper with Landry Shamet, a hook shot with Ivica Zubac.

Unlike Beverley, his teammates were introduced using their college -- or in the case of Zubac, the nation where he played before joining the NBA. Only Beverley was introduced with the city in which he grew up.

"From Chicago," Clippers coach Doc Rivers said of Beverley's tenacity. "He gets rebounds that he has no business getting. I think a lot of that is just his grit. And he believes it's his ball."

Entering this season, Rivers wanted Beverley to continue to play with the anger and intensity that made him one of the leaders of the team. But Rivers made it clear that he wants Beverley to play with emotion, not be emotional.

Channeling his emotion is something Beverley has been working on in recent years, but he has been growing since one fateful summer in Chicago.

When asked to consider what his life would be without professional sports, the Clippers guard doesn't hesitate: "I probably would've been the best drug dealer in the world."

K-TOWN SITS ON the west side of Chicago, between North Lawndale and West Garfield Park. Beverley was back home for a few months during the summer of 2008, in this area that got its nickname because all of its streets start with the letter K.

He had been suspended from the University of Arkansas basketball team for his junior year for plagiarism. Upon returning home, Beverley was faced with a dilemma -- pursue a pro career or try to survive by earning a living on the streets.

With a 2-year-old son and a newborn daughter, Beverley had a $5,000 advance payment from an agent but felt his choice was made.

"Mouths need to be fed, you know?" Beverley said. "Coming from where I come from, I didn't have the luxury of having a trust fund. Or money from generations. Or the luxury of hoppin' into the family business, you know?

"It's either hoop or you sell dope."

LISA BEVERLEY JUGGLED as many as three jobs trying to feed her son, Patrick, and pay for a one-bedroom apartment in inner- city Chicago as a single mom. While her mother, aunt and cousins took turns helping raise Patrick, Lisa worked for the Illinois phone company, then known as Ameritech, and was an overnight dispatcher for two trucking companies. Whatever few hours were left in a day after that, she squeezed in appointments doing nails.

Lisa got their first apartment on the corner of Parkside and Washington when Patrick was 4. She tried to shield her son from the realities of their unforgiving environment, like stepping over someone doing cocaine in the stairwell. But Patrick noticed more than his mother ever realized. He saw the drug-peddling boyfriends she dated for protection.

He learned how to push drugs.

One of them, Adlai "Dexter" Hood, was a dealer she dated for four years. He was shot eight times and killed in his car, according to Lisa. Patrick named his oldest daughter Adlaia after him.

Lisa had no idea that Patrick sold drugs after he left Arkansas; he told her only a few weeks ago. But he didn't tell her how he learned to push.

"Oh, Jesus!" Lisa blurted at Staples Center when told of Patrick saying he learned the tricks of dealing from some of her boyfriends. "It breaks my heart. I feel like I failed him."

BEVERLEY WAS MAKING good money selling marijuana, putting what he learned to use. He was doing well. But in August 2008, as a light flickered from red to green at an intersection, Beverley's white Dodge Magnum was struck by a vehicle running a red light.

His car flipped three times. Not wearing a seat belt and with the windows down, Beverley somehow was able to climb out without a scratch. Beverley remembers the EMT in the ambulance afterward telling him that he shouldn't be alive.

But it's what Beverley says he clearly heard in the car amid the explosion of twisting metal and shattering glass that has stuck with him to this day.

"I heard a voice saying we would be OK," Beverley said. "It had to be God."

He escaped physical trauma. But a few weeks later, Beverley suffered an emotional scar that has never healed.

Beverley grew up an only child, but to him, Donovan Morris was like his little brother. The two were three years apart but inseparable.

"They were raised like brothers," Beverley's mother said. "[His grandmother] adopted a lot of foster kids. Pat spent a lot of time there, so they were all raised in one house."

But on a Saturday night a few weeks after his car accident, Beverley drove Morris to West Kamerling Avenue in Humboldt Park. Something felt off.

He repeatedly tried to convince Morris to head back with him, to go eat at his grandmother's place as they had done so many times.

Not long after Beverley drove off, he got a call telling him that Morris was dead, shot multiple times at around 11 p.m. Beverley and his mother went to the hospital to identify the 16-year-old's body.

"I shouldn't have brought him over there," Beverley said, replaying the moment in his head like he has thousands of times before. "I should've grabbed [him]. Anything, you know?

"You Monday night quarterbacking, you can think of anything. I took that on the chin a lot."

Two days after Morris died, Beverley got a call to play overseas in Ukraine.

"I'm going to play basketball and not be in his shoes," Beverley said of what ran through his head 48 hours after Morris' death. "People talk about like, I don't know, sacrificial lambs and all that. And of course, I don't compare him to a lamb, but his sacrifice kind of woke up our family."

RIVERS HAS SEEN too many talented basketball players never make it out of Chicago, which also is where the coach hails from. For every Isiah Thomas or Derrick Rose, there are dozens of Chicago prodigies.

This year is the 25th anniversary of "Hoop Dreams," and Rivers remembers how one of the documentary's main stars, Arthur Agee, was once an inspiration to a generation of Chicago kids. Agee also was part of the documentary sequel -- "Hoop Reality" -- that focused on Beverley, another prep star to follow in Agee's footsteps at John Marshall Metropolitan High School.

While kids in Chicago today might want to be the next Anthony Davis, Rivers said there's another blueprint when reality hits -- and Agee agrees.

"[Beverley] is the new grit guy for these guys who always think they are going to come into the league and score 20 points and have an immediate impact. Patrick Beverley represents all those hard-nosed guys who had to go overseas and had to work," said Agee, who does public speaking and is working on a new documentary with "Hoop Dreams" co-star William Gates.

"He is the smallest version of Dennis Rodman," Agee added. "He is a point guard Dennis Rodman. And don't nobody else in the league play like him, pick up guys 94 feet and twist and turn guys."

But Beverley did something Agee never did: make it to the NBA. And he did so without a lottery pedigree or the help of a marquee basketball school, instead going from a second-round pick who was cut by theMiami Heatin 2010 to a two-time NBA All-Defensive Team selection who played himself into the three-year, $40 million contract awarded by the Clippers this past summer.

Beverley used part of that money to buy his mother a six-bedroom house at Sienna Plantation, not far from Houston, where Beverley played with theRocketsfrom 2013 to 2017. He also told her to go on a shopping spree, but she couldn't bring herself to do it.

After years of fighting to prove himself, Beverley's spot in the NBA is secure. He has carved out a reputation as an elite defender. And this season, he has taken another step forward as a rebounder: His 6.9 boards per game would be the second most by a player 6-foot-1 or shorter in NBA history.

Still, it's vital to Beverley to never forget his humble beginnings. He visits Los Angeles hospitals and gives food at area shelters, and he and his mother are a part of an initiative along with the Clippers and a sponsor, Honey, to provide affordable tickets on game days.

"Coming from the projects, we used to sneak into the United Center, watch some games; they chased us out and everything," Beverley recalled during the preseason. "[That] I am fortunately able to get people $10 tickets is crazy. Unbelievable feeling."

IT'S A WEDNESDAY night matchup against the Boston Celtics in L.A. as the Clippers' starting lineup is introduced.

Beverley is no longer the lone Clipper introduced using the town in which he grew up. But before the contest starts, he still taps his chest and points to the air. He does this before every game for Morris.

It's a nightly reminder of why he is here and not on some dark corner of a street in K-Town. 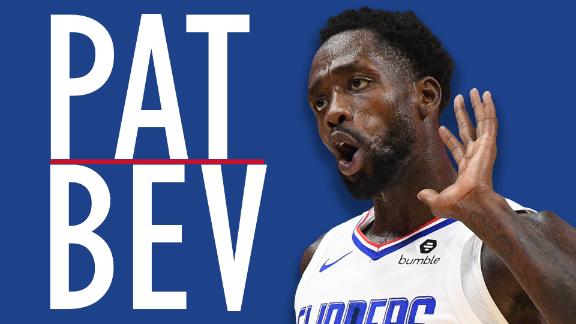 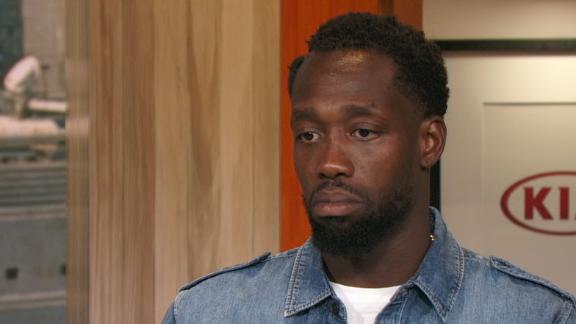